Halt and Catch Fire reboots again in its fourth and final season, which is now 10 years removed from when we first met tech visionaries Joe MacMillan, Cameron Howe, Gordon Clark and Donna Emerson.

Saturday’s two-hour premiere features the AMC drama’s second major time jump in just three episodes, quickly moving the story along to the year 1994. It’s a creative decision that has not only given creators Christopher Cantwell and Christopher C. Rogers a means to have Joe and Cameron reconnect, but one that perfectly aligns with the history of the World Wide Web.

“We knew at the end of Season 3 that we wanted to get to this idea of a browser, but what happened in technological history is that there was this three-year lull where the Internet had been created [but] nothing was happening,” Rogers tells TVLine. “So what must that be like for Joe, who has always had this sixth sense about the future, to think he sees it and then just be met with this silence? So we wanted to pick him up there, especially to coincide with this deep uncertainty about what’s going on with Cameron.”

Cameron, meanwhile, faces an uncertain future once she returns from Tokyo. Husband Tom eventually fell for another woman, after Cameron revealed she had sex with Joe. What’s more, Atari is shelving her next video game, leaving her career in shambles. All of this is revealed over the course of an intimate, days-long phone call with Joe, during which the former bedmates connect on a much deeper level.

The first two episodes also check in with ex-spouses Gordon — who is happier than ever and running successful ISP CalNect out of Mutiny’s former headquarters — and Donna, who is now well on her way to becoming Enemy No. 1 for the original Cardiff Electric trio. She puts Bosworth in charge of Rover, a startup looking to build the Internet’s first search engine. The only problem is that the idea was first presented to her by Gordon, based on a concept thought up by Joe.

Below, Cantwell and Rogers expound on Joe and Cameron as potential endgame, weigh in on the fractured relationship between Cameron and Donna and confirm a blink-and-you-missed-it cameo by a certain GLOW star.

TVLINE | Was it always your intent to have Joe and Cameron find their way back to each other?
CANTWELL | I would say the narrative naturally found its way there. They’ve been through a lot, together and apart. Their relationship has always been a tumultuous one, and yet, they’ve always found themselves to be in each other’s gravity. This season, as everyone reflects on their own growth and maturity, we thought it was interesting for the two of them to reconnect in yet a new way — a way we haven’t seen before.

TVLINE | Joe and Cameron always seem to circle each other’s orbits when other aspects of their lives aren’t going according to plan. Are we building to a point where they can be together and still thrive outside of the relationship?
ROGERS | I think that’s a really interesting observation, because I think Halt and Catch Fire in a lot of ways has been a story that has always gone towards the idea of right idea, wrong time. I think in the fourth season, we kind of gave [Joe and Cameron] their last best shot.

TVLINE | Have we seen the last of Mark O’Brien as Tom?
CANTWELL | He may show up here and there. There’s a lot left on the table.

TVLINE | Gordon has really loosened up between seasons. (Three words: Blue Man Group.) Was it important to you guys to show him on a bit of a high after spending so much of the last two seasons in a constant struggle, both professionally and with his health?
CANTWELL | It felt right, story wise, to take Gordon in a new direction. He’s been through a hell of a time… and he’s been tempered, I think, by failure: his divorce from Donna, his connection with Cameron, the constant ebb and flow of his relationship with Joe and his physical illness… We see him cherishing the value of the connections in his life, with his kids and with his friends, [which] we haven’t been able to do with this guy because he had some things he needed to go through first, and some things he needed to learn before he could get here. 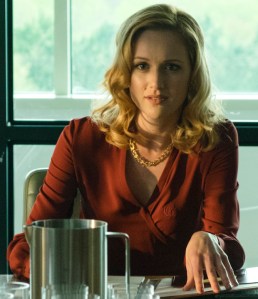 TVLINE | All these years later, Donna and Cameron can barely stand to be in the same room together, as made evident when Donna came to pick up Joanie and Haley. Is there any hope at all that those two might bury the hatchet?
ROGERS | We really want to play fair with both the violence of the initial betrayal of Donna voting Cameron out [of Mutiny], and then Cameron pushing Donna out in the finale of Season 3. I think on some level, these two know they did their best work together. I think there’s a sadness about what was… they had allowed themselves to be vulnerable with each other in a way that maybe they haven’t even brought to their romantic relationships, and I think that makes the ensuing wound that much worse. So, you know, they see each other on accident, and it won’t be the last time they see each other. But if they can ever move past both the personal and professional wounds of where they’ve been? We’re sure interested in seeing them try.

TVLINE | Speaking of Donna, I have to ask about that unannounced guest star. GLOW‘s Chris Lowell spends the night with Donna in the first episode, but is on screen for all of 10 seconds and has zero lines. Was that just a one-time cameo, or is this a character we’ll see again?
ROGERS | [Chris] actually helped us out. We needed somebody great for that role — a small role and not the kind of thing an actor of that caliber would normally come help us out with. We were incredibly lucky to get Chris, who we love on GLOW and everything he has ever done. I wish I could tell you that he was going to be a huge part of what we’re doing this season, but that falls more under the category of a wonderful favor that a very talented actor did us.

What did you think of Halt and Catch Fire‘s final season premiere? Grade it via the following poll, then chime in with your thoughts below.