Swoon all you want about that time the Mother of Dragons first met the King in the North. For a certain subset of Game of Thrones fans, Daenerys’ most important Season 7 moment took place in Sunday’s episode, when she and Ser Jorah once more breathed the same air. 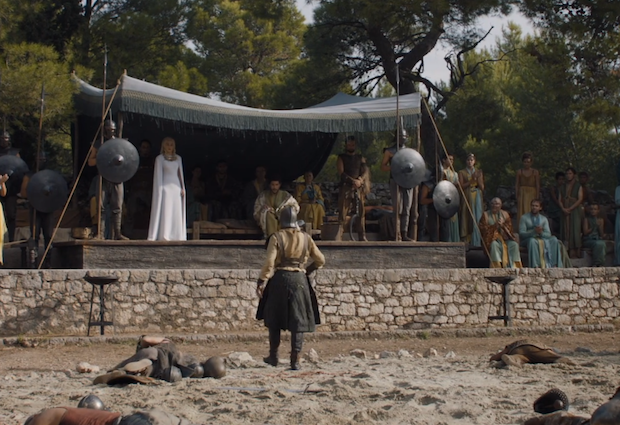 “You look strong. You found a cure?” she asked, beaming. “I wouldn’t be here if I hadn’t,” he answered, equally over the moon before once more offering himself for her service.

If you want a refresher on the man who bent the knee to Dany long before anyone else did, here’s a quick backgrounder on Khaleesi and her knight. Back in Season 1, Ser Jorah Mormont attended Daenerys’ wedding to Khal Drogo. The exiled knight vowed to serve her as he’d served her father, and he stuck with her through the death of her husband and her rise to power among the Dothraki. Along the way, Jorah also fell into a deep well of admiration/romantic love for the young queen. Sadly, she didn’t feel the same.

Then there was a little jealousy, a little revealed treachery, a little banishment, a little uncurable illness and a lot of undying devotion, which brings us to this week’s “Eastwatch” and the touching reunion of two of our favorite Thrones characters.

We were so into the idea of Jorah’s return to #TeamDaenerys that we thought we’d pull together a dragon’s flight down memory lane, all the better to savor the ser’s return to his sovereign — especially if that whole Eastwatch mission goes awry. Click on the photo gallery above to revisit key moments from the ballad of Jorah and Daenerys.