If nothing else, Epix’s reboot of Get Shorty — debuting this Sunday at 10/9c — can serve as a cautionary tale to other networks: Not every old movie and TV show needs to be rebooted, you know.

Get Shorty started life as a 1990 Elmore Leonard novel, then became a 1995 movie starring John Travolta as a charming mobster who puts his skills of persuasion to work as a movie producer. It was a big enough hit to merit a sequel (2005’s Be Cool), but it’s not a beloved classic by any stretch. So it’s a bit puzzling that Epix would choose to remake Shorty as a TV series… and even more puzzling that they’d keep the basic concept and scrap everything else, starting over with new characters and a new-ish story. (Was there really a huge demand out there to expand the Get Shorty fictional universe?)

The result: a confused, and confusing, series that stretches its core concept too thin and never really has a compelling reason to exist. Epix, a young pay-cable network still searching for an identity, is surely hoping this can be their first breakout hit — but it’s more of an ill-conceived misfire. 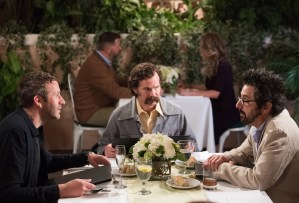 The action centers on mob enforcer Miles Daly (Chris O’Dowd), who’s looking for a more stable career path to win back his estranged wife and teen daughter. And he sees a way out when he and his buddy Louis (Sean Bridgers) whack an aspiring screenwriter, which leads to a hot screenplay landing in his lap (albeit soaked in blood). Determined to make it in showbiz, Miles takes the script to B-movie producer Rick Moreweather (Ray Romano) in hopes of putting it on the big screen… and learns that his new industry has its own share of liars and thieves.

Shorty tries to balance crime drama with Hollywood satire, but neither half is fully successful. Romano is a welcome addition to any TV show, and he has a lot of fun as the cynical, spiky-haired Rick, who’s exiled to a forgotten corner of the studio lot. But we’ve seen a hundred showbiz parodies before, and Shorty‘s take on the movie business lacks any distinct bite. Plus, it feels oddly dated; Rick seems like a sleazy straight-to-video producer from the ’90s. Topher Grace has a hilarious cameo as a pretentious actor on one of Rick’s films (“I’m just trying to play a human being. Sorry.”), but it’s too brief to make any lasting impact. 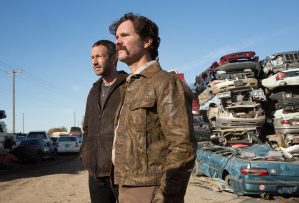 And the non-Hollywood crime scenes are just a bore, a faint carbon copy of better crime dramas. Shorty is shot in Albuquerque, and is clearly going for that dusty, panoramic Breaking Bad vibe, but doesn’t have a tenth of the style or craftsmanship of that great series. It has an unappealing, dingy visual palette, leaving many scenes frustratingly drenched in shadows, and an insistently peppy jazz score that keeps reminding us this is a comedy… even while people are being murdered. Elmore Leonard’s name is synonymous with snappy, hard-boiled dialogue (Justified fans don’t need to be told this), but the dialogue here just doesn’t have that trademark Leonard crackle.

The fatal flaw here may actually be the hour-long format: Get Shorty could maybe work as a rapid-fire half-hour comedy, but at 60 minutes each, the episodes feel bloated and sluggish as they drag their feet getting to the good stuff. (The pilot alone is two-thirds the length of the entire original film!) We end up spending time with Louis’ brother at church, and the dead screenwriter’s lunkhead roommate, and Miles’ wife’s new golf-pro boyfriend… the storylines branch out too far, too fast, and we lose the plot in the process.

The cast is a saving grace, though. We know from Bridesmaids that O’Dowd is blessed with a natural charm on screen — even though Miles never gets his hands dirty enough to lend him any real menace. He and Romano have nice chemistry in their too-rare scenes together. And Bridgers (Rectify, Deadwood) is a real treat as the grizzled, unflappable Louis, who’s unimpressed by Miles’ Hollywood aspirations at first (“You talk to a writer for three minutes, and suddenly you’re Marvin Scorsese?”) but soon gets seduced by the glamour as well. You almost wish these actors could reunite in a different project that could offer them some fresh storytelling… and not be tethered to a reboot that exactly no one was clamoring for.

THE TVLINE BOTTOM LINE: Despite a top-shelf cast, Get Shorty is an unnecessary reboot that stretches the original concept way too thin.