THE PERFORMANCE | The title of the HBO dramedy’s Season 2 premiere is also an entirely accurate description of the performance given by and awesomely typical of the series’ luminous leading lady/co-creator. Over the course of just 30 minutes, Rae, who also (as she often does) wrote the episode, reminded us 100 times over why we felt so strongly that she should have been an Emmy nominee.

For starters, as the character who shares her first name endured a series of brain-numbing Internet dates, she was hilarious, playing Lawrence’s unfaithful ex as both bubbly and embittered before escaping into a rap that was so gleefully self-loathing, we wanted to slip her the number of BFF Molly’s shrink. If that wasn’t enough to land the actress a spot on your list of TV’s funniest stars, the deal had to have been sealed by the montage in which Issa imagined the zillion possible ways that she could hand over to Lawrence his summons for jury duty. Sorry, make that jury booty.

Of course, since Rae is as skillful at drama as she is comedy, she also shone during the poignant moments of “Hella Great,” making us feel the full weight of Issa’s reluctant acceptance that her relationship with Lawrence was really over and then letting us glimpse the restored optimism with which she was left by their wham-bam-thank-you-ma’am hookup. As the episode ended and her face filled, ever so subtly, with hope, we couldn’t help but think, yeah, she really could turn the world on with that smile. 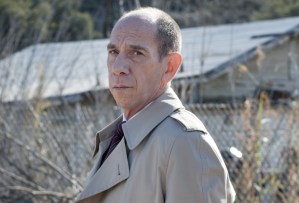 | First things first: How wonderful has it been to have Miguel Ferrer on our screens, reprising his role as Twin Peaks‘ Albert Rosenfield, months after his passing? The actor, though, squeezed in no mere cameo for what would be one of his last hurrahs. No, Albert has been a fixture in this revival, the quiet calm to FBI boss Gordon Cole’s loud-talking storm. It’s a largely reactive role, but Ferrer made the most out of every scene, as witnessed when Albert didn’t know quite what to make of Gordon’s encounter with an unseen wormhole, yet had the presence of mind to pull his pal back from the brink of… something. Or, as he put up with Diane’s vulgarity and other vices whilst privately puzzling over her agenda. Eleven episodes in, the lyrics remain a Lynchian jumble, but for Ferrer this was a helluva swan song. 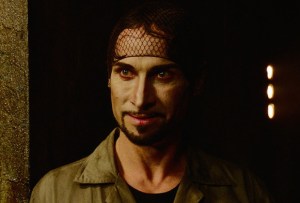 | This week on Syfy’s Blood Drive, Julian Slink was down but far from out, and Colin Cunningham invited us along for the rollicking ride as the ejected emcee orchestrated his return to the spotlight. Starting with his initial monologue (performed for a fellow, unappreciative Heart grunt) and subsequent dispatching of same, it was clear that Slink’s wheels were churning. As he then tricked Christopher to do his bidding, Cunningham’s elocution and body language changed, emulating his puppet’s certain swagger. The true treat, of course, came when Slink’s scheming bore fruit, and he leveraged Old Man Heart into letting him again rule the road-racing roost. But as an added bonus, Cunningham practically purred as Slink boasted of how he coerced Grace, The Gentleman et al into entering the titular contest, proving beyond all doubt he is the master of mayhem.