“Heartwarming” is a tricky word to use in a TV review: It brings to mind those insufferably corny, 7th Heaven-type shows where the family has a big group hug at the end of each episode. (Yuck.) But Netflix’s whimsical new family comedy Atypical — debuting Friday, Aug. 11 — manages to sidestep those landmines and deliver something that truly warms the heart, with a cast full of sweet-natured characters, a bracing dose of melancholy and a terrific lead performance from Keir Gilchrist. 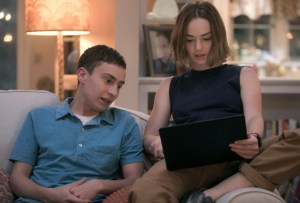 Gilchrist’s character Sam is an autistic teen on the high-functioning end of the spectrum, and we learn about his condition through his narration: He has trouble socializing, and doesn’t like to be touched. He’s honest to a fault, and irritatingly literal. (When his therapist tells him to “put himself out there,” he asks, “Out where?”) He rattles off arcane facts about Antarctic sea life to strangers, whether they want to hear them or not. (Mostly, they don’t.) He’s hopelessly awkward… which, honestly, gives him a lot in common with just about every other teenage boy out there.

Making the lead character a kid with autism threatens to take Atypical into after-school-special territory, but again, creator Robia Rashid (How I Met Your Mother) nimbly navigates away from schmaltz. The tone is more adult than you might expect: Sam abruptly announces in the pilot that he’d like to have sex as soon as possible, and his quest to lose his virginity is hilariously academic, as he diligently researches sex and dating like it’s a school science project he’s being graded on. Atypical does share some similarities with ABC’s Speechless, but it isn’t as frantic or self-consciously “quirky”; it’s more patient, and isn’t afraid to dive into the very real sadness its characters experience. 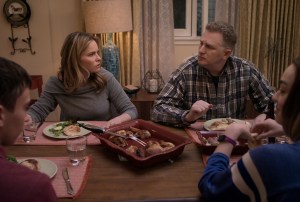 Because it’s not just Sam: His family has their own set of challenges. Jennifer Jason Leigh has a haunted, jittery energy as his overprotective mom Elsa, who’s a bundle of frazzled nerves after years of carefully doting on her special-needs son. His dad Doug (Michael Rapaport) is more laid-back, but aching to find some way to connect with his son. His track-star sister Casey (Brigette Lundy-Paine) is jaded and sarcastic, and has her own growing pains to go through. They’re all far from perfect, and Sam’s condition affects each of them in different ways, but they all band together to get through it — and we end up loving them for that. (Plus, comedian Nik Dodani is charmingly sleazy as Sam’s horndog coworker Zahid.)

A show like this sinks or swims on the lead performance, though, and Gilchrist (who previously played gay son Marshall on United States of Tara) makes the whole thing work as Sam. He skillfully gives us a window into the mind of this closed-off character, and he doesn’t soft-pedal Sam’s ugly meltdowns, either, when things don’t go as planned. There’s some talk that an autistic actor should’ve played this role, but that complaint is shortsighted: An actor of Gilchrist’s caliber can do a tremendous job of humanizing a condition like autism, and he proves that here.

Gilchrist’s performance is so strong, in fact, that Atypical suffers a bit whenever Sam’s off-screen. Plus, there’s one unpleasant plot point with the parents that feels like it’s inserted just for the sake of being “edgy.” But even the non-Sam scenes have the same warmly empathetic feel as his scenes do. And with a season of just eight half-hour episodes, Atypical is a nicely digestible binge. (Hey, that’s a real consideration these days.) Four hours spent in the company of an endearingly flawed family… that’s quality time right there.