We know you’re the Mother of Dragons, Daenerys, but you might want to be careful about how you handle snakes, too.

A new photo from this Sunday’s Game of Thrones (HBO, 9/8c) hints at possible drama among the member of Team Khaleesi. Take a look: 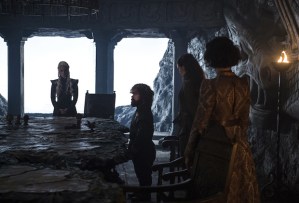 See the woman on the right with her back turned to the camera? That’s Ellaria Sand, aka Oberyn Martell’s lady, aka mother of the Dornish Sand Snakes. Late last season, Ellaria pledged her loyalty to Daenerys — mainly out of a hatred for the Lannisters — but as far as we can tell, she wasn’t aware that Dany had named Tyrion Lannister the Hand of the Queen.

Given that Ellaria isn’t one to hold her tongue (or her knife) when a situation does not meet her expectations, we’re guessing that the scene above might not go so smoothly once Ellaria sees that Tyrion is Daenerys’ right-hand man. (Anyone want to bet whose side Yara Greyjoy would take if a brouhaha broke out? After that amazing bonding/flirting scene last season, we’d put our money on the Queen of the Andals and the First Men.) Perhaps Ellaria is the “unexpected visitor” that the episode’s cryptic synopsis told us Daenerys would receive?

Then again — as a reader just pointed out — Ellaria was behind Myrcella’s death, and Myrcella is Tyrion’s niece, and that isn’t likely to sit well with khaleesi’s newly appointed Hand.

Elsewhere in the new shots, Jon talks with Littlefinger, Sansa coldly looks cold and Sam hangs out with the Archmaester. Click through the gallery above — or access it directly here — then hit the comments with your predictions about the episode, titled ‘Stormborn.’