It’s never a great sign when a network show debuts in the dead of summer, more than a year after it was first announced. But those red flags make sense when you actually watch Midnight, Texas (premiering Monday, July 24 at 10/9c on NBC) — an overstuffed, often ridiculous supernatural drama that somehow manages to make a town filled with magical creatures seem crushingly dull.

I can’t pinpoint the exact moment the show lost me: Maybe it was the talking cat. Or the utterly unconvincing fight between a vampire and a were-tiger. Or the dumb hick cop who, when a witch levitates and crushes the car he’s sitting in, insists it’s just an earthquake. I just know that I was laughing more often at Midnight‘s unintentional missteps than the actual jokes in the script — again, not a great sign. 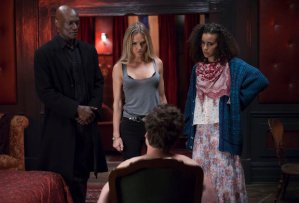 The action centers on ghost-spotting psychic Manfred (The Borgias‘ Francois Armaud), who takes his dead grandma’s advice and moves to the sleepy town of Midnight, Texas — which turns out to be a haven for supernatural beings of all stripes. There, he meets vampire Lemuel (Peter Mensah), witch Fiji (Parisa Fitz-Henley), angel Joe (Jason Lewis) and gun-toting assassin Olivia (Arielle Kebbel). Why include a presumably human assassin in a town full of supernatural creatures? That’s just one of the many glaring questions this show is hoping you won’t bother to ask. (Manfred also strikes up a romance with bartender Creek, played by Parenthood‘s Sarah Ramos, who seems normal enough, but probably turns out to be a bat or something.)

If this sounds like a lot of crazy for one show, well, it is. You could easily cut out half of the main cast and you’d still have far too much going on. Vampires and were-tigers and ghosts (oh my!)… it’s gilding the supernatural lily, and then gilding it again a few more times to be safe. And even with all that creature-feature overkill, the end result still feels bland. Instead of delving into these characters and giving us even a shred of a reason to care about them, Midnight just throws more creatures at the wall, hoping they’ll stick.

Over-the-top crazy can be fun, to be sure, but Midnight never commits to that, or any consistent tone. It’s too self-serious to be genuinely funny, and too goofy to be taken seriously. It’s kind of like AMC’s Preacher, but without the gonzo, kick-ass abandon. It has a lot in common with HBO’s vampire saga True Blood — including book author Charlaine Harris — but it’s not nearly as clever or sexy, and feels neutered by comparison, since it airs on network TV. Basically, it just reminds you of other, better shows you’d rather be watching. 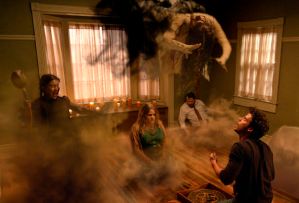 The pilot tries to distract us from all that by piling on the CGI effects, with Manfred encountering lots of ghosts, but the paranormal effects aren’t scary, or particularly believable. And in Episode 2, I noticed conspicuously less CGI — including the aforementioned, uninspiring vampire/were-tiger tussle — probably because NBC decided to cut their losses and scale things back. All we’re left with, then, is a limp procedural subplot about a local murder, flat performances and silly dialogue about “mystical, powerful energy” delivered with a straight face.

With no credible storylines to latch onto, I found my mind wandering to the unspoken real-world logistics: Is the rest of Texas really unaware there’s a town full of otherworldly creatures nearby? We see Angel Joe sprouting his majestic wings in broad daylight… no one has caught this on video yet with their iPhone? Midnight asks us to suspend our disbelief in a big, big way, but then doesn’t reward us for that with any kind of substantial storytelling payoff.