When funny people are being funny, it’s best just to get out of their way and let them do their thing.

So when Friends From College stars Cobie Smulders and Fred Savage, as well as series co-creator Nick Stoller, started cracking themselves up while chatting with TVLine at a Netflix press event, we were glad our recorder was rolling: All the better to bring you in on the jokes.

Our topic of conversation: Their upcoming comedy, which is available Friday via the streaming video service. The series, the brainchild of Harvard alumni Stoller (The Carmichael Show) and wife Francesca Delbanco, follows a group of friends who met at the Ivy League university and have stayed close in the decades since graduation. In addition to How I Met Your Mother grad Smulders and Wonder Years alum Savage, the cast includes Keegan-Michael Key (Key & Peele), Nat Faxon (Ben and Kate), Annie Parisse (Law & Order) and Billy Eichner (Difficult People).

Read on as Savage, Smulders and Stoller do their thing. 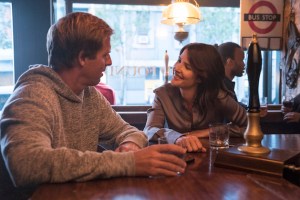 TVLINE | Do we see flashbacks to the characters’ time at Harvard at all?
STOLLER | No. Flashbacks are tough. You either have to cast people who don’t look like them, or you do weird —
SMULDERS | We could look 20 years younger. [Laughs]
SAVAGE | I was going to lose the weight.
SMULDERS | I mean, what the f–k. Just give me a new hairstyle, and I look 21 again. [Laughs]
STOLLER | Correct.
SMULDERS | What are you talking about? Right, Fred? Just give [Keegan-Michael Key] a little bit of an afro, and we’re 21 again.
SAVAGE | I look a lot like my photo when I was 21. [Laughs]

TVLINE | The first few episodes focus on a triangle that includes Keegan’s Ethan, Cobie’s Lisa and Annie’s Sam. Are other characters going to have their own episodes or their own arcs as we move through the season?
STOLLER | Yeah. Everyone has different arcs, and we start with that relationship. But the whole show is just about nostalgia, whether it’s a good thing or a bad thing. And about how when you get together with your group of friends from, old group of friends, friends from college, you regress in a lot of ways… It can be both really helpful and loving to be around those people, and also not great. 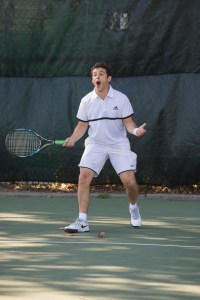 TVLINE | Fred, it seems that Max is the most stable career-wise, relationship-wise, at least at the beginning. Is that accurate?
SAVAGE | [All three laugh] I feel like —

TVLINE | You guys are giggling, it’s making me nervous.
STOLLER | We don’t want to ruin what happens. But lets just say it starts there.
SAVAGE | I think we all start there.
SMULDERS | We all start pretty great. We all start pretty solid.
SAVAGE | Then everyone’s co-dependence on each other, and the group of friends leaning on their college experiences as the best time in their life and trying to kind of keep the ripple effect of that going, you know, into their 40s and beyond, it holds people back or is detrimental to all the characters in one way or another. But, I think we all start off pretty great.
STOLLER | It gets a little bit destructive, maybe, them being around. And that seemed like a fun thing to play around with.

TVLINE | Cobie, we see a lot of the Ethan and Sam relationship from his side, but this has been going on for 20 years. Does she have any inkling?
SMULDERS | Well, just to go on with what Fred said, is that, he’s talking about 40s, but like, [my character] Sam, as we almost put in subtitles throughout every scene, Sam is actually like in her mid-30s. Like she’s a fresh —
STOLLER | She’s younger.
SMULDERS | I am much younger than everybody. I just want that to be — [She is drowned out by loud laughter from Savage and Stoller]
STOLLER | Like much younger.
SMULDERS | Like much younger. She was a freshman, and everyone else was, you know.
STOLLER | [Laughs] She was a freshman when everyone had been out of college for, like, a decade.

TVLINE | She was a prodigy!
SMULDERS | …The relationship between Lisa and Sam has always been kind of intense. Sam has never really seen her as an equal, she’s always been this young kid. So their relationship is strained from the beginning. I don’t know if she really thinks that there’s anything happening… I don’t think she has any suspicions, because again, this group is such a close group, and there is such intimacy among all of these people already, that I don’t think she perceives that as any sort of infidelity at the beginning.
SAVAGE | That’s probably a bad marketing thing. I shouldn’t say it’s about people in their 40s. It really isn’t. Let’s say late 30s. That’s hipper.
STOLLER | … We’ve always thought of it as, they like meet once a year, once every two years, hook up for like a day or two, and then go their separate ways. The whole thing is that they would never let this become a dangerous thing for their lives. And that’s what’s fun about the show, when they move to the same city, it’s like some —
SMULDERS | It’s a big deal, when we were all finally in the city together, because we have not spent this much time together since college. 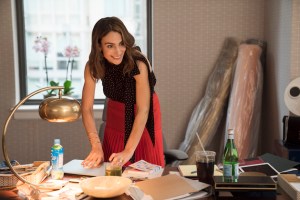 TVLINE | Sometimes, people in their 30s do things because they feel they have to, not because they want to; having babies, getting married, staying in bad marriages, that kind of thing. How prevalent is that in this group?
SAVAGE | I think you’re asking about the Harvard of it… For the characters, in some way, that is this daunting part of their past. Some people fulfill that promise, and other people, it really mocks them.. You get into Harvard, you go to Harvard, you graduate from Harvard, you’re going to conquer the world… But it could also mock you. The unfulfilled expectations of the promise of your youth, I think you really have to reconcile at a certain point.

TVLINE | College friends reuniting, sexual infidelity, good music — there’s an obvious comparison to be made to The Big Chill. Was that movie in your head when you were conceiving the series at all?
STOLLER | You know, it came up a lot. I’ve only seen that movie once, actually. A while ago. So it wasn’t something we rewatched just to — I mean, I just didn’t want it to be too present, you know. But yeah, that’s the big touchstone about college friends, so it certainly came up.