Warning: The following recap contains massive spoilers from the Fear the Walking Dead midseason finale. Proceed at your own risk.

Hold onto your scalps! Sunday’s two-part midseason finale of Fear the Walking Dead not only revealed at long last what became of Ofelia and at not-quite-so-long last Strand, it resolved — at least for the moment — the conflict between Jeremiah and Walker. Who had to bite the dust to bring about the detente? Read on…

‘DO THE LIES TURN YOUR STOMACH?’ | Early on in Episode 1, “The Unveiling,” Jake, ignoring Alicia’s (incorrect) warning that Walker’s tribe had murdered the Trembols, arrived with his girlfriend at the gas station that was the Native Americans’ HQ in hopes of settling without bloodshed the warring factions’ differences. Unfortunately, he was “about 200 years late for peace,” Walker said, dropping a bloody pig’s head for emphasis. Over lunch — because who wouldn’t want a snack after a gander at that, right? — Walker was reiterating to Jake that the less-than-jolly ranchers had to vamoose, or else, when Alicia saw, of all people, Ofelia. While the former friends caught up — and Ofelia offered a rather insufficient “sorry” for deserting everyone back at the hotel — Jake hammered out with Walker a deal for Alicia to take back to Jeremiah. Only she had a better idea: Rather than stay behind as Walker’s hostage, Jake should leave her behind and return himself to the ranch with Ofelia in tow. He did, after all, insist that they could trust Walker.

Meanwhile, back at the ranch — a phrase I can for the first time ever write and mean literally — Nick worried Madison by volunteering to join Troy in the militia. What she should have been more upset about, though, was the haircut that her son gave himself that made him look 12. (Where’s Daniel when you need him?) When Jake returned, Maddie and Nick were livid that he’d left Alicia with Walker, and Jeremiah scoffed at his son’s notion of sharing their water with the Native Americans in order to keep the peace. In fact, “I would not piss in [Walker’s] mouth if he was dying of thirst,” the old drunk insisted. That being the case, Madison decided that she needed to go rescue Alicia. Troy — for once, being reasonable and rational — suggested that they give Jake a couple of days. Nope, said his surrogate mom, adding that he owed her. They’d do it immediately. 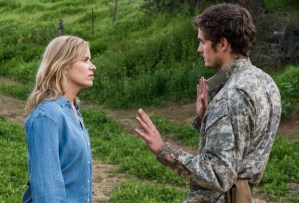 ‘YOU HATE ME… GOOD’ | While Alicia was being given a tour of Walker’s HQ, she spotted the chopper that he’d downed and, shooting daggers, told him that he’d killed a member of her family. (And right when Travis had gotten interesting, too.) “You’re just a hypocrite playing the noble Native American,” she spat. In response, he showed her a trailer full of relics — including the skull of his great grandfather, whose grave he’d had to desecrate in order to save it from the Ottos. That night, as Jeremiah was ordering Ofelia not to “complicate matters with old business” (hinting at whatever happened after their encounter in Season 2’s “Wrath”), Maddie, Nick and Troy’s mission to “rescue” an outraged Alicia went so far south, you couldn’t even see the border anymore. “Congratulations,” said Jake upon their return to the ranch. “You just declared war on Walker’s nation.”

The next day, before setting off with Ofelia and a truckload of water in hopes of appeasing Walker, Jake told his brother to “try not to kill anyone else” while he was gone, and asked Maddie how she’d convinced Troy to go along with her hare-brained scheme in the first place. (Natch, her answer was not, “It was easy — I just lied to everybody so they wouldn’t know he’d slaughtered Gretchen’s whole family.”) Alas, Walker was not impressed by Jake’s offering, and until Ofelia intervened, it looked an awful lot like he was about to get scalped. Shortly after he made it back to the ranch, Ofelia was dumped at the gate. She’d been beaten and cast out, she explained, because Walker suspected she’d given Maddie intel to help rescue Alicia. That night, one member of the militia after another became deathly ill — emphasis on the “death” part. During the ensuing chaos, Nick spotted Ofelia running away — holy crap! She’d poisoned them all! Double holy crap! Including him! 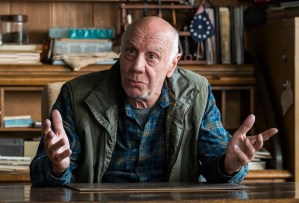 ‘ENJOY YOUR WALK’ | Episode 2, “Children of Wrath,” began with a flashback to Ofelia’s Season 2 encounter with Jeremiah. He’d given her (very little) water but refused to give her a lift and said she wouldn’t like it at his ranch, because there were “not many of [her] kind” there. Meaning? “Brown people.” As if we didn’t already know what an absolute charmer he isn’t. Eventually, Ofelia got so hot and thirsty that not even a vision of her father could save her. So she was singularly lucky that, as she neared death, Walker came along and picked her up. Back in the present, Ofelia was apprehended by Maddie but insisted she didn’t know what the powder was that, on Walker’s orders, she’d put in the coffee. Desperate to save Nick, Maddie hauled Ofelia at gunpoint back to the Native Americans’ HQ and got Walker to reveal that the poison was “anthrax, cultivated from animal hides,” so “there’s no cure.” However, since he was impressed by Maddie, he reassured her that, if Nick was strong, he’d pull though. When he did, they should leave the ranch. No can do, Maddie responded. They’d lost too much to run.

At the ranch, Jake reluctantly agreed with Maddie that, with the militia wiped out except for Troy, they should go ahead and arm everyone. He also warned Nick not to put a whole lotta faith in Jeremiah — it was a surefire way to be disappointed. Off that advice, Nick headed for the adobe that he and the old man had been repairing and dug up the “blood in the floor” — an actual skull. Whose was it? Nick asked Jeremiah. Walker’s father, the drunk admitted. When Troy and Jake had been boys, a local tribe decided that, sale be damned, the Ottos shouldn’t have their sacred land. So some “young bucks” had begun making trouble. In response, the founding fathers had killed three of them, including Walker’s uncle. When Walker’s father had inquired about his brother’s whereabouts, he’d been murdered, too. Now, Nick could either “get right with the past,” Jeremiah huffed, “or get off my land.”

‘WE’RE ON THE WRONG SIDE’ | That night, at Native-American HQ, Ofelia was telling Walker how horrified she was to find out she’d slipped all those people freaking anthrax when fires broke out around the gas station. While the tribe leapt into action, Maddie drove away with Walker’s trailer full of relics — in other words, bargaining power. The following day, Nick was showing his mom and sister the skull when Alicia realized that Madison had lied to her about the Trembols’ deaths — and Nick, too, had known. “You covered for [Gretchen’s] killer,” she yelled at her mother, going so far as to accuse her of being emotionless. “No wonder Dad was so depressed!” But Madison wasn’t about to be scolded. Her kids had no idea the burdens she carried to keep everyone together, safe, she said.

Later, Madison approached Walker with an offer: the return of his artifacts unharmed, shared resources, the Ottos keep the ranch, and everyone stays alive. She heard about his generations-old fight with the Ottos, she added, handing over the skull Nick had unearthed. “This isn’t my father,” Walker said. “This is an old white man’s shame.” Off that failed attempt at calling a truce, Madison told the others that they had till sundown the following day to amscray. That evening, she told her kids the story of a lonely little girl who grew so hardened by life with her father — in public, a beloved politician; in private, an abusive drunk — that she was able to murder him to protect her mother. And she would’ve done it again, too. She still would, to safeguard her children. Sadly, “my mama looked at me then,” she added, “like you’re looking at me now.” 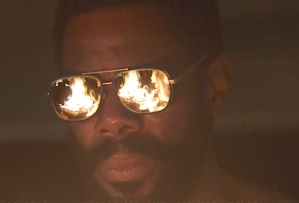 ‘IT’S GOOD TO BE HOME’ | With that confession made, Madison paid a visit to Jeremiah and revealed that she’d lied to Jake that there was no deal that could be struck with Walker. There was, in fact, one: Jeremiah simply had to die. She wasn’t going to kill him, though. She didn’t want to disappoint her kids again. She expected him to do it himself. If he didn’t, they’d lose the ranch, his sons, his legacy. This was his last chance to make up for being a s—ty father. Predictably, he refused. So it looked like Maddie was going to have to shoot him herself. Before she could, however, Nick put a bullet in his brain. Afterwards, Maddie quickly arranged a suicide tableau for the Otto boys to discover and, later, delivered the old bastard’s head to Walker. (Side note: How creepy-cool was the Ki:Theory cover of “Stand by Me” that played in the background?)

Throughout the episode, we also checked in occasionally — but not nearly enough, I suspect you’ll agree — on Strand. The good news: He just happened to find the Abigail — with some undrunk bubbly left on board, even. The bad: The vessel was dead in the water, save for the radio, on which he got to play Name That Playwright with a cosmonaut who’d been scheduled for reentry three days before the end of the world. Ultimately, Victor wound up wasting a whole lotta liquor setting the yacht on fire before taking back off on foot with all the firepower he could carry. So, what did you think of Jeremiah’s demise? Ofelia’s return? The double-header as a whole? Grade the midseason finale in the poll below, then hit the comments.