CBS’ Zoo returned with Season 3 on Thursday, picking up right where things left off, after that jarring 10-year time jump. Who’s where, and what is everyone up to? 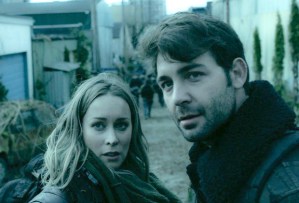 a leader of a resistance force that helps humans trapped on the “bad” side of the nation’s divider wall elude free-roaming, predatory hybrids and escape to safety. He does so in the company of girlfriend TESSA and while dazzling young’uns with the “high-tech” gizmo he uses to control regular animals — including a pride of lions that he sics on a pack of “razorback” hybrids. (Thing is, we later learn, the device is but a ruse; he of the triple-helix DNA is actually using his mind to instruct the beasts!) In the premiere’s early minutes, Jackson comes across and traps a new kind of hybrid — one that is much bigger and akin to a prehistoric rhino. Jackson sends via drone a sample of this hybrid’s blood to Abe, who is later astonished to observe that the vial’s contents have burst free and are growing into… something.

ABE and DARIELA, we knew, were living a mild-mannered life in Michigan, with their son Isaac, when CLEMENTINE showed up to suggest that Mitch is in fact alive all these years after being trapped and mauled by hybrids on Pangaea. Clementine has obtained the blueprints for a facility in Siberia where her father is apparently being kept. Abe, who has been working to reverse the effects of the gas that sterilized mankind, and Dariela are game to help out Clementine. But once Dariela solves how to infiltrate the far-away facility, Clementine pulls a gun on Abe and abruptly takes off without the pair of parents, to rendezvous with Jamie.

JAMIE, when we first see her (not as a fantasy of Mitch’s), is attending a swanky shindig dressed to the nines, where the successful author (note to self: writing pays extremely well in 2027!) chats up some sort of rival. We later realize that the odd conversation she struck up was designed to coax specific words out of the guy, so that she could assemble a spoken pass-phrase, which she later uses to access a guarded safe. Inside, she finds a hard drive with a distinct “S”/wave logo on it — but she doesn’t hold onto it for long. Instead, Logan — who’s now an NYPD detective (and her ex-boyfriend) — shows up at the jumbo jet to seize it, after pleading with Jamie to abort her search for the last Shepherd group member standing, code-named “Falcon.” When Logan later brings the confiscated hard drive to the cop shop to get checked out, it starts emitting a high-pitched whine before blowing up. 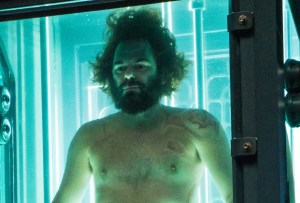 there is MITCH, who indeed survived the hybrid attack and for much of the past decade has been kept alive, submerged, in a statis chamber. A team of IADG agents infiltrate the Siberian facility and just barely extract Mitch from the chamber alive, but his faculties at first are severely impaired by his experience. That said, he is able to communicate the word “PROOF” to the agents, who then bring in someone who has been looking for him a long time — a girl who claims to be Clementine! The other Clementine — the one that multiple characters have remarked seems “different” since they last saw her eight to 10 years ago — meanwhile has met up with a skeptical Jamie, whom she has coaxed into joining the search for Mitch. This Clementine is discreetly packing a gun and receiving cryptic texts from an “Unknown” caller….

That “Unknown” person may be the mysterious, pony-tailed brunette (named ABIGAIL, this Q&A revealed), who very likely is the “Falcon” Jamie is chasing. We first see her sneaking into the small fortress that Jackson & Co. use as a base, where she arrives outside the new hybrid’s cage with a hard drive just like the one that blew up the NYPD precinct. Jackson and Tessa spy her leaving, assuming she’s an approved IADG investigator, but appear caught off by guard when laying eyes on her, before she drives away — just as an explosion showers rubble and debris on everyone.

What did you think of Zoo‘s Season 3 opener?