Warning: This post contains spoilers for the series premiere of GLOW. Proceed with caution.

By now, there’s a good chance you’ve watched the first episode of Netflix’s female wrestling comedy GLOW. So can we talk about that fight at the end?

No, not the stunt choreography. And not the dramatic ramifications of Debbie learning about Ruth’s affair with her husband. (Though both of those are, to use GLOW-era vernacular, rad.) Instead, we want to discuss the preternatural calm that baby Randy exhibited while his mom stormed into the boxing gym and prepared to destroy her former friend in the ring.

Such poise! Such emotion! Such a lack of drool! We were so captivated, of course we had to ask on-screen mom Betty Gilpin, as well as co-stars Alison Brie and Marc Maron, about the scene when we caught up with them at a press event prior to the premiere. Read on for their take on their smallest co-stars’ Emmy-worthy performances.

TVLINE | One thing struck me when you’re carrying the baby in and you’re screaming at Alison’s character, did you have to swap that baby out? Did the baby start crying because you were yelling?
BRIE | No, the babies are incredible.
GILPIN | The babies are amazing. 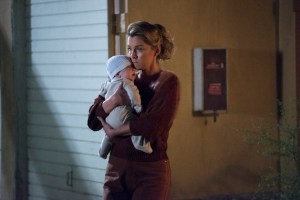 TVLINE | Can they hear OK? Because you guys were screaming, and they didn’t seem to pick up on any stress.
BRIE | I did ask that!
MARON | They just kept looking amazed. Never cried.
BRIE | They were so entertained by Betty’s performance.
MARON | The funniest babies.
GILPIN | Liam and Charlie, they’re twins. They are, present company excluded, some of the best scene partners I’ve worked with.
BRIE | I hear that.
GILPIN | You look into their eyes and… At first I was like, “Oh, that sucks. I have to be the person with a kid. They’re going to be annoying.” [But] their eyes are like [they’re] 6,000 years old, [with] the history of the whole world, and [the babies] reflect back whatever you’re giving them. It is crazy.

TVLINE | That’s amazing.
GILPIN | There’s one scene in… whatever the diner scene is.
BRIE | Oh yeah, with your mom and dad.
GILPIN | Yeah. Charlie was giving the performance of the whole season. Looking at you, recognizing you, and then he gave me a look back. It was devastating. Giving you options.
BRIE | Yes.
GILPIN | Amazing.