Nothing about GLOW, Netflix’s fictional comedy about the real Gorgeous Ladies of Wrestling, should work. A group of women, most of whom who have never wrestled or acted before, team up with a sketchy director to create a ladies’ wrestling TV show that’s remembered as ’80s kitsch at best? On paper, it seems like the series equivalent of slap bracelets or Garbage Pail Kids: silly fun that’s easily forgotten.

But with a production team that includes Orange Is the New Black‘s Jenji Kohan and a cast that includes Community‘s Alison Brie, Nurse Jackie‘s Betty Gilpin and Maron‘s Marc Maron, the half-hour series — which premiered on the streaming video service Friday — is a rollicking, funny ensemble effort that feels like a lighter, flightier OITNB.

In a moment, we’ll want to hear what you thought of the premiere episode. But first, a quick recap:

Neurotic, out-of-work actress Ruth is broke and sad: She can’t book a job anywhere in 1980s Los Angeles, and she’s having an affair with a married man (played by Brie’s Mad Men co-star Rich Sommer). So when she hears about an open casting call for an undefined project, she goes… and finds herself at a shabby boxing gym, surrounded by a bunch of amateurs. 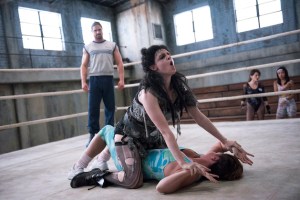 Soon, the project’s director steps forward: His name is Sam, he’s helmed some seriously bad B-movies, and he is looking to put together a female version of the World Wrestling Federation television show. Ruth’s fellow hopefuls/competition include a stuntwoman, a woman who styles her clothing/hair/behavior like she’s a wolf, a pair of hairdressers and a music-video babe. And when Ruth tries to Serious Actress her way through a backflip move — she demands backstory — she sees even this feeble prospect dry up before her eyes: Sam tells her she’s done.

No wait, it gets worse for the plucky protagonist: She’s mugged by some kids, forcing her to beg a ride from her friend Debbie (Gilpin), a new mom and former soap actress. And when Debbie shows up, it becomes clear that Ruth’s married man is Debbie’s husband (!).

Undaunted by getting asked to leave, Ruth goes home and works on a character, then returns to the gym the next day to try to impress Sam with her creativity and commitment. Too bad that Debbie, who has learned about her husband’s infidelity, picks that exact moment to show up and get into a full-on brawl in the ring with her former pal. And as the two women rip at each other’s hair and pin each other to the ground (well, Debbie does most of the pinning), Sam’s eyes light up: He imagines what his series could be, and it’s a thing of neon-lit glory.

OK, your turn. Grade the premiere episode via the poll below, then hit the comments to elaborate!