But GLOW also provided a vital lesson to its cast, courtesy of the hands-on training the actors underwent prior to the shoot.

“One of the first things we learned in the wrestling ring was: If you don’t tuck, you’re f–ked,” star Betty Gilpin tells TVLine.

She’s referring to the need for wrestlers to curl in on themselves “when you flip over, or do any move,” she elaborates.

Brie pipes up. “I was like, ‘What happens if you… Oh, you break your neck.”

Ouch! The actresses, plus Maron, gave TVLine some against-the-ropes scoop on what to expect from GLOW‘s 10-episode first season, which premieres Friday. Read on for their pile-driver of a preview.

IN THIS CORNER… | Brie plays Ruth, an out-of-work actress who attends an open casting call without realizing that the audition is for a B-movie director’s low-budget, all-female take on the wildly popular World Wrestling Federation. Maron plays the director, whose name is Sam. Gilpin plays Debbie, a former soaps actress and new mom who’s a good friend of Ruth’s. Chris Lowell (Veronica Mars) also stars.

MORE ABOUT THAT TRAINING | The cast took part in more than a month of wrestling practice before shooting, and lessons continued as the episodes went into the can. “What we all quickly learned was, you have to be fearless,” Brie says. “You have to commit 100 percent. If you go halfway, that’s when you get hurt.”

PRACTICE PAYS OFF | “When we were shooting the show, it was so important to us to be able to do every move,” she continues. “I would say that Betty and I were capable of doing all but two moves that you see our characters do in the course of the whole season, but our stunt doubles would tag in.”

BARK VS. BITE | Maron says not to be fooled by his character’s gruff, sarcastic exterior — especially when it comes to his relationship with Brie’s Ruth. “He’s bitter, broken-hearted and cynical, but still delusional and has a certain grandiosity to him,” he explains. “But I do think he’s ultimately fragile.” 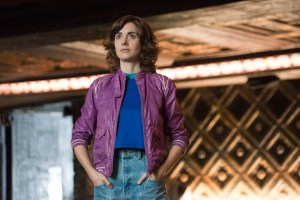 STICK TO THE SCRIPT | Brie, Gilpin and Maron all quickly dismissed a question about improvisation during filming. “This is not your typical comedy, and there was so much nuance in the writing already, that that’s exactly what we didn’t want to lose,” Gilpin notes. “Also, with so many characters, it just would be too loud.”

YOU’VE GOT THE LOOK | GLOW recruited Mad Men hair and makeup gurus Lana Grossman and Theraesa Rivers, as well as costume designerBeth Morgan (The Last Man on Earth, The Carmichael Show) to bring the ’80s back to vivid, neon life. “It was just absolutely ridiculous what I had to wear” — think: thong leotards and feathered hair — “but so much fun,” Gilpin says. “I was pretty hung up on aviator-style glasses,” Maron adds. “That really needed to happen for me.” And Brie, who wanted to look “totally different on this show than I had ever looked before,” went full-on Ripley. “I brought in a photo of Sigourney Weaver from Alien, the first one, from 1979, and I was like, ‘I think we should cut my hair into a shag and perm it,” she says, laughing. “And that’s exactly what we did.”