American Gods rounded out its freshman season on Sunday with a finale that definitely answered one of the fantasy series’ biggest questions: Who, or what exactly, is Mr. Wednesday? Though many viewers (especially those who’ve read the Neil Gaiman novel on which the series is based) figured it out a while back, it took poor Shadow Moon eight episodes to finally wrap his mind around the truth.

“I am Odin,” the enigmatic older man told his bodyguard, copping to his true identity as the deity at the head of Norse mythology, aka the god of war.

The revelation came at the end of an episode that saw the official start of the battle between the Old Gods and the New, as well as: 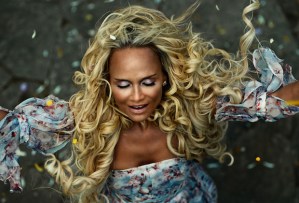 * The introduction of Easter, the goddess of the harvest and all things fertile, whom Wednesday rallied to his cause with promises of being worshipped again (rather than just tagging along on a Christian holiday)

* Laura’s learning that Mad Sweeney, working on Wednesday’s orders, caused the car crash that killed her

* Easter’s assurance that Laura couldn’t be resurrected, because she’d been killed by a god

* Bilquis’ backstory, which goes like this: She’d once had temples of undulating naked lovers worshipping her/sacrificing themselves for her, but by 2013, she was homeless and living on the street. That’s where Technical Boy found her, handing her a cell phone loaded with a dating app that would help her more easily find people for her to, um, take to church. So she flourishes, but when TB finds her in present day, he demands that she pay back the favor. Next thing we know, she’s having lethal sex in the bathroom of a bus headed for a Wisconsin attraction called House on the Rock.

Naturally, we had questions. So we asked showrunners Bryan Fuller and Michael Green to give us some insight into the season-ender, starting with the show’s hoppiest cast members.

TVLINE | I have a question about bunnies.
GREEN | [Laughs] No one’s asked us about the bunnies yet… If you’re upset about bunnies, we have a way to make you un-upset about that in Season 2, hopefully.

TVLINE | I wasn’t upset about bunnies at all. I was thinking back to Episode 7, and how a bunny was what hopped into the road and caused Laura to swerve and crash the truck, and how it seems that things are even more connected than we thought. Or am I reading too much into that?
GREEN | No, that is a deliberate bunny.
FULLER | There were actually more instances of bunnies that had to be dropped because we were over budget in [visual effects]. You were going to see a lot more bunnies running through people’s stories, including Bilquis’. Everytime you see a bunny, that is a spy for Easter.
GREEN | Similarly, there are a lot of cats in Season 1. In Season 2, you might find that all cats share a common character.

TVLINE | The huge revelation scene at the end, when Shadow realizes that Wednesday is a god: How close is the finished product to your original vision for that pivotal moment?
GREEN | Ha!
FULLER | That’s our answer.
GREEN | A lot of the way things finished in this episode were discovered in post, with intention meeting reality meeting capability and meeting imagination. That’s an abstruse way of saying we had a number of visions for it and we are thrilled with the way it turned out, but they are not identical twins.

TVLINE | We spoke earlier this season about how you originally had Shadow figuring out that Wednesday was a god in Episode 4. And that’s something that our readers have pointed out: Why does it take so long for Shadow to catch what’s going on, given all the weird stuff that’s happening? What’s your response to that?
FULLER | [Shadow] has bought into the fact that this is not the world that he experienced before going to prison. And now that he’s been released from prison, the world is upside down. There’s a fun metaphor there for what it’s like to acclimate to reality when you’ve been in a confined space, but reality is pushing back in this regard. For Shadow, there was an element of realization early on in the season, and so we had to do a lot of mid-stream repurposing and removing of certain scenes and certain lines of dialogue that was on the original path of Shadow realizing gods were in play much earlier. What we did was double down on “this is a weird world that he’s into” and the reveal actually being that it is gods. Because the world can go weird in a wide variety of ways, and the specificity of this weird being god-related and faith-related, and that he has been vocabulary building for the last eight episodes, felt like it was a way to knock Shadow out of his numbness. 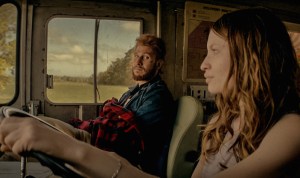 GREEN | There was a fun moment of discovery for us in the previous episode, when Laura and Mad Sweeney first pair off. In that episode, she basically says to Mad Sweeney, “What the f–k are you? What the f–k is all this?” and demands and answer and gets it right away. It’s the same episode where Shadow is unable to ask a question, and it speaks to who they are as characters in a really fundamental way. It takes Shadow a longer time to be able to come around to receive these answers. Personally, I think he doesn’t ask it because he can’t hear it until he gets to that point. Whereas Laura, being a very, very different creature, demands the answer and then gets it.

TVLINE | We meet Easter in this episode. In the book, she plays a crucial role in Shadow’s story later on. What can you tell me about that relationship as we move forward?
FULLER | There’s an interesting triangle of sorts with Shadow, Easter and Wednesday that will be fun to explore. Easter, as a gateway — really, Christ and Easter as the gateway for Shadow understanding we’re really talking about gods as opposed to just general voodoo, which is another god we’ll be getting into. [Laughs]
GREEN | We love Kristin Chenoweth and we want more of her in the show. We demand more of her in the show.

TVLINE | Bilquis is shown to be in the New Gods’ debt, but she’s not necessarily the most willing soldier in that war.
GREEN | In an act of desperation, she accepted what seemed like an acceptable compromise, which is a far less extreme compromise than was offered and accepted by Vulcan, offered and rejected by Wednesday. It’s a much simpler thing: You just take a phone and say, “Yes.” She was also in much more dire straits. Now that she’s more herself again and she weighs the rewards of the New World against what was lost in the Old, she may come to regret that decision. But she is, at the moment, obliged.
FULLER | She has a very complicated relationship with the New Gods. Now, on her way to the big meeting of the gods at House on the Rock, she’s going. But whose side is she on is the bigger question. You got just barely a taste of Bilquis in the first season, and she’s going to be a major player in Season 2.

What did you think of American Gods‘ season finale? Grade the episode via the poll below, then expand upon your thoughts in the comments!