Heads (teehee) up: This article contains major spoilers from the Reign series finale. Consider yourself warned.

Friday’s Reign series finale reunited Mary Queen of Scots with her first husband — albeit in a “we’re in heaven together now” sort of way — but what of her other first love, the man who nearly stopped her from marrying Francis in the first place? 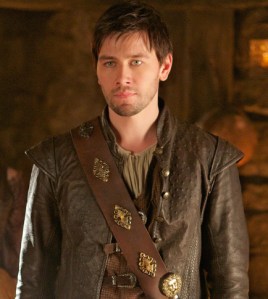 “If you were a careful viewer, rather than a hopeful Bash lover, it was pretty clear that he had met an end,” executive producer Laurie McCarthy told TVLine when asked how Bash has fared since his departure. “Rizzio had kind of been touched by [Bash’s] spirit. I don’t know how he went, but he did not survive.”

That’s right, Torrance Coombs‘ character — who left to take up the life of a druid in the third season finale — is off enjoying his own version of Francis and Mary’s heaven-in-bed, perhaps with Kenna. (Remember Kenna? She was great.)

So much for Bash promising Mary, “I will come to you when you need me the most. Of this, I am sure.” At least we can take solace in knowing that Coombs is still very much alive on ABC’s Still Star-Crossed. ¯\_(ツ)_/¯

Reign fans, are you surprised to hear that Bash is no more? Grade the finale below, then drop a comment with your thoughts.