Moe’s head-in-the-sand idiocy hit a new low on this week’s Fargo… while Nikki got a taste of sweet revenge.

Gloria should be celebrating, with Emmit throwing himself at her feet and confessing to killing Ray — and also to tricking him into taking the Corvette instead of the stamps when their dad died. Emmit tells her how guilty he feels for how he’s treated his brother over the years, and Gloria leaves the interrogation room feeling vindicated. “Heck, I think I might finally put this thing to bed,” she tells her son Nathan over burgers.

But not so fast there: Meemo is out there murdering more guys with the last name Stussy, making it look like the killer is still at large. Moe gets called to a crime scene where a George Stussy is found duct-taped to a chair, just like Ennis was — and blockhead that he is, Moe falls for the misdirection. (“This guy must really hate Stussys,” he mutters.) The cops haul in an unidentified Asian guy, who confesses to all of the murders, including Ray and Ennis. Moe, flush with victory, orders Gloria to let Emmit go. Case closed, everybody!

Gloria’s spirit is crushed: She informs Emmit he’s free to go, guessing that someone paid off the Asian guy to be the fall guy. Before Emmit leaves, though, she does ask him about “the master pulling the strings,” aka Varga. Emmit’s a terrible liar: He stutters and hesitates, and can’t say anything to her… except “I’m sorry.” Then he walks out of the police station to join Varga in a waiting car, trudging through the Minnesota cold like a man on death row. 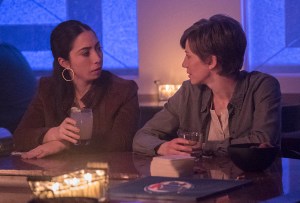 Afterwards, Gloria sulks over a drink with Winnie: “It’s over. The good guys lost.” She tells Winnie about the robot in Ennis’ sci-fi novel — the one who says, “I can help!” but really can’t — and how she can’t even get automatic sensors to notice her. Sometimes she feels like she doesn’t even exist, she says. But Winnie pokes her in the arm to confirm she’s real, then gives her a warm, comforting hug. (Aw! Cop friends!) Gloria is touched, and goes to the bathroom… where the automatic faucet finally responds to her! Hmmm, maybe this case isn’t closed yet after all?

A WRENCH IN YOUR PLANS | Varga might be a “master pulling the strings”… but the master didn’t account for a woman scorned. Meemo’s driving the truck with Varga’s mini living quarters in the back when he’s ambushed by Nikki and Mr. Wrench, who scare Meemo off with a fake grenade and drive away with the truck, nabbing Varga’s laptop from the back. Nikki calls Varga and taunts him by reading off his bank account numbers, demanding he bring a cool $2 million in cash to the lobby of a hotel the next day if he wants to keep his secrets safe. 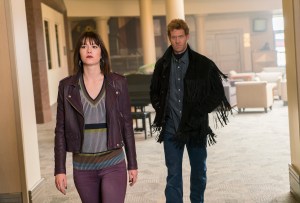 Varga arrives in the hotel lobby clutching a metal briefcase, and tries to get Nikki to drink some of his “mother’s tea,” but she wisely declines. He even offers her a job, but she says no to that, too: “I’ve already got a job: blackmailing you.” She predicts there’s nothing but dirty undies in that briefcase, and that Meemo has a rifle aimed at her right now. (Which he does.) And Varga’s even stocked the lobby with similar-looking guys in trenchcoats, so he can’t be identified. But Nikki outsmarted him: Meemo feels Mr. Wrench placing a gun to his head and stands down. And she’s itching for revenge, telling Varga: “I want to look you in the face, and rip out something you love.” She gives him till the next day to bring her the money.

But he must not have paid up, because the episode ends with Hamish Linklater’s IRS investigator finding a fat envelope full of Stussy Lots documents waiting for him, along with a flash drive. You clearly messed with the wrong ex-con, Varga.

* Gloria also had a puzzling chat with the Widow Goldfarb, who was reluctant to share any personal information about herself and kept mixing up when, exactly, Emmit arrived for dinner, chalking it up to the hazy mists of memory. Why is Goldfarb covering for Emmit? Does she know a murder charge might threaten her purchase of Stussy Lots?

* Yet another Big Lebowski reference this week, with Nikki’s allusion to Varga stuffing his briefcase with dirty underwear instead of cash matching Walter’s “ringer” case from the botched Bunny Lebowski handoff:

* A gory, gorgeous shot in the opening scene, when Meemo stabbed poor Marvin Stussy in his kitchen, with Marvin’s red blood running together with the white milk he spilled.

* No Yuri Gurka this week. Did Ray Wise send him to hell last week, with generations of black-and-white peasants haunting him for eternity?

* I took notice of Varga and Meemo’s operational code, mentioning a “Stage 4” and a “Stage 5.” I would ask if there’s a Stage 6… but knowing Varga, there’s probably a Stage 206.