This week’s Fargo was a double bill of sorts: a prison-break action movie, followed by a psychological thriller about a man’s guilty conscience. 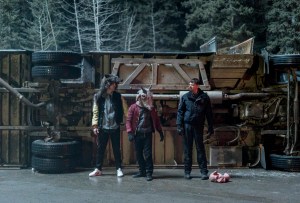 We pick up where we left off, with Nikki knocked out cold in the prison bus and Yuri working fast to get his hands on her. But before he can, Mr. Wrench wakes up! While Yuri and his accomplices slaughter the guards in front, Wrench and Nikki struggle with the chain that’s cuffed them together. They free themselves just in time, and Wrench pummels an accomplice in a pig mask before he and Nikki escape into the icy forest, still chained to each other. Nikki tries to talk to Wrench, before discovering he’s deaf. Just her luck!

The two of them set off on a mini version of The Revenant, trying to survive the frigid cold while evading Yuri and his fellow marauders. Nikki’s exhausted, and haunted by Ray’s death with every step. She and Wrench finally find an ax resting on a stump, but before Wrench can hack their chain apart, arrows start whizzing at them. Both Wrench and Nikki are hit, but Wrench manages to use their chain to trip up Pig Guy, and he and Nikki choke Pig Guy with the chain, eventually (ick) severing his head. Wrench also hurls the ax at whoever’s shooting the arrows, and we hear it hit someone. (Hell of a throw!) Wrench rips the chain apart — they’re free!

Nikki and Wrench stumble into a bowling alley… which leads to maybe the strangest TV scene I’ve seen this year. Nikki orders two double whiskeys at the bar, and is joined by — Ray Wise! (Remember, he was Paul, the kindly stranger Gloria chatted with in Los Angeles.) Paul tells Nikki the Biblical story of Job, introduces her to an adorable kitten who might be the reincarnation of Ray (??) and implies she’s in some kind of purgatory: “We all end up here eventually.” (Did I accidentally switch the channel to Twin Peaks at some point?) He sends Nikki off with the keys to a green VW Beetle to make her escape — she can’t keep the kitten, though. 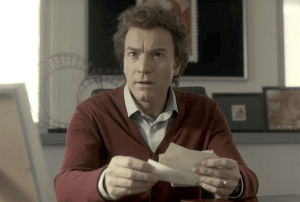 Then we shift gears and check in on Emmit, who’s still wracked with guilt over his brother Ray’s unfortunate demise. That guilt only gets compounded when Sy comes over to visit and is intercepted by that snake Varga, who forces a cup of his mother’s special tea on him. There’s something funny about that tea, because Sy vomits in the Stussy lobby and passes out, falling into a three-month (!) coma. Emmit dutifully sits by his right-hand man’s bedside, but he’s dogged by questions from Gloria and Winnie. Oh, and someone parked Ray’s beat-up Corvette in his parking space. Is someone messing with him?

If they are, it’s working: They’ve also redecorated Emmit’s office, replacing all his photos with copies of that damn stamp Ray wanted so badly. A clearly spooked Emmit screams at his receptionist and pulls the shades on his glass-walled office, slipping further and further in paranoia. He wakes up drunk in his home and takes a leak, only to discover… he has a mustache! Someone must’ve snuck in and planted the fake ‘stache on him to remind him of Ray. He’s convinced Ray’s still alive, and this is his and Nikki’s doing, but Varga tells him if Nikki’s alive, she’s likely escaped to Canada somewhere. (And that’s a big “if.”)

Varga tries to get Emmit to focus on business matters, even offering him a “mild sedative” — careful with that, Emmit — but the Stussy boy can’t be calmed down. He feigns sleeping to throw Varga and Meemo off the scent, then marches into Gloria’s police station and announces: “My name is Emmit Stussy. I want to confess.” Better grab a pen, Gloria.

* Farewell, DJ Qualls. We hardly knew ye. Did he even get a line of dialogue before losing his head?

* The scene between Nikki and Ray Wise in the bowling alley is lifted directly from The Big Lebowski: the slow zoom-out to reveal a man beside him, the dream-like philosophical discussion… Nikki didn’t order a white Russian, though.

* A bloodied Yuri had his own run-in with Wise at the bowling alley, where Wise delivered a stern message from “Helga Albracht and the Rabbi Nachman.” (Albracht is the murder victim from the premiere’s German prologue.) Then Yuri saw a vision of a crowd of peasants staring back at him in black-and-white. Is he headed to hell for what he did to those peasants?

* Gloria also signed the divorce papers sent by her gay husband Ron, after a lot of hesitation. But she doesn’t have much time to date, anyway.

* Here’s hoping Kitten Ray gets that bowl of beer to lap up during the next Gophers game.