The reverberations from last week’s Fargo fatality spread far and wide this week — and gave us our first tangible connection to previous seasons.

Nikki’s still waiting in that motel room, nursing her bruises with ice, unaware that Ray’s lying dead in a pool of blood. The cops knock down her door and haul her into the station, where Moe coldly drops a photo of Ray’s corpse in front on her. She’s stunned, but maintains her poker face (or maybe her bridge face?) while Moe advises her to turn on the waterworks and say Ray was beating her up if she wants to minimize her sentence. Gloria wants to interview Nikki herself, but Moe is still waving off her conspiracy theories, and her crime-solving partner Winnie gets reassigned back to traffic by her chief from St. Cloud. 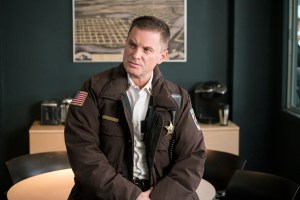 Gloria’s still technically chief for eight more days (including Christmas), so she tries to go over Moe’s head and talk to Nikki anyway. She gets stuck in bureaucratic hell, though — she needs a yellow form in order to get a blue form — while Nikki’s a sitting duck in her holding cell. A cop played by DJ Qualls comes in and cuffs Nikki so he can sweep her cell for contraband… but then he pulls out a syringe! Luckily, before he can stick her, Gloria rushes in, gun drawn. The fake cop drops the syringe, but he kicks Gloria’s gun away and runs off. Then more cops run in to restrain… Gloria, of course.

She tries to tell them about the fake cop, but Moe thinks the syringe could just as easily be Nikki’s. And when they review the security-cam footage, it conveniently glitches out just before the fake cop enters. Still, Gloria finally convinces Moe to let her talk to Nikki, who remains tight-lipped; “follow the money” is all she’ll tell Gloria. Fed up, Moe revokes Nikki’s parole and sends her to the state penitentiary. But when Gloria offers to bring her some pie after the holidays so they can talk more about Ray, Nikki softens, requesting “coconut cream pie… with chocolate flakes on top.”

On the bus to the state pen, Nikki is seated next to a familiar face: Mr. Wrench, the deaf hitman from Season 1! (This season takes place four years after Season 1, so he must’ve been thrown in jail at some point.) They don’t have long to get acquainted, though: A man walks into the road, forcing the bus to veer off and crash, flipping over a few times. Nikki is knocked out cold… and we see Varga’s deadly henchman Yuri Gurka enter the bus and work on opening the door to the rear cage where she lies unconscious — and helpless. 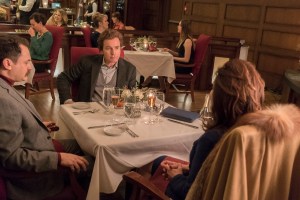 O BROTHER, WHERE ART THOU? | Emmit isn’t handling Ray’s death — and his hand in it — much better. He meets Sy and the Widow Goldfarb at the steakhouse, nervously ordering a stiff drink and bemoaning the state of his marriage: “She left last week. Sex tape.” (Goldfarb notices a spot of blood on his shirt, too.) To make matters worse, Winnie shows up to question Emmit about his brother’s death. Before she can even say anything, Emmit blurts out, “I’ve been here since 6!” He points the finger at Nikki, labeling her a “black widow,” before Winnie even says how he died. Sy hustles him out of the restaurant… but Winnie sticks around to ask Goldfarb a few questions.

Back in Sy’s Hummer, Sy offers to make the final arrangements for Ray, but Emmit turns on him (“What’s your angle here?”), accusing him of teaming up with Ray against him. Sy says that’s crazy, and reassures Emmit he’s the only person he can trust. He urges Emmit to sell to Goldfarb so they can wash their hands of Varga once and for all. But when Emmit goes back inside his house, Sy looks up and sees Varga in an upstairs window, looming over him menacingly.

* Yuri also paid a visit to the police station/library, where he had a chilling standoff with a clearly outmatched Donny. He used a Jedi mind trick — and Donny’s paralyzing fear — to convince the cop he was never there: “You think you see me, but your eyes are lying.” Donny left with his tail between his legs… and Yuri left with Emmit’s police file.

* Did Mr. Wrench die in that prison bus crash? Or could he be the one to save Nikki from the clutches of Yuri Gurka?

* Nikki trying to climb out the motel’s bathroom window and getting yanked back kicking and screaming by police is straight from the Fargo film, where William H. Macy’s crooked car salesman Jerry Lundegaard met the same sad fate.

* Loved the opening scene of Varga using a pocketknife to slice open all of the Stussy family gifts on Christmas Eve. He’s a real-life Grinch!

* Couldn’t help but feel bad for Sy when he sobbed on his wife’s shoulder after she asked him what’s wrong: “The world. The world is wrong. It looks like my world… but everything’s different.”

* Did Nikki notice something in that photo of Ray’s dead body that told her who killed him? Maybe a fragment of the shattered frame that held the vaunted stamp?