Season 3 of Fargo has been sitting on simmer for a few weeks now, but it heated up to a full boil this week — and ah jeez, a main character wound up dead.

Ray is still fuming after Nikki’s savage beating at the hands of Yuri and Meemo. He grabs his gun, and they tail the two henchmen to an empty lot, where they spot V.M. Varga being ushered into a car. Nikki theorizes he’s the “head honcho,” and Ray’s ready to go after them, guns blazing. But Nikki cautions him to wait. She thinks Emmit’s caught up in some “shady dealings” with these guys, and she wants to lay low and see how this unfolds before they make their move: “First, we gotta know the play.”

A still-shaken Sy is further rocked when Varga informs him of a plan to secure $50 million in loans to aggressively expand Emmit’s company. Sy’s worried about taking on that much debt, but Varga insists they need to think big: “The shallow end of the pool is where the turds float.” And Emmit’s fully onboard, too. Sy’s also worried about the IRS investigator, but Varga’s already dispatched Meemo in a tidy suit to tell the IRS guy they’re filing an official protest that requires him to vacate the premises immediately. Varga scoffs at Sy’s lack of imagination: “I’m beginning to think that finance is more of a hobby for you.” 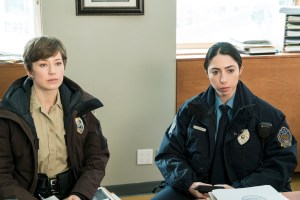 But Varga’s evil masterplan does have one nagging flaw: the dogged police work of Gloria and Winnie, who show up at Emmit’s office to inquire about Ray. Varga tries to take over the questioning for Emmit — even though he refuses to give Gloria his name. But Gloria won’t be deterred; she peppers Emmit with questions about his feud with his brother. As she lays out her case, it dawns on Emmit that Ray was trying to rob him. But Varga swats away any connection between Emmit and Ennis Stussy, noting how many Hitlers there were back in 1932 Germany. He shoos the cops out the door, and when Gloria tries to leave her business card with Emmit, Varga snatches it out of her hand.

Varga sends Yuri to the Eden Valley police station to look at their files on Ennis… and sends Meemo to “execute” Ray and Nikki. Those two, sensing the heat is on after Gloria and Winnie knock on Ray’s door, pack up and flee to a roadside motel — with Meemo following discreetly behind. Ray gets a hobbled Nikki set up in the motel room, gingerly helping her into bed. She sends him out for more aspirin, but he realizes he left their bag of cash from that bank-imposter scam back at his place. Oof… that’s gonna turn out to be a big mistake, isn’t it? 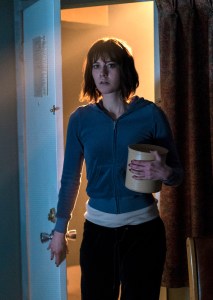 It does indeed, because when Ray gets back home, his brother Emmit is waiting for him. (He has a key, since he co-signed the mortgage.) Emmit offers his unconditional surrender, and just wants to mend fences with his brother. In fact, he’s brought a peace offering: the infamous stamp, which he hands to Ray in a frame. Ray isn’t ready to forgive, though, and doesn’t accept the gift, and the two brothers wrestle over the framed stamp… until the glass frame accidentally shatters over Ray’s head. A huge shard lands right in his throat, and when Ray yanks it out, blood starts gushing like crazy. Uh-oh.

He collapses to the floor, dead, and a panicked Emmit calls Varga to clean up the mess. Once he arrives, Varga orders Emmit to go to the dinner meeting he had planned with Sy, like nothing’s happened. He’s come up with an alternate theory, too: “Your brother was killed by his ex-convict girlfriend.” He says Ray was beating Nikki — hence, the bruises — and she finally fought back. He instructs Emmit to “be vague,” but Emmit’s still devastated about what happened. “I didn’t mean to,” he weeps. “No one ever does,” Varga replies.

Back at the motel, Nikki goes out for ice… and Meemo waits in her room’s shower to pounce. But by the time she gets back, he’s gone, called away by Varga to help with the Ray cleanup. (That’s one fortunate upside to this mess, at least.) And Gloria, deep in thought about the case while driving, says “Screw it” and makes an abrupt U-turn, radioing in to have Winnie meet her at Ray’s place. But what kind of scene will they walk into when they get there?

* After a few overlong episodes, this week’s clocked in at a lean and trim 1 hour, 4 minutes… and, maybe not coincidentally, was one of the best, most tense episodes of the season.

* So Sy never bothered to mention to Emmit that Yuri and Meemo beat the hell out of Nikki? Or does he think that Emmit ordered that hit himself?

* A nice little moment when Varga addressed Gloria as “detective,” and she corrected him: “Chief.” Oh, now she’s the chief!

* Yet another Big Lebowski nod this week, this time from Varga as he rambled on about Lenin’s thoughts on Beethoven, referring to Lenin as “Vladimir Ilyich Ulyanov… not the bloody Walrus.” That Lenin/Lennon clarification is straight from Walter’s angry bowling-alley rant to the clueless Donny. (Shut the f—k up, Donny.)

* Of course V.M. Varga lives and sleeps in the vacant trailer of a shipping truck, like a caged animal. It makes a strange amount of sense, doesn’t it?

* Varga tried to dig up dirt on Gloria Burgle via Facebook and Google, but he couldn’t find any trace of her on either. Hey, her Luddite tendencies are paying off!