You’d think every Fargo character would know that rule pretty well by now, but someone had to learn it the hard way this week.

Ray’s out of a job, and he and Nikki lost their high-roller bridge sponsor when Ray blew off their dinner, so they’re forced to come up with another get-rich scheme — and yes, it involves more wigs. Ray poses as Emmit again and films a sex tape with Nikki (who’s wearing a long red “hooker wig”), placing it in an envelope on Emmit’s doorstep with a ransom note reading, “Pay Us $100,000 Or We’ll Show Your Wife.” Only Emmit’s wife Stella can’t resist opening the envelope, and she runs out of the family home in tears, taking the kids with her, before Emmit can explain.

Emmit is crushed, and rants to Sy about his brother’s treachery, telling his right-hand man: “You’ve gotta fix this… whatever it takes.” A gleeful Sy calls Nikki and tells her she’s “the stupidest person alive” for putting the DVD in the envelope; now that Stella’s seen it, they’ve lost all their leverage. Nikki won’t budge, though, and now demands $200,000 to tell Stella the truth about the tape. (Sy: “It never happened!” Nikki: “That doesn’t make it any less of a fact.”) They agree to meet later that day to hash things out. Uh-oh.

Nikki drives out to an abandoned Stussy parking lot (no!) to meet Sy, and they drive way into the back (no!) so no one can see them. He offers her 40 grand; she holds firm at 200, and wants the stamp, too. But their negotiation is interrupted by V.M.’s henchmen Yuri and Meemo, who’ve been following Sy all day. Yuri tells a menacing story about how Siberia is just like Minnesota, except there, the soil is soaked with blood… and then Meemo grabs Nikki by the hair. He and Yuri ruthlessly beat her to a pulp while Sy looks on in horror, before the two thugs calmly drive off. Nikki is left alive, but barely; she struggles to crawl back inside her car and drive home.

There, Ray finds her huddled in the bathtub, her torso covered in ghastly bruises. And she thinks those guys work for Sy… and Emmit. This brotherly feud is about to get a lot uglier, I’m thinking.

Elsewhere in “The House of Special Purpose”: 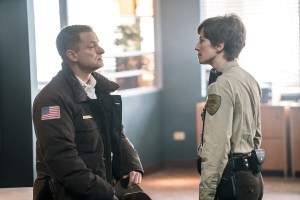 MOE PROBLEMS | Gloria’s investigation into Ennis’ murder is really cooking with gas, now that Winnie’s connected all the Stussy-brother dots. They haul Ray down to the station, where Gloria peppers him with questions about his Corvette’s run-in with Sy’s Hummer. Ray just laughs it off as a “family matter,” though, and Gloria’s boss Moe not-so-subtly suggests she drop it. Her working theory about the murder is pretty close to the truth, but Moe dismisses it as mere coincidence: “You can’t prove it.” Hopefully, he’ll end up apologizing like Bob Odenkirk’s character did to Molly Solverson in Season 1.

Meanwhile, that snake V.M. Varga just continues to slink his way through Emmit’s company, asserting his dominance over Sy by urinating in his “World’s Greatest Dad” mug and making Sy drink it. He also starts planting seeds of doubt in Emmit’s head about Sy’s loyalty. (Well, he’s pretty blunt about it, actually: “I’m not sure we can trust the Jew.”) But Emmit starts listening to him when an IRS investigator shows up and starts poking into Emmit’s business dealings. V.M. suggests they show him fake books and use the guy’s family against him: “Does he have kids? They can be used.” Don’t go to the dark side, Emmit! 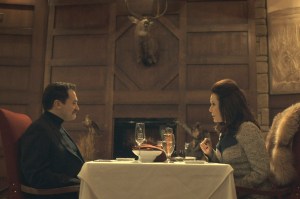 * Mary McDonnell made her debut as “the widow Goldfarb,” a millionaire who sat down with Sy at a swanky steakhouse and announced her intentions to purchase Emmit’s parking-lot company. (Hey, all yours, lady!) She did warn him, though, that if they can’t make a deal, she’ll have to become a competitor instead: “You don’t want a Goldfarb for an enemy.”

* Sy and Nikki’s parking-lot showdown, of course, recalls the ill-fated standoff in the original Fargo film between crook Carl Showalter and rich granddad Wade Gustafson. Wade shot Carl in the face, and Carl shot Wade dead… so it could’ve gone worse for Sy and Nikki, I guess.

* The IRS investigator was played by Hamish Linklater (The Crazy Ones, The Newsroom), who also just popped up on Noah Hawley’s other FX show, Legion.

* Wouldn’t Stella understand if Emmit simply explained that his brother is trying to frame him by impersonating him in that sex tape?

* Ray’s proposal to Nikki, mid-sex tape, was oddly sweet — even when she complained about the timing: “For Pete’s sake, I’m wearing a hooker wig!”