Things started to unravel in a hurry for both Stussy boys this week on Fargo, while Gloria got a new clue in Ennis’ murder — and a new friend!

Ray’s latest get-rich scheme is to impersonate his brother Emmit, shaving his mustache and putting on a curly wig to go down to Emmit’s bank and open that safe-deposit box. “Emmit” tells the bank manager he lost his key, and when he threatens to take his money elsewhere, the manager scrambles to get the box opened with a drill. In the box, Ray only finds a velvet bag full of ashes… but he uses Emmit’s identity to withdraw ten grand in cash (the fair market value of the stamp), plus a dollar in quarters for the meter. So Ray and Nikki are all set, right?

Well, maybe not: Ray gets called into his boss’ office and presented with photos of him and Nikki together. Parole officers fraternizing with their parolees is strictly forbidden. (“Don’t bang the cattle!” as the deputy director puts it.) They want him to say it was just a one-time thing, but Ray blurts out, “I love her.” He pleads with them not to revoke Nikki’s parole and send her back to jail, so they settle for just firing Ray. To make things worse, Ray walks out of the building to find Sy gloating; he’s the one who ratted Ray out. Oh, and his Corvette has a boot on all four wheels, so that’s a real pain in the neck.

The last time we see Ray, he’s drinking alone at a bar, his box of office belongings next to him, ignoring calls from Nikki. Uh-oh, this isn’t gonna break up our favorite bridge pair, is it? 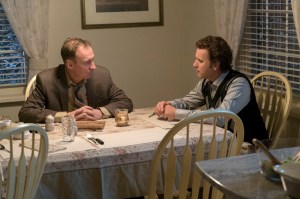 As for the real Emmit, he gets a dinnertime visit from V.M. Varga, who invites himself in for pork chops with the family. He presents Emmit with contracts that would make V.M. a full partner in Emmit’s business. Emmit balks at this, naturally, but starts to listen when V.M. says he’s secured an additional $25 million in credit on Emmit’s behalf. V.M.’s been digging into Emmit’s personal life, though, scanning social media and listening in on phone calls. He knows all about Ray, and asks, “Is your brother going to be a problem?” Emmit assures him he won’t be… but without Nikki, Ray’s got nothing left to lose.

But let’s get to this week’s real MVP: Welcome to Minnesota, Winnie Lopez! (Actually, judging by her accent, she’s already been here a while.) The chipper detective introduces herself to Gloria while in a stall in the ladies’ room, asking her for a spare “putter-inner” or at least a maxi-pad. But Gloria’s too busy to chat: She’s still tugging on the Maurice LeFay thread, and she tracks down Ray at his office, pre-firing. It’s a real Marge Gunderson/Jerry Lundegaard situation, with Gloria quizzing Ray about Maurice and Ray nervously offering, “He liked his reefer!” Gloria perks up, though, when she notices Ray’s last name is Stussy, just like the deceased Ennis: “What are the odds?” Indeed!

Winnie’s on a different (though not unrelated) case, looking into the “vehicular damage” Sy’s Hummer did to Ray’s Corvette. She finds Sy at Emmit’s office, and though Ray isn’t pressing charges, the waitress whose car Sy clipped on the way out certainly is. And she asks if Ray Stussy is related to the Stussy who owns this company — a question that leads to a lot of stammering from Sy. 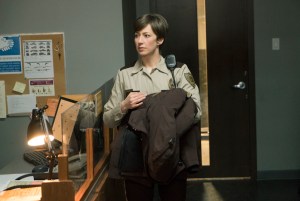 Gloria sits at her kitchen table, studying the parole business card she found in Maurice’s wallet, when she hears a knock at the door. It’s her new pal Winnie — who left a note on Gloria’s car wishing her, “Good luck with the homicide!” — and she’s connected a few dots. Ray and Emmit are brothers, she informs Gloria, and Emmit lives in Eden Prairie… while Ennis lived in Eden Valley. You thought you had a bad day today, Ray? Just you wait.

* Season 1 alum Billy Bob Thornton returned to narrate the charming opening scene, which imagined each Fargo player as a character in Peter and the Wolf, with each assigned an instrument in the orchestra. Nikki, aka The Cat, was a clarinet, while Gloria, aka Peter, was strings. And those instruments popped up again in the episode’s score when those characters entered a scene. Lovely, elegant stuff.

* Yuri Gurka and Meemo were lurking around ominously all episode long. We have the same question Emmit does: “What the s—t are they up to?”

* Those ashes that Ray dumped out of the safe-deposit box? They were the “cremains” of a treasured family dog, apparently. Even Sy mourned the loss of the pooch: “I loved that dog.”

* But really, wasn’t Olivia Sandoval a treat as the ever-eager Winnie Lopez? She’s also had recent roles on The Real O’Neals and The Odd Couple, but this is the first thing I’ve seen her in. More Winnie, please.