Ewan McGregor, take the week off! Wednesday’s Fargo was a Carrie Coon solo showcase, as Gloria traveled to sunny L.A. to dig into her stepdad Ennis’ murky Hollywood past.

First, a super ’70s flashback to the younger days of Ennis, aka sci-fi author Thaddeus Mobley: He’s approached by sleazy film producer Howard Zimmerman, who wants to put his latest book on the big screen. Soon, Thad is caught up in the Hollywood lifestyle, sniffing coke and hooking up with a young actress named Vivian — and handing over his book advance to Howard to finance the film. Because that’s how it works in the movie biz, right?

Back in the present (well, 2010, anyway), Gloria is flying to L.A. next to a business traveler named Paul (Twin Peaks‘ Ray Wise) who’s on his sixth flight this week. She’s still chasing down leads on Ennis’ murder, not yet realizing how futile that is, and books herself a room at the same Hollywood motel where Thad stayed back in the ’70s. There’s a Santa Claus convention in town, and one of the Santas snatches Gloria’s luggage when she’s not looking. Welcome to L.A.! 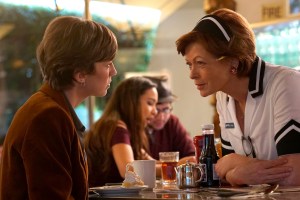 Gloria reports the theft to a local cop (played by It’s Always Sunny‘s Rob McElhenney), who doesn’t have much hope they’ll find the bag: “I wouldn’t hold your breath.” Then she heads to a local diner where an older Vivian now works. Vivian claims not to remember anything about Thad — “It’s not a very clear time for me… the ’70s” — but Gloria leaves her card just in case her memory gets jogged. Oh, and Gloria also finds a very strange box in her hotel room’s closet with a switch on the top. When you flip the switch on, a plastic hand emerges from the box and flips the switch off again. (Is that what they’re leaving in hotel rooms instead of Bibles these days?)

She does get some good news, though: Her luggage is returned to her — cleaned out of anything valuable, though — with a note from the cop inviting her out for a beer. She joins him at the bar, where he teases her for her Minnesota accent and tells her how great Facebook is. When he steps away, though, she notices Paul, the business traveler from her flight, is there, too. They strike up a friendly conversation, and the cop does not like that, bluntly asking Gloria if he’s getting laid tonight. When she says no, he makes a beeline for the door. Welc— oh wait, I already said “Welcome to L.A.,” didn’t I?

Meanwhile, the trail of clues has gone cold, and Gloria’s getting phone messages from her boss Moe in Minnesota to “get your ass back here.” She finds an old screenplay of Thad’s at the Writers Guild office with Howard Zimmerman’s name on it, and tracks him down at a nursing home. Now much older, Howard’s hooked up to all kinds of machines and speaks with an electronic voice box. He remembers Thad as “a failure” and rambles on about how he used to find meaning in the people he met in life… but doesn’t any longer. A nurse tells Gloria he’s been that way “since the accident.” What accident is that? 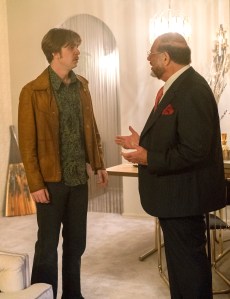 A ’70s flashback fills us in: A coked-up Thad arrives at Vivian’s to find Howard there. He demands that Howard give him his money back, but Howard tells him “it’s all gone.” Vivian is even more direct: “I used you, asshole. Don’t you get it?… You’re a piggy bank.” Howard puts Thad in a chokehold and tells him to get lost, but Thad fights back, grabbing a cane and savagely beating Howard with it. He almost swings at Vivian, too, but instead, he just leaves her with: “You’re a bad person.”

When a guilt-ridden Vivian reaches out to Gloria to tell her that story, Gloria tries to connect it to Ennis’ murder, before realizing: “It’s just a story.” She heads back to Minnesota dejected, where she and her son Nathan are the only ones at Ennis’ funeral. But her partner Donny arrives with a hot tip: Fingerprints from the crime scene match a certain Maurice Le Fay, who was mysteriously killed in a “freak accident” with an air conditioner. An air conditioner in winter, Gloria wonders? Look out, Ray and Nikki… Gloria Burgle is coming for you.

* We were treated to a charmingly animated version of one of Thad’s sci-fi books Gloria read on the trip: the deeply sad tale of a robot stranded on a planet when his human pilot dies in a crash. With a chipper refrain (“I can help!”), the robot watches entire civilizations being built and destroyed until aliens land and beam him home. He’s told he recorded 2.38 million years of data — he did help! — and now he can finally shut himself down. And he does, with a switch reminiscent of that weird hotel box. (Which Gloria kept, by the way.)

* We also learned where Thaddeus Mobley got his alias from: After he beat up Howard, he retreated to his hotel room to throw up. Inside the toilet was an insignia for toilet manufacturer Dennis Stussy & Sons, with the D rubbed off. Voila! Ennis Stussy.

* Didn’t the ’70s flashbacks with young Thad remind you of Fargo Season 2? They even had the same split-screen framing. I wonder if Vivian borrowed any of Peggy Blumquist’s wardrobe…

* This was a great week for guest stars: Along with McElhenney and Wise, we got Lady Dynamite‘s Fred Melamed — a veteran of the Coen brothers’ A Serious Man — as sleazeball producer Howard Zimmerman, and Frances Fisher (Resurrection) as the older Vivian. And, in a cool twist, young Vivian was played by Fisher’s real-life daughter Francesca Eastwood.

* As much as I missed seeing Ray and Emmit, this episode was a fun little diversion, and did serve to connect the Gloria and Ray/Emmit plotlines… although I guess she could’ve learned Maurice was the culprit without flying all the way to L.A., huh?