The sibling rivalry between Fargo‘s Ray and Emmit only got uglier this week… and yeah, even a little bloody, thanks to Nikki.

Ray’s conscience is nagging him about Maurice’s death by A/C — which is good, because he seemed a little too blasé about it last week, frankly. He shares his troubles with Nikki, and she responds by slapping him across the face. Twice. “There’s something wrong with your chi,” she informs him. “You’re all blocked up, babe.” The only way he can unblock himself, Nikki decides, is to settle his feud with Emmit once and for all. Either he needs to bury the hatchet with his brother, or steal back that damn stamp himself.

They opt for the less mature option, with Ray distracting Emmit with a heart-to-heart talk while Nikki slips inside his house to hunt for the vaunted stamp. It used to be framed on the wall, but in its place, Nikki finds a painting of a donkey. (She also finds a receipt for a safe-deposit box — presumably where the stamp is being held now.) This apparent betrayal infuriates her, so she… unbuttons her pants? See, Nikki’s having her period, so she leaves Emmit a message smeared on the donkey painting in her own menstrual blood: “Who’s the ass now?” Oh, and she also left a bloody tampon in one of Emmit’s desk drawers, just in case there was any question where the blood originated.

Ray’s actually feeling better after his chat with Emmit; he thinks he may have actually unblocked his chi. Well, it gets all blocked up again when Nikki tells him about the donkey painting (“You see the symbolism”) and her tampon stunt. Back at the house, Emmit calls in Sy and shows him the damage Nikki’s done. He wasn’t hiding the stamp after all; he just broke the frame, and was getting it fixed. But he’s had it with Ray: “The gloves are off now. He is D-O-N-E, done.” That’s music to Sy’s ears, who’s already called Ray “a loser” and jumps at the chance to cut the cord on Emmit’s behalf.

That leads to a not-so-festive holiday breakfast between Ray and Sy. Ray apologizes for the “mixed signals,” but Sy’s firm: Emmit will never speak to him again. He also lays a crisp twenty-dollar bill on the table, telling Ray that’s “the last dime” he’ll ever see from his brother. Ray calls Sy an “errand boy” and flips him the bird on the way out, but Sy gets the last laugh: He deliberately backs his white Hummer into Ray’s Corvette, drives forward a little and then smashes into it again. Merry Christmas!

But things didn’t exactly go smooth for Emmit this week, either: 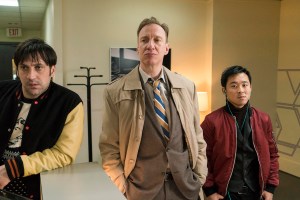 A LOT OF PROBLEMS | The more successful Stussy brother turns to a business associate named Irv to find this V.M. Varga fella and see if he’ll just take his money back. Irv’s not exactly a computer whiz, though: He hunts and pecks his way to Google and enters “V.M. Varga,” clicking on the only search result. It’s some kind of virus that shuts down Irv’s computer, along with his secretary’s. And when he returns to his car in the parking garage, he finds Varga’s Ukrainian henchman Yuri Gurka waiting for him. Yuri and his Asian counterpart Meemo toss poor Irv over the ledge to his death.

V.M. is taking advantage of his newfound “partnership” with Emmit, parking a huge big rig in one of Emmit’s lots. Sy tells Emmit, “I’m a little worried about the escalation,” and wonders what could be in the truck: Drugs? Guns? Slave girls? OK, probably not slave girls. Still, Sy wants them to keep their distance, lest they get tied up in any of V.M.’s most likely illegal activities. But V.M. makes that difficult when he brings Yuri and Meemo into Emmit’s office and brazenly sets up shop, bringing in dozens of illicit-looking file boxes with him.

Emmit and Sy play “Minnesota nice” and offer to pay back the loan in full with interest, but V.M. refuses: “We’re partners now.” He says he likes the parking lot business because it runs on cash, so the numbers are easy to fudge. He has big expansion plans for Emmit’s business, and he’s leaving Yuri and Meemo behind to watch over things while he’s gone. Oh, and he apologizes for what happened to poor Irv, but “we can’t have people out there investigating things.” 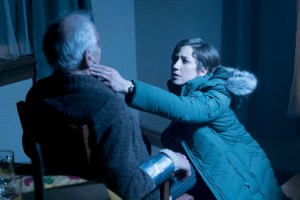 * Speaking of investigating things: Gloria is on the trail of her stepdad Ennis’ killer, interviewing the gas station clerk whose phone book Maurice tore a page out of. When she sees the page missing had Ennis’ name on it, she takes the phone book as evidence. But she’s about as tech-savvy as old Irv, complaining to her new boss Moe — oh hi, Shea Whigham! — that she doesn’t need any fancy computers: “The old way works just fine.” Shame that Irv didn’t live long enough to meet Gloria; they could’ve exchanged letters that they handwrote with a quill pen by candlelight.

* This episode was just a treasure trove of memorable quotes, wasn’t it? The gas station guy asking Gloria about making meth from orange juice concentrate, Nikki’s characterization of the Ennis murder as “unfathomable pinheadery”… but top prize goes to Gloria: “They glued his nose and mouth shut. Are we thinking ’cause of death’ is somehow a cliffhanger?”

* Remember that weird German prologue from last week’s premiere? “Yuri Gurka” was the name of the person the German officer thought he was interrogating — though the guy insisted that wasn’t him. So is Varga’s henchman the real Yuri Gurka?

* Gloria’s hatred of technology definitely goes both ways. Her cell phone gets terrible reception, and automatic doors refuse to acknowledge her presence. So what’s up with her and electromagnetism? Does she have a metal plate in her head or something?