Zip those parkas up tight, folks: FX’s crime anthology Fargo is back for another season of Midwestern murder and mayhem… all served very well chilled.

We meet Season 3’s central duo — brothers Ray and Emmit Stussy, both played by Ewan McGregor — at a lavish party for Ray and his wife Stella’s 25th wedding anniversary. Emmit is like the Don Corleone of Minnesota: a dashing, ultra-successful real estate tycoon ducking out of his own party to take closed-door business meetings. Ray, on the other hand, is a balding, paunchy parole officer who’s forced to humble himself and ask his brother for a loan to buy his girlfriend Nikki an engagement ring. He justifies the request by reminding Emmit: “I figure you still owe me from what happened when we were kids.” 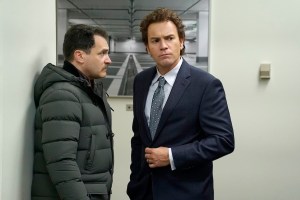 Emmit and his number-crunching consigliere Sy Feltz don’t see it that way, though, with Sy listing off all the ways they’ve already helped Ray out financially. “It’s not the best time,” Emmit says finally. Not satisfied, Ray demands Emmit give him his “stamp” back. It seems that when their father died, Ray and Emmit were given the choice of inheriting their dad’s stamp collection or his Corvette. Ray took the sports car… and now he’s regretting that shortsighted choice. Ray walks out empty-handed, and as he leaves the party, we get a good look at his inheritance — the now beat-up Corvette, with a license plate that says “ACE HOLE” — and it’s aged about as well as Ray has.

Still in need of cash, Ray turns to a parolee of his: spaced-out stoner Maurice, who Ray finds half-asleep in a dive bar. Ray presents Maurice with a delicate proposition: “I got a place that needs some robbin’.” If Maurice breaks into Emmit’s house and steals Ray’s stamp back for him, Ray promises to forget all about the drug test Maurice just flunked. Simple enough, right? Well, don’t forget, this is Fargo, where even the simplest crimes go off the rails in a hurry. 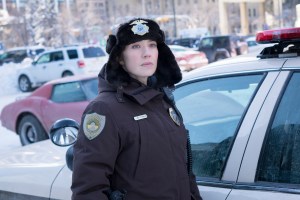 But before we get there, let’s meet police chief Gloria Burgle, aka the Marge Gunderson/Molly Solverson of Season 3. She’s an aw-shucks single mom living with her teen son Nathan and her crotchety old stepdad Ennis. It’s Nathan’s birthday, and Ennis presents him with a Norman Rockwell-y figurine he crafted for the occasion. Oh, and Nathan’s dad has found a new love by the name of… Dale, and Ennis isn’t exactly progressive on that subject. But Gloria explains to Nathan that even grumpy Ennis isn’t all bad: “Deep down, we’ve all got something positive inside us.” (How very Marge of her!)

So while Gloria and Nathan head out for a birthday symphony and Ray and Nikki hit up a local bridge tournament, Maurice is on a mission to find Emmit’s house and steal the vaunted stamp. Only he drops a burning joint in his lap while driving, and in the mad scramble that follows, he accidentally flings the note with Emmit’s address out the window into the Minnesota night. He trudges through a snow bank to find it, but soon gives up: “Screw it, I remember it.”

Maurice is convinced the “town was something biblical,” and thinks he’s found it when he spots a sign for Eden Valley. (Emmit actually lives in Eden Prairie, though.) Knowing that Emmit’s last name is “Stussy,” Maurice tears a page out of the phone book and makes a beeline for the Stussy address that’s listed. And in that home resides… Gloria’s stepdad Ennis Stussy! (No relation.) We see the old guy hobble to the freezer for a swig of vodka before an ominous car pulls up outside.

Nathan remembers he forgot the figurine his granddad made for him, so Gloria makes a U-turn and returns home to find the house trashed. Ennis is sitting in the kitchen, his wrists duct-taped to a chair, the freezer door left swinging open. He’s dead. She searches the house, and Maurice has already cleared out… but under the floorboards, she discovers a secret compartment with a box in it. Inside the box, she finds a stack of sci-fi novels, and the cover of one matches the pose of the figurine Ennis gave Nathan, only with an alien and an astronaut. We couldn’t say it any better than Gloria does: “What the heck?” 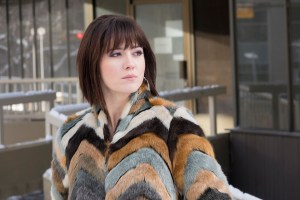 After finishing third in a thrillingly filmed bridge tournament — yes, you read that right — Ray and Nikki are enjoying a celebratory bath together when Maurice barges in: “I got ’em, Ray. I did. But I won’t lie: It didn’t go smooth.” He says the guy didn’t cooperate, and hands Ray a book of ordinary stamps. Ray wants to know what Maurice did, exactly, but Maurice pulls a gun on him first, demanding five grand for his trouble. Nikki stands up nude in an effort to distract Maurice, but she manages to distract Ray, too, and Maurice escapes, gun in hand, demanding his money by tomorrow.

Nikki has something else in mind for him, though. She calculates how long it’ll take Maurice to get outside while loosening the screws on her wall-unit air conditioner. When Ray spots him on the sidewalk outside, he gives the A/C a sharp kick, and bam! It flattens Maurice on the sidewalk. Nikki makes a faux-panicked call to 911 and orders Ray to take the back stairs and burn the stamps. “You’re so sexy,” he marvels. One episode in, and two dead bodies… not too shabby, Fargo. 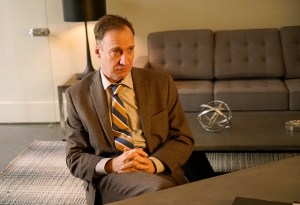 * Emmit and Sy also met with a mysterious man named V.M. Varga, whose firm lent Emmit a cool million dollars. But he’s not seeking repayment: It was an investment “so we can better disguise our activities.” So they’re laundering cash, using Emmit’s real estate business as a front? Much more to come on this front, I’m guessing.

* Like last year, Season 3 kicked off with a seemingly unrelated prologue, with a man pleading his innocence to a German officer in 1988 East Berlin. The man insists he didn’t strangle his wife, but the officer tells him: “For you to be right, the state would have to be wrong.” Feels like a non sequitur… but is it possible the accused man turns out to be a young V.M. Varga?

* It’s a shame we lost Maurice so early in the season, because I really enjoyed Scoot McNairy’s performance as the dim-witted crook. (“Where does the President of the United States buy his clothes?”) Maybe we’ll get some flashbacks of him, at least?

* I don’t trust Nikki. Ray seems to be truly head-over-heels in love with her, but she’s giving off a vibe like she’d stab him in the back without a second thought if it benefited her in some way.

* Fargo always throws in a few Easter eggs related to other Coen brothers movies, and I caught a couple nods to The Big Lebowski in the premiere. Just like Maurice, Jeff Bridges’ The Dude dropped a burning joint in his lap while driving. And David Thewlis, who plays V.M. Varga here, was in Lebowski as the giggling video artist Knox Harrington. If you spot any others, flag ’em in the comments for me.

Give the Fargo Season 3 premiere a grade in our poll, then hit the comments with your post-premiere thoughts.