If Orange Is the New Black had a lighthearted, rough-and-tumble kid sister who liked putting people in headlocks, that sister would look a lot like Netflix’s GLOW.

That makes sense. GLOW hails from OITNB‘s Carly Mensch and Nurse Jackie‘s Liz Flahive, who have a proven track record of wringing comedy from unlikely situations. (OITNB boss Jenji Kohan also is an executive producer on GLOW.) The subject matter here gives them a head start: Though not a reboot in the usual sense of the word, GLOW‘s heritage is the 1980s TV program of the same name — which stands for Gorgeous Ladies of Wrestling — a schlocky, silly female counterpart to the wildly popular World Wrestling Federation broadcasts of the time.

The Netflix series chronicles a B-movie director’s attempts to cash in on the wrestling craze despite various roadblocks, the largest of which is a cast full of women with little experience in the ring and/or in front of a camera. One major exception is Ruth, played with plucky zeal by Community grad Alison Brie. Ruth is a non-working, Los Angeles-based actress who attends the show’s casting call out of desperation. When she gets the gig, she joins a ragtag(team) ensemble that includes a professional stunt woman, a party girl, some hairdressers, the daughter of a famous wrestler and someone who fancies herself part wolf, among others. 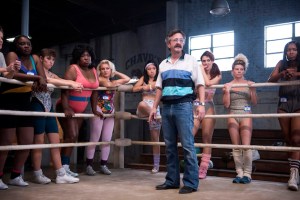 The season, which premieres on Friday, June 23, follows the show-within-a-show’s uneven path from concept to first episode. Much of GLOW‘s joy and comedic success comes from watching neurotic Ruth and her fellow wrestling noobs learn the moves and hone their ringside personas; my only real beef with the series is that the casting process goes on longer than feels necessary, delaying the point where the women can start to do their rope-bouncing, pile-driving thing (or, at least, fake it until they make it).

As hack director Sam, Marc Maron (Maron) is a curmudgeonly ball of cutting one-liners and exasperated sighs; think a more likable, though no less messed-up, version of Litchfield Correctional Facility’s Caputo. And Betty Gilpin (Nurse Jackie) is perfectly cast as Debbie, a new mom and former daytime drama actress who gets drawn into the action after an unexpected betrayal blows her world asunder. (She also rocks some rather amazing ’80s hairstyles.) 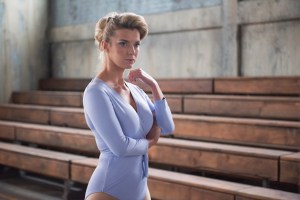 That brings us to GLOW‘s look, which lovingly embraces the Reagan era’s kitschier notes — thong leotards, blue eyeshadow, neon everything — without letting them distract from the women’s very compelling journey toward creating something new and exciting. In a sense, that’s the approach the Netflix series takes toward its source material, as well, treating an often-mocked concept with gentle humor and a lot of respect.

Wrestling is “a soap opera! This whole thing is a soap opera!” one character exclaims in a moment of happy revelation. Damn straight — and GLOW is the behind-the-scenes look that’ll suck you in faster than a Friday cliffhanger.

THE TVLINE BOTTOM LINE: A very strong, diverse ensemble? A story that keeps you coming back for more? An appreciation for female-centric subject matter? Fans of Orange Is the New Black will find themselves on familiar ground with GLOW — and that’s a very good thing.