Warning: The following recap contains spoilers from Episode 6 of Orange Is the New Black Season 5. If you’re behind on your binge-viewing, bookmark for safekeeping and return to discuss at a later time.

Call it a bittersweet surprise.

At the midway point of Orange Is the New Black‘s fifth season, Samira Wiley reprises her role as the late Poussey Washington. The scene, which comes towards the end of Episode 6, serves as a flashback to Taystee’s second-ever day at Litchfield. 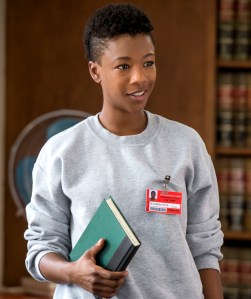 After making her way into the library, Taystee takes notice of two white inmates who are bonding over a shared love of Weight Watchers. After they leave for the commissary, Taystee hears a voice from behind a row of bookshelves, mocking the inmates for their mind-numbing conversation. Taystee eventually joins in on the mockery, before Poussey reveals herself and makes a formal introduction. She immediately takes a liking to Taystee due to their shared love of Alice in Wonderland, and tells the new inmate to come to her if she ever needs anything.

Cut to present day, and Taystee is joined by Cindy, Watson, Alison and Piper, who have collected all of the snacks and tampons sent over by the governor’s office in an effort to begin negotiations for the hostages. Taystee refuses to be bribed, and wants real justice served in the wake of Poussey’s death. Piper then FaceTimes the governor’s assistant, allowing Taystee to declare that the prisoners will not rest until they’re taken seriously. She then proceeds to light all of the snacks and tampons on fire in an act of protest.

In addition to a glimpse at Taystee’s Litchfield origins, the episode also flashes back to her 18th birthday, when her foster parent informs her that her biological mother, Mia, has reached out about meeting her. They meet in a park and immediately bond over Toddlers and Tiaras, but the warm and fuzzy feeling dissipates after Mia’s husband and other, younger daughter turn up unexpectedly on their way to a church sale.

Mia is ultimately too afraid to introduce her family to Taystee, instead ID’ing her as a former neighbor’s kid. She promises Taystee that she wants her to be part of her family, but eventually chickens out when it comes time to take her home, giving her the bogus (and heartbreaking) excuse that “it isn’t a good time for us.”

As for the rest of the episode…

* After hooking up with Nicky, Lorna reveals to her on-again/off-again prison girlfriend that she and Vinny are pregnant — or at least she thinks they’re pregnant because her nipples are enlarged and she’s constantly turned on. It’s at this point that Nicky tells Lorna that she loves her very much, but she can’t keep leading her on any longer.

* Bayley attempts to kill himself by drinking all of his father’s canine dye. The dye is non-toxic, but his failed suicide attempt is enough to make his parents realize that he needs serious help.

* After learning that Piscatella never made any note of an additional five years to her sentence, Maria relocates to the garden to lay low and sit out the rest of the riot, hoping she can avoid more jail time.

* Freida plants maps for Norma, Gina, Gloria, Anita and Yoga Jones to come join her in the underground prison bunker. They’re initially hesitant, until she reveals to them what looks to be an abandoned gym stocked with snacks, computer games, shuffleboard and a basketball hoop.

* Pennsatucky is put on trial by the inmates for her involvement in accidentally shooting off part of Leanne’s finger. She’s let off easy with community service when the inmates come to the realization that the justice system is about rehabilitation, and that they need to treat each other like human beings in light of recent events.

* Boo — who enters the episode to the theme from Law & Order — serves as Pennsatucky’s lawyer. In perhaps the funniest moment of the season, she calls alleged Saved By the Bell superfan Angie to the stand, who despite being able to point to the caffeine pills episode as her favorite, has clearly never seen any of the Malibu Sands episodes featuring a pre-King of Queens Leah Remini. (#LongLiveStaceyCarosi)

* Watson and Soso forge a bond over their shared grief. To help get Soso’s mind off of Poussey’s death, Watson takes her out to the track and gets her running.

* Aleida appears on New York Metro to speak out about the riot at Litchfield, but immediately screws up and drops an F-bomb (or two!) on live TV.

What did you think of Samira Wiley’s brief return as Poussey in Episode 6? And how are you feeling about OITNB Season 5 overall as you reach the halfway mark? (When commenting, please be respectful of those who don’t binge at warp speed. In other words, discussions should be about Episodes 1-6 only; subsequent recaps will focus on later developments.)