Last year, Melissa James Gibson and Frank Pugliese were handed one of TV’s most daunting tasks: Succeed House of Cards creator Beau Willimon at the helm of Netflix’s prestige political drama four seasons and 52 episodes into the series’ run. Well, according to preliminary Season 5 exit polls, the duo — who were promoted to co-showrunners after several seasons of working as EPs under Willimon — are enjoying mostly solid support from critics, some of whom (read: me!) approached these 13 new episodes with a healthy degree of skepticism. The fact that House of Cards didn’t crash and burn like Leann Harvey’s ill-fated Mercedes made me much more enthusiastic to hop on the phone with Gibson and Pugliese to break down Season 5’s biggest twists, turns and unanswered questions.

TVLINE | I want to lead with what is arguably the biggest moment of the season: Claire [Robin Wright] murdering Tom [Paul Sparks]. That marked a major shift for the character and the series. Was it a no-brainer in your eyes? Or did you heavily debate whether to have Claire essentially become as evil as Frank [Kevin Spacey]?
MELISSA JAMES GIBSON | It was heavily debated. Part of what we were grappling with is how is Claire really Frank’s equal? On a certain level, she’s not his equal until her hands are as dirty as his. Until she can prove that she’s willing to stop at nothing to get what she wants. Claire’s ambition is a major theme 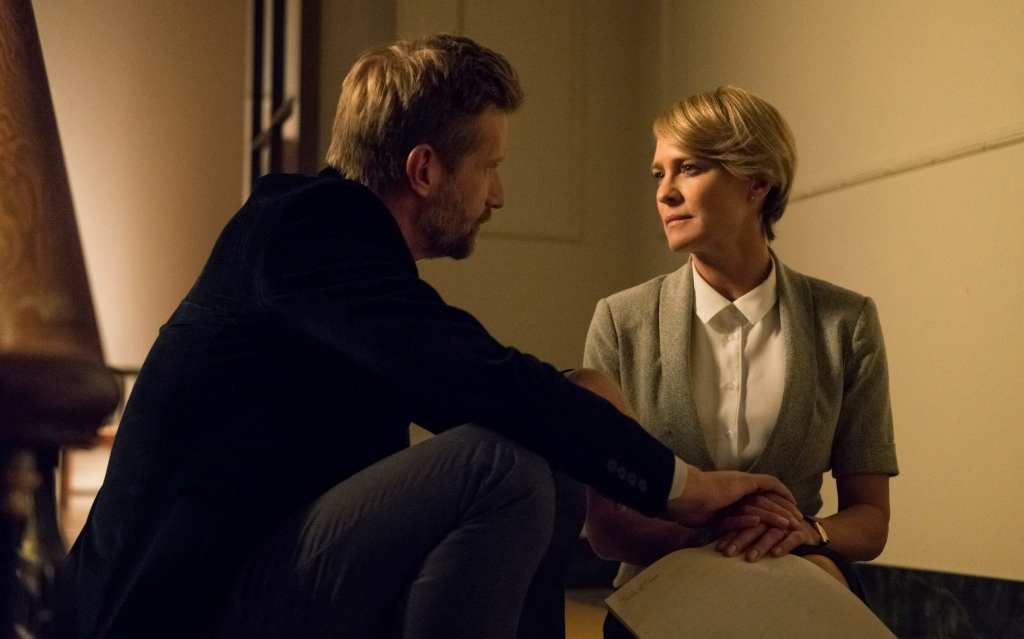 this season, so, of course, it had to be justified. It was actually really painful. It was painful to write and shoot. [Tom] is a beloved character. And I believe that a real depth and love had developed in that relationship. It was the highest price she had to pay.
FRANK PUGLIESE | At some point it would’ve been impossible not to do it. It had to happen, as difficult as it was. So much of the arc of the season is Claire coming to terms with her ambition and embracing it and figuring out how to become different that Francis but also his equal. The world of the show is very corrupting and there’s a price you pay for power. And many times it’s some piece of your humanity. And, in a way, Tom was asking her to be human.
GIBSON | And now she is fully as culpable as Francis. For a while on the show, if anyone was going to go down it was going to be him. Now it’s no longer true. The stakes could not be higher for the two of them.
PUGLIESE | And when Francis learns [what she’s done] it makes him realize that he has someone formidable in front of him, and it happens to be his wife.

TVLINE | Robin Wright is an exec producer on the show as well as a frequent director. Was she on board with it?
GIBSON | She had really strong feelings. She loved the character, she loved working with [Paul]. This was a big, long discussion. But we all landed on the fact that this was the correct and brave path to follow.

TVLINE | A part of me thought the season was going to end with someone opening up a mysterious package containing a copy of Tom’s manuscript on the Underwoods. Tom was a smart guy. It doesn’t seem out of the realm of possibility that he would’ve had a plan for his book in the event something happened to him. Is that fair?
PUGLIESE | It’s so fair. I think we’ll see that. In the [finale], the [tour guide] he was involved with begins to ask the question of where is he. I don’t think anyone should get away with anything too easily on this show.
GIBSON | It’s a totally valid question.

TVLINE | One ongoing frustration I have with the show — and this is something I shared with Beau previously — concerns so many of the Underwoods’ biggest enemies getting killed off. For me, so much of the tension of the show is wondering when Frank and now Claire will get caught and be forced to pay for what they’ve done. But that tension is undercut every time a threat is killed off. It feels like it’s a bit of a narrative cheat. I imagine that must be something you struggled with this season.
PUGLIESE | That is definitely something we’ve talked about. One of the things Season 5 is trying to accomplish is [putting forth the notion] that maybe it’s not someone outside of the marriage that’s going to catch either one of them. Maybe it’s someone in the marriage. As much as they need each other, they may turn out to be each others’ biggest opponent.
GIBSON | It should not feel like murder is the magic answer. We agree with you. That’s the dance: To [balance the] pursuit of holding them accountable with keeping them as one-step-ahead as possible, without it being too easy.

TVLINE | I feel like the show is never better than when Claire and Frank are at odds, so it’s encouraging to hear you talk about them being each others’ biggest antagonist.
GIBSON | It’s almost like they get off on it.
PUGLIESE | And it’s how they gain each others’ respect at the same time. There’s something really perverse about that.

TVLINE | Also, she’s the only person that truly scares him.
GIBSON | I agree. And I think one of those moments for him is when he understands that she’s killed Tom. He’s like, “Oh, I thought I knew you… ” We leave them in a different place this season. The juice of the show is the degree to which their destinies are inextricably intwined. 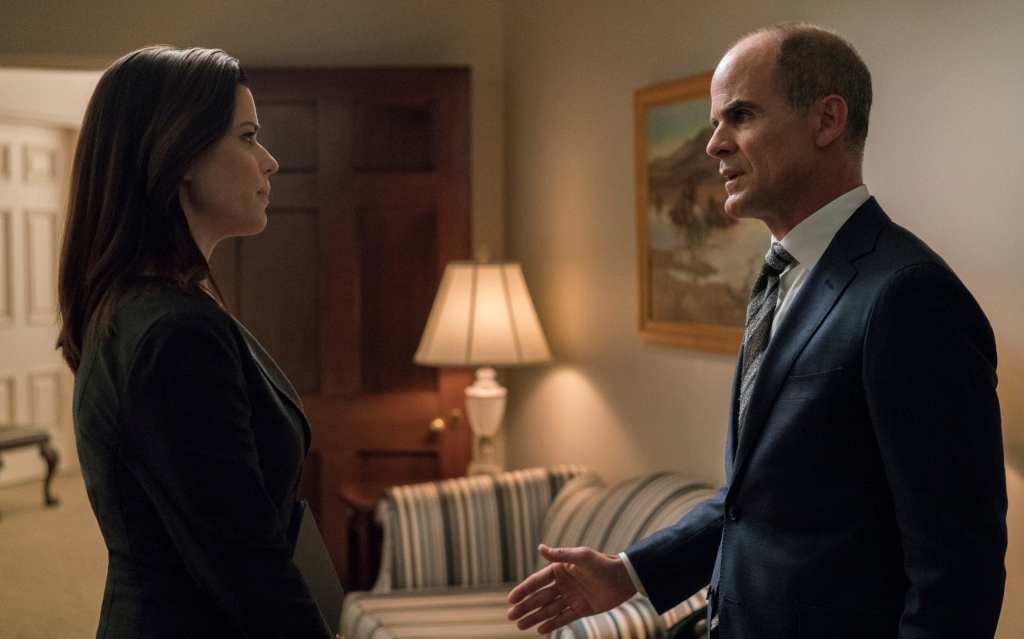 TVLINE | Speaking of neutralized threats, can you confirm that Leann [Neve Campbell] did in fact die in that accident?
PUGLIESE | We don’t need to confirm that. [Laughs] Who knows? Season 6 will tell us.

TVLINE  | We never really learned how badly Catherine Durant was injured from her fall down those stairs…
PUGLIESE | She’s injured enough where she can’t testify, which was [Frank’s] goal. Or she’s injured enough that she realizes if she testified something worse could happen to her. But we’ll find out how bad off she is [in Season 6].

TVLINE | Is the Zoe murder case closed now that Doug [Michael Kelly] has taken the fall for the crime?
PUGLIESE | I don’t think it’s completely closed, because there’s a doubt in Hammerschmidt [Boris McGiver] that I don’t think can go away.

TVLINE | Is Michael/Doug still a part of the show moving forward?
GIBSON | It’s pretty hard to imagine the show without him. If [the series] is a triangle, he’s the third [person].
PUGLIESE | Doug has been haunted by what he’s done [to Rachel], and Frank and Claire take advantage of this and set him up in a way. He still doesn’t know what happened to Leann. He still doesn’t know how the rest of his so-called confession is going to play out. These are all open questions.