When The Carmichael Show last aired over a year ago, Jerrod and his family were split among presidential candidates Hillary Clinton, Bernie Sanders and Donald Trump. In Wednesday’s Season 3 premiere, Trump, now president, is once again at the center of a discussion — this time about rape culture and the importance of consent.

In “Yes Means Yes,” Maxine learns that her former co-worker Sarah has written a Facebook post in which she reveals she was raped. Maxine reads the post at the dinner table; to sum up, Sarah writes that she went back to a man’s place and agreed to make out with him but never agreed to have sex. Afterward, Joe, Cynthia and Jerrod express doubt as to whether she was actually raped. Jerrod even goes so far as to say that “if we just jump to conclusions, a rape accusation can really ruin a man’s life.” Disgusted by the response, Maxine argues that verbal consent is always required, which leads to a larger discussion about rape fantasies and safe words — you know, like Nekeisha’s safe word: Mike Pence.

Bobby, attempting to absorb all of this information, suddenly stands at the far end of the table, petrified that he might have raped a one-night stand during a drunken hook-up. As he explains to the family, the sexual encounter seemed innocent enough, but he was too intoxicated to remember whether he was ever given a verbal “yes.” He doesn’t remember her ever saying “no,” either… except for before their date, when she playfully told him that they definitely weren’t having sex that night.

The Carmichaels’ conversation then transitions back to Jerrod’s earlier point. Being the contrarian that he is, Jerrod argues that being falsely accused of rape can be nearly as damaging on the psyche as the act of rape itself. Maxine quickly dismisses the idea, pointing out that those famously accused, but never convicted — such as Kobe Bryant, Roman Polanski, Julian Assange and Cee Lo Green — all have continued to find work. She then suggests that the election of President Trump — without ever mentioning him by name — is proof that the country as a whole doesn’t pay enough attention to sexual assault or its victims.

“A man that bragged about sexually assaulting women, and then dismissed it as ‘locker room talk,’ was elected president of the United States,” she says, alluding to Trump’s infamous Access Hollywood bus tape scandal. “Clearly, we don’t take it seriously enough.” 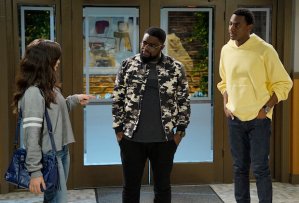 Bobby, whose fear isn’t helped by the fact that his date hasn’t responded to any of his texts, is further terrified when she posts the following tweet: “Trying to forget about last night, but I can’t. Need good energy right now.” And that’s when he decides to confront her in person, because “the only thing worse than being the type of guy that does something like this is being the kind of guy who tries to get away with it.”

The woman, whose name we learn is Natalie, ultimately assures Bobby that she wanted to have sex with him and that he did nothing wrong. As for her earlier tweet? Well, Bobby just happens to be really bad at sex, and she’d like to forget about their encounter altogether. (Needless to say, there won’t be a second date.)

What did you think of The Carmichael Show‘s discussion on rape culture, and the Season 3 premiere as a whole?