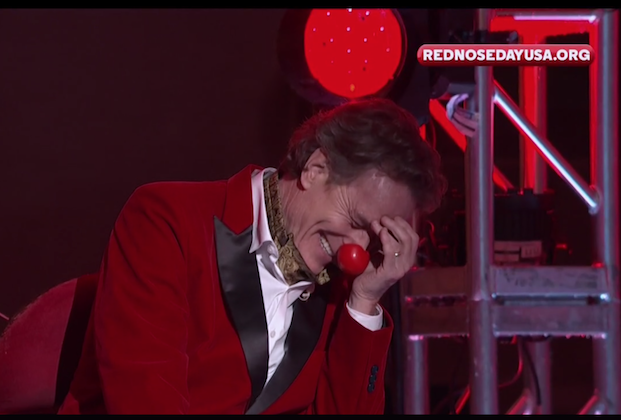 Many members of the movie’s cast — including Hugh Grant, Keira Knightley, Andrew Lincoln, Liam Neeson, Rowan Atkinson and Colin Firth — took part in the project, which provided a “Where are they now?” look at characters from the popular romantic comedy while highlighting the importance of Red Nose Day, a charity that provides various forms of help to needy kids.

Nighy’s absence from this airing of the short film was confusing, given that he’d appeared in a trailer for the event and that Billy was very much a part of the project when it aired in the United Kingdom in March.

TVLine hears that the Billy Mack segment was cut from Thursday’s broadcast for time. The good news: “Christmas Is All Around” fans can catch the rocker doing his thing in the full version of the sequel, which can be streamed in full on NBC’s Facebook page.

Another change that happened when the 2003 film’s continuation crossed the pond: Laura Linney, who was unavailable to be part of the U.K. airing, filmed a scene filling us in on what’s happened with her character, Sarah, since we last saw her kicking out Hot Karl in favor of spending a sad Christmas with her troubled brother.

Did you miss Nighy’s character in the Red Nose Day video? Are there any other Love Actually characters you would’ve liked to have seen in the update? Sound off in the comments!