Along the way, Olivia Benson did something she’s never had to do in her entire time on the force. But we’re getting ahead of ourselves. First, a brief recap of the back-to-back episodes:

Three masked men break into a Syrian family’s restaurant, steal the money, kill the father, rape both of his adult daughters, then kill one of those daughters. Along the way, the criminals spray-paint “Muslims must die” on the refrigerators.

Evidence leads Benson & Co. to realize that another man was in the building during the rapes and murder. Turns out, it was Yusef, brother of Maya, whose husband and daughters were attacked. He hesitated to come forward, though, because he’s an illegal immigrant and he’s gay: If he’s deported, he’ll likely be killed. But he can identify one of the men from the attack — Hector Ramirez, a worker whom the restaurant owners had to let go weeks before. 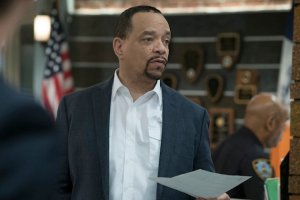 The SVU team promises Yusef that he won’t be deported… and then Immigration and Customs Enforcement officers deport him. When Hector won’t budge, Olivia uses the aforementioned tactic she’s never stooped low enough to employ: She threatens Hector’s illegal immigrant wife, Soledad, with deportation (and placement for her daughters in foster care) if the woman doesn’t drop her phony alibi for Hector. It’s a game of chicken, but Soledad eventually gives in for fear of losing her children. So yes, Liv wins, but it’s an ugly win.

Then they get Hector to admit that he was there — and to identify two white co-workers of his from another job, named Mitchell and Steven, as the ones who raped and murdered the members of the family.

Mitchell and Steven are horribly racist idiots who say things like “Mexicans love tequila and raping. Just ask the president.” And Hector testifies in front of a grand jury that they’d come along for a robbery of the restaurant (because he was angry about being fired and wanted to get back at Maya and her family), but then things had spiraled out of control while he watched.

Outside the courthouse, though, another white supremacist shoots Hector, who eventually dies. So the team is once more without the evidence it needs… until Maya suddenly remembers seeing the faces of Mitchell and Steven on the night of the attack. Liv is skeptical, given that the woman hadn’t mentioned that detail, but Maya says she’d been afraid of the men’s threats to come back and kill her if she said anything.

“Her story isn’t perfect, but it’s plausible,” Barba later tells Olivia before putting Maya on the stand… where she lies and says that she told Olivia about seeing the men’s faces weeks before Hector’s death. And Barba is kind of into Liv lying about it on the stand… though he won’t come out and tell her to perjure herself.

But Liv can’t bring herself to lie to the jury, which earns her the anger of Maya and her daughter, Lela. But a wife of one of the white guys overhears, and Liv exhorts her to tell the truth about her husband’s whereabouts on the night of the rape and murder — especially because he’s abusive to her, and putting him away would be a very good thing. So White Wife tells the truth, causing her husband to rush the stand in anger before bailiffs pull him away.

But don’t feel too good about the justice that is eventually served: Chief shows up at Liv’s office after the verdict to report that a mosque in East Harlem just got firebombed. “Five dead,” he tells a shocked Olivia and Barba.

Now it’s your turn. What did you think of the finale? Grade it via the poll below, then hit the comments!