If you’re reading this, I’d like to congratulate you on making it through ABC’s musical Dirty Dancing remake. I know the journey was perilous, so I intend to reward you handsomely for your courage.

But I’m not technically here to review the movie. (For that, you can consult Kim Roots’ A+ write-up of this D- movie, in which she notes that ABC “wouldn’t know what made the original film special if it hit them in the pachanga.”) Instead, I’m here to ask the important questions. The tough questions.

I should also admit that, because I wasn’t allowed to watch the original movie in my younger days, this is — tragically, I know — my first exposure to the timeless tale of Johnny Castle (played here by Colt Prattes) and Francis “Baby” Houseman (Abigail Breslin). Let’s begin:

1. Is it just me, or do Baby and Johnny have… no chemistry whatsoever? In fact, I’d go so far as to say that Johnny has more chemistry with Katey Sagal’s Vivian — as does Baby with Nicole Scherzinger’s Penny. (If those last two had kissed, I would not have been surprised.)

2. Also, given Breslin and Prattes’ considerable height difference — plus that giant mane of brown hair he’s sporting — do Baby and Johnny give anyone else Beauty and the Beast vibes?

3. Do you think Glee‘s Nolan Funk auditioned for the role of Johnny? If not, he really should have.

4. And why doesn’t Scherzinger have a bigger career in the U.S.? (She’s huge in England, whether you believe me or not.)

5. Speaking of Scherzinger’s career, isn’t Penny a dance teacher at the lodge? Why is she also selling wigs? Is she a wig butler and a butt wiggler?

6. The musical numbers in this movie are all pretty ludicrous, but some of them aren’t so bad, right? “Fever” was… kind of impressive? 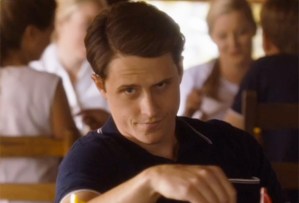 8. Have you ever in all your damn life seen a face that more obviously foreshadows an attempted rape? (Like, be a little more smug, Mr. Harvard.)

9. “It’s good for the human brain to learn new things,” Baby tells Johnny. “It keeps you from getting senile.” (Wow, Baby must be really fun at parties, huh?)

10. Is it entirely necessary for Dr. Houseman to tell Johnny he’s a terrible person while he’s treating Penny for her botched abortion? Like, couldn’t that wait until later? (“Nurse, we need 50 ccs of judgment, stat!”)

11. Speaking of waiting, shouldn’t Johnny have stayed with Penny to keep an eye on her that night, rather than boning Baby in the next room?

12. And let’s just ballpark it: How many women do you think scream on Johnny’s doorstep on an average night? I spy two right here: 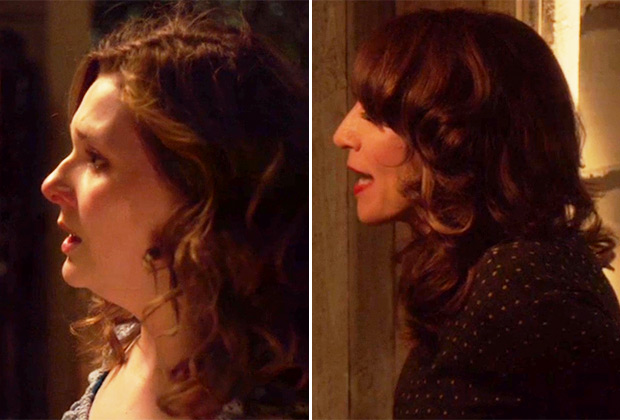 13. Dr. Houseman says he’s been distant with his wife because “When I lose a patient, I lose a little bit of my soul. I don’t want to burden you with that.” (How many patients does this guy lose on a daily basis?!)

14. When Baby tells Lisa that she slept with Johnny, Lisa responds, “Of all the guys here, why would you give yourself to him?” (Did I miss the part of the movie where they reveal that Lisa is blind?)

15. Why is Baby so surprised to discover that her dad can play the piano? It’s been pretty clearly established that everyone in this movie is musically inclined.

16. Before the talent show, Marjorie comforts Baby by telling her, “You didn’t commit a crime. You just fell in love.” (But didn’t she commit a crime earlier in the movie when she provided funds for Penny’s back-alley abortion?)

17. Did anyone else half-expect Marjorie and Dr. Houseman to also do the lift during that final group number?

18. What was the point of flashing forward to 1975? Just to show us that Baby and Johnny didn’t end up together, then to make us think maybe they had a child together — only to reveal that, no, they didn’t?

19. Wouldn’t this whole movie have been better if Breslin was playing Chanel No. 5? I’d argue that this whole thing is only slightly less ridiculous than the second season of Scream Queens.

20. If you were told that Breslin and Prattes filmed all of their scenes separately, you’d probably believe it, right?

21. Bonus question about that flash-forward at the end: Do I spy a poster for Kinky Boots, which opened on Broadway in 2013, exactly 38 years after this scene allegedly takes place? 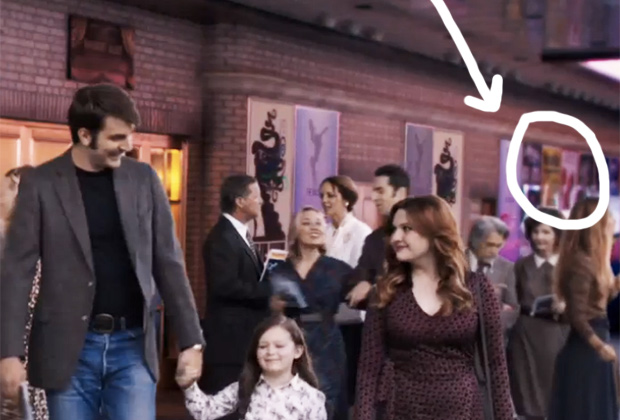 What are your burning questions after watching Dirty Dancing? Grade the remake below, then drop a comment with your (I assume) many thoughts.