The original Dirty Dancing was no paragon of cinematic excellence, but boy, does it look like Swan Lake next to The Hokey Pokey that is ABC’s remake of the 1987 film.

If you never saw the Patrick Swayze-Jennifer Grey version, you might like this made-for-TV movie. If you tend to enjoy watching minor characters in dramas get far more screen time than they deserve, you’ll probably be enthralled. And if you’ve ever watched Dancing With the Stars and thought, “You know, the best part about this show is how the dancers mouth the words to the songs during the numbers,” then you’ll love the event, which airs Wednesday, May 24, and which adds an unnecessary musical theater patina to the events of the original movie.

For the uninitiated: The story follows bookish Baby Houseman (played here by Scream Queens‘ Abigail Breslin) during the summer of 1963, when she and her family spend their vacation at a Catskills lodge called Kellerman’s. Baby becomes involved with one of the resort’s working-class dance instructors named Johnny Castle (dancer Colt Prattes), who teaches her mambos both vertical and horizontal. Their attraction is frowned upon by both her parents (Smash‘s Debra Messing and The People v O.J. Simpson‘s Bruce Greenwood) and the management at the conservative family hotel, yet Baby and Johnny still manage to have one heck of a love-affirming dance number before all is said and done.

Why yes, I was the exact perfect age in the late ’80s for the Patrick Swayze-Jennifer Grey hit to seem like the ultimate romantic coming-of-age tale. So happy you noticed! So of course I’ll judge any subsequent variations harshly. But part of what made the first movie so good — or, rather, so enjoyable — was its complete devotion to the Baby-Johnny storyline. The remake spends far too much time with the other members of the Houseman family, whose dramas are all very well and good — the parents are on the verge of divorce, Baby’s sister Lisa (Modern Family‘s Sarah Hyland) forges an interracial flirtation — but they don’t involve practicing lifts in a lake or nailing the gig at the Sheldrake, so who the hell cares, anyway? 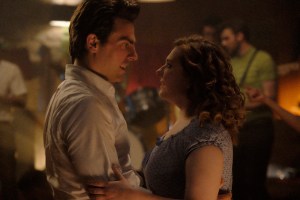 The project isn’t all bad. Breslin does an admirable job in the lead role. Her Baby is funny, cute, intelligent and engaging — which makes it even harder to believe that she’d fall for Prattes’ clod of a character. Where Swayze’s Johnny was rough-hewn and slightly dangerous, the TV-movie iteration of the character comes across as pretty dull anytime he’s not dancing. To paraphrase some dialogue from the original film, he’s mild. He’s miiiiiiiild!

The framing device the ABC version uses to bring us into and out of the story is so clunky, it’s not worth discussing. But here’s something that is: The first Dirty Dancing quickly establishes that there are people with money, and people with soul, and generally the two don’t mix. That allows Kellerman’s dancers to stand out as beautiful, if economically challenged, swans among the stodgy clientele; Baby crosses over thanks to a little lake water and Johnny’s sexy, sexy arms, and we revel in her transformation.

But in ABC’s Dirty Dancing, every single character glides about, capable of a fancy foxtrot or a perfect pirouette. So by the time Baby carries a watermelon (yep, that’s still in there) up to the staff hut, the dancers blowing off steam looks a lot like what’s going on in the main ballroom… albeit with a little more grinding. Add in the fact that the characters often break into song — like when Johnny sings The Contours’ “Do You Love Me?” on the night he and Baby first meet — and the whole endeavor feels like the Disney ride version of Dirty Dancing: cleaner, prettier and way frothier than the already frothy real thing.

THE TVLINE BOTTOM LINE: By adding unnecessary elements and turning Dirty Dancing into a musical, ABC proves that it wouldn’t know what made the original film special if it hit them in the pachanga.