Music City will have two new residents — one more welcome than the other — when Nashville‘s fifth season resumes on June 1 (9/8c).

As previously reported, Rachel Bilson (The O.C., Hart of Dixie) and Kaitlin Doubleday (Empire) will join the CMT drama for the second half of Season 5. TVLine got co-showrunner Marshall Herskovitz on the phone to preview both actresses’ debuts (and, of course, we slipped in a few questions about Deacon, Juliette and the rest of the gang). Read on for the scoop! 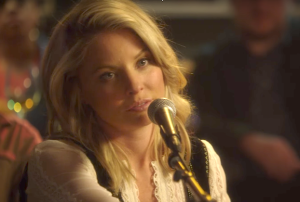 * Doubleday’s Jessie Caine, a singer/songwriter who left town after a big scandal years ago, will show up first, during the show’s milestone 100th episode on June 15. “She had a career and had a life, but it blew up in a way I can’t talk about” for fear of spoiling the story, Herskovitz says. She’s also got a son who was taken from her. “I find myself drawn to the struggle of someone who has made mistakes,” the EP adds, “who has flaws but it also determined to make her life work.”

* Bilson will play Silicon Valley transplant Alyssa Greene, whom Zach introduces as Highway 65’s chief strategy officer in the video at the top of this post. “One of the things that’s fun about what Rachel’s doing is, she plays someone who’s not from Nashville, doesn’t have any interest in or knowledge of country music. She’s a complete fish out of water, which is not something we’ve seen in the show very often,” Herskovitz says. Bilson will debut a few episodes after Doubleday does. 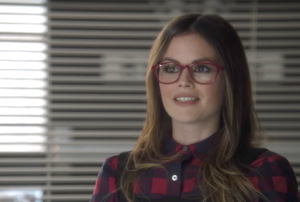 * Bilson’s addition, in particular, “is part of the storyline of how Deacon handles Highway 65 now that Rayna’s gone,” the EP adds. “He’s left in charge of it, and he’s the last person who ever wanted to run the business.” Look for Zach, played by the recently promoted Cameron Scoggins, to become more of an active partner in the business in the weeks ahead.

* Herskovitz previously mentioned that the midseason premiere would pick up after a small time jump. He confirms that the series hops ahead about 10 weeks from the events of Episode 11, and it examines how Deacon, Maddie and Daphne are conducting their lives after Rayna’s sudden passing. “What we see with them is the conflict between this relentless grief that you feel for someone who was such an important part of your life, and the fact that life must go on,” Herskovitz previews.

* A sneak peek video released in April hinted that the second part of the season would find Juliette gearing up for some live performances; Herskovitz confirms that Ms. Barnes is rarin’ to go. “A lot of her spirit, feistiness, impossibleness, whatever you want to call it is definitely going to return,” he says.

* But when the topic of pregnant Scarlett’s baby-daddy confusion arises, the EP jovially pleads the fifth. “I can assure you there is a father,” he says, laughing, declining to discuss the storyline further.

* Even without Connie Britton’s Rayna, Herskovitz assures, this is still the Nashville fans know and love. “There’s several OMG moments” in the back end of the season, he promises.

Press PLAY on the video above to see what’s coming up — and to get your first look at Bilson and Doubleday in action — then hit the comments with your thoughts!