When AMC’s Fear the Walking Dead returns for Season 3 (9/8c, Sunday, June 4), you may not recognize its core family.

Madison, Travis & Co. are still played by the same actors, of course. But “now they’ve been knocked around quite a bit,” showrunner Dave Erickson tells TVLine. “They went from the boat to the hacienda to the hotel, Nick went to the colonia, and what they’ve seen is that everything in this world is impermanent. Every time you try to get a hold on something, it goes away. So moving into the season, the group is far more assertive and stronger.”

Which makes them as formidable — and, ironically, as vulnerable — as Rick and their other counterparts on The Walking Dead. “Travis has become sort of the apocalyptic warrior,” Erickson previews. “He’s far more ruthless than we’ve seen him be before. And that’s going to ultimately compromise him and the family in ways that they didn’t anticipate. Having killed Andrés, Alicia has been knocked back a few steps… but starting around the fifth episode, she gets to a place where she becomes a bit harder and becomes more of an ally to her mother.”

Speaking of whom, in the wake of the dramatic two-hour premiere, Madison is “going to double down and abandon anything resembling mercy for a time,” the EP says. “For her, in this world, you have to sell a piece of your soul to survive. And as we move through the season, Nick and Alicia are going to see that and come to understand what drives her.” 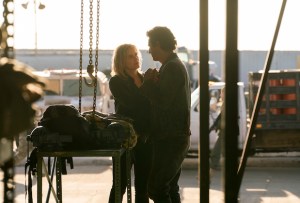 Early on, her focus will be on securing for the family a place among the survivalists at the Otto clan’s ranch — a neat trick, considering that among the new group are characters that are “incredibly dangerous and incredibly violent,” Erickson admits. “There is an ugliness that pervades this ranch and an ugliness in [patriarch] Jeremiah Otto [played by Deadwood’s Dayton Callie] and his youngest son, Troy [Teen Wolf alum Daniel Sharman].

“So it’s a somewhat tenuous existence for them,” he continues. “But they’re going to find a toehold and take control of their circumstances. The fundamental question is, how dirty are they willing to get?”

Apparently more than dirty enough. “Madison is going to suffer for some of the choices she makes,” Erickson teases. “Not to say we’re going to fragment our family again by the end of the season, but there’s going to be a tension between them that didn’t exist before, because of the things that they’re going to deal with over the first half of this season.”

So, are you looking forward to Season 3? Haters notwithstanding, hadn’t the show gotten pretty damn kickass by the conclusion of Season 2? Hit the comments.