On paper, it sounds simple: In Sunday’s episode of The Leftovers, Matt took off for Australia in hopes of returning Kevin to Miracle prior to the anniversary of the Sudden Departure. But in reality, the preacher’s endeavor was of course anything but simple, and came to involve a murder, a boatload of lion-worshiping sex fiends and a sit-down with God. And, let’s be honest, we fans of the HBO drama wouldn’t have had it any other way. Here’s how it all went down (under)…

‘NO LAW CAN GOVERN THE LIONESS’ | After an introduction in which we saw a fellow streak through a submarine in order to acrobatically unlock a safe and launch a nuclear missile, “It’s a Matt, Matt, Matt, Matt World” began with the reverend arriving at the home of a member of his congregation as the news was breaking on TV that the blast had destroyed an uninhabited island in the South Pacific. (This was also presumably the explosion that had kept Kevin from catching a cab at the end of “G’Day Melbourne.”) Though the mother of Matt’s parishioner was gravely ill, he still allowed the preacher to talk/bribe him into flying him and two companions — three wise men — to Oz in a cargo plane loaded with donated food in order to get around the fact that only foreign-aid planes were being cleared for landing. Thinking he was all set, Matt was put out to discover on the tarmac that John and Michael hadn’t come alone, they’d brought along Laurie, who was quick to remind the preacher that he only even knew where Kevin was because he’d called her. Furthermore, she added, rather than acknowledge her ex-husband’s mental illness, his supposed friend had written a book about it! Their arguing continued into the air, with the shrink insisting that she, not Matt, be the one to talk to Kevin when they found him.

That night, after Matt got a nosebleed and lied to Michael that he was taking pills for “allergies,” the pilot informed them that they weren’t being allowed to land in Melbourne, as planned, they were being rerouted to Tasmania. An 11-hour ferry ride to Melbourne wasn’t ideal for Matt’s purposes, but it was doable. Only the lone ferry departing that evening was fully booked for a private party. Approaching the lioness in charge in hopes of being allowed to hitch a ride, Matt was warned that there was going to be a lot of sinful sex going on — not to mention an actual lion in a cage. To make sure Matt could handle the debauchery, she challenged him to tell her “the filthiest joke that you know.” Laurie tried to intervene, but the lioness wasn’t accepting substitutions. And besides, Matt had this one in hand. “What’s the difference between a pimple and a priest?” he asked. “A pimple waits until you’re 12 to come on your face.” With that, Matt and his group were given one last warning — “When midnight comes, let no man mention [Frasier the Lion’s] name, lest that man become him” — and allowed to board. In spite of this theoretical break, things soon looked bleaker than ever for Matt. They weren’t going to make it back to Miracle in time for the 14th, John noted — and besides, they had no way of knowing if Kevin would even go with them. He has to, Matt argued, pointing out that Miracle had cured Mary and given him a son. It also cost John his wife and daughter, Erika’s ex noted. When Matt suffered another nosebleed, a crewman asked if God had hit him. Metaphorically? No, literally. God, the sailor explained, was up on deck. 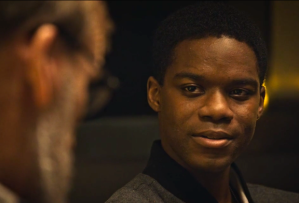 ‘I SAW WHAT YOU DID!’ | Approaching the man, a sorta grizzled, middle-aged chap, Matt asked, “I’m sorry to bother you, but are you telling people you’re God?” and was in response handed a card that read “yes.” Later, Matt was reading the back of the card, which answered some FAQs, like that the man had won bronze in the Olympics and was fine with being called Mr. Burton instead of God. Michael encouraged Matt to laugh it off as a joke. But “it’s blasphemy is what it is,” the reverend insisted. He was also resistant to Michael’s suggestion that he tell Laurie he’s sick. She helped John stop keeping in his feelings, the young man noted. Perhaps she could help Matt, too. Plus, “Matthew, John, Michael… they were all disciples… maybe Laurie’s one, too,” Michael theorized. When at last Matt did speak with Laurie, she revealed what she’d learned about Frasier: In the ’70s, a bunch of lionesses at a wild animal park had refused to mate with the males until Frasier — who’d have been in his 90s in lion years — was rescued from a circus and introduced to the group. In a single night, he’d had sex with every lioness and fathered 35 cubs. That was why this group was traveling with a lion — they were taking this Frasier stand-in around to let him spread his seed. Off this friendly moment, Laurie announced that they could play it Matt’s way with Kevin. After all, “you have a better story.” Then, she accidentally slipped and said that she knew Kevin had experienced hallucinations because Patti and Evie… Evie? Did Kevin see Evie? Matt understandably wanted to know. Yes, she admitted, but please don’t tell John. As soon as Laurie left Matt alone, he threw up — “allergies,” huh? — and spotted God throwing a man overboard. Matt cried out, but no one came. Inside, no one cared; the cat people were too busy getting busy. So Matt grabbed a life preserver and jumped into the water himself.

Upon being fished out, Matt was informed by the captain that, since it was a private party, the ferry had no record of who had been on board to see if anyone was missing. At least the captain was able to fill in some of the blanks regarding “God”: Burton had been a decathlete. He only became God after dying in a rock-climbing accident. His companion had dragged the body into a cave to keep it from dingos, but when he returned, Burton was right as rain… and convinced he was God. Later, as Matt lamented the fact that no one believed he’d witnessed a murder, John assured him that he did. Really? “Yeah, of course,” John said, prompting Matt to ask if he believed the same way he had “when I told you I didn’t molest my comatose wife”? Determined to get to the bottom of the mystery, Matt tried to obtain a guest list from the head lioness but quickly became so frustrated that he yelled that all any of them cared about was f—ing and Frasier. Oops. He’d said the name aloud after midnight. Now Matt had to become Frasier, which meant taking part in a sex ritual. Predictably, Matt wanted no part in that, and got booed upon breaking free and declaring the crowd “sick.” (Hey, was that the guy from the submarine in the group, or just someone who resembled him?) Outside, Matt followed God to the upper deck and, for his troubles, got a punch to the gut. While he recovered, one of the cat people approached to say that they weren’t all like the horndogs, and advised him to stay on the boat when they docked until it was safe. 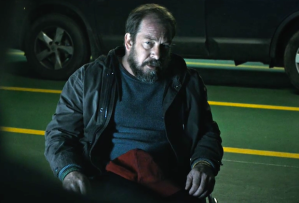 ‘WHAT HAPPENED TO YOUR WRATH?’ | Undaunted, Matt decided to forcibly compel Burton to confess. When John wanted no part of it, the preacher was surprised — was this the same John who used to burn down the homes of frauds? He found peace, Laurie said, prompting Matt to blurt out that Kevin told her he’d seen Evie. Only it wasn’t Evie, Laurie quickly noted. “I wouldn’t have told me, either,” John said. Having gotten nowhere, Matt excused himself, borrowed a wheelchair from the infirmary and an axe from the wall, and kidnapped God. After wheeling his captive down below, near the lion’s cage, Matt expressed mock shock that he wasn’t being struck down by lightning or anything. No need, God replied, because Matt would untie him when he’d gotten what he wanted. Which was? God’s attention. “Admit what you did,” Matt demanded. When God did as instructed, the preacher noted that Jesus didn’t get a mention on God’s FAQ card. That was because God was denying paternity — “Mary’s word vs. mine.” BTW, he added, Jesus “rotted in the cave,” it was his twin brother that people saw later and assumed was him. By and by, Matt grew angry that God didn’t seem to want to take responsibility for anything, not the extinction of the dinosaurs, not the plague… What about the Sudden Departure? “Yeah, that was me,” he said. But why?!? Clearly a Heathers fan, he answered, “Because I could.” God was gonna have to do better than that, Matt said. There had to be a reason, because Matt had done everything in his life for a reason — for him! God replied that Matt did everything that he’d done because he’d thought God was watching, judging. So ultimately, he’d done it all for himself, not God.

Shattered, Matt asked, “Is that why you’re killing me?” Subtly, God nodded. Still, Matt couldn’t understand. When he’d been sick as a boy, he’d prayed to be cured and had been. “Why is it back?” Instead of answer, God offered to save Matt again if only he’d untie him. When Matt did as he was told, God snapped his fingers and said, “Ta-da… you’re saved.” The next morning, as the ferry docked, the captain informed Matt that a fishing boat had found a body matching the description of the man he’d said Burton tossed into the drink. As such, the authorities had been called and would be picking up Burton as he went ashore. When Matt joined John, Michael and Laurie, she asked if he was OK. “Actually, Laurie,” he replied, “I’m dying.” At that, the catgirl who’d warned Matt to stay on the ferry released the lion, who wound up mauling Burton. “That’s the guy,” Matt said in conclusion, “I was telling you about.” So, what did you think of “It’s a Matt, Matt, Matt, Matt World”? Crazy, huh? Hit the comments.