When ABC cancelled The Catch Thursday, it effectively changed Ben and Alice’s fate from fun-and-kicky! to tragically unresolved.

The Season 2 finale — which now will serve as a series finale — ends with Ben hopping a private jet out of the country to avoid getting hauled in by the FBI (led by a very ticked-off Justine). And when Alice decides to stay behind, the pair promises to see each other as soon as possible, then she watches wistfully as Ben takes off for less-illegal pastures.

What we now know that Alice doesn’t: They’ll never — bar a wrap-up movie or something of the sort — see each other again.

But what brings us to that point? Who else is on the plane, and why? And who is really Mockingbird? Read on for the highlights of “The Mockingbird.”

KENSINGTON NO MORE | Margot’s meeting with “The Mockingbird” — whom we know is really Alice’s brother, Tommy — doesn’t go well: He’s basically allied with all the other crime families in the area, making her threats moot, and he gives her 24 hours to return his product or else. “You give me back my drugs, we’ll call it a deal,” he says in parting. “Or, you keep the drugs, and we’ll call it an act of war.”

When she meets up with Alice, Ben and Rhys, everyone blames everyone else for Felicity’s shooting of Sophie and kidnapping of Tessa. Ben suggests giving Felicity what she wants — the firm — but Margot alerts them to The Mockingbird’s hostile takeover, which basically means there is no more Kensington. When Felicity calls, they make a plan: They’ll meet her at a damn the next day.

HOSTAGE EXCHANGE | When Alice hears the plan, she rigs up a way that she and Val can watch and listen in on the meetup from a distance while Danny mans a sniper rifle, ready to take a shot when needed. But as Val works through all of the hotel info on Sophie’s laptop (Sophie’s ok, by the way), they realize that it’s all a set-up: Tessa and Felicity are working together.

Alice tells Ben as soon as she can via his earpiece, but he probably already guessed from the devilish way his daughter is grinning at him. “This is what Felicity and I had planned all along,” she says, ordering Ben, Margot and Rhys to come with them. So Alice sadly watches as her man rides away. 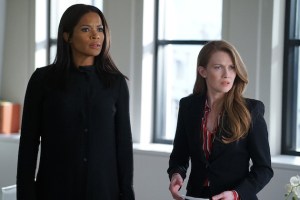 HI, TOMMY | Justine is apoplectic to hear everything that’s gone on, but the idea of bringing in Margot and The Mockingbird soon becomes quite attractive. With Ethan’s help, they enlist Carol (aka the woman who told them about The Mockingbird in the first place) to lure him out of his hiding place. (Side note: Carol’s question about a wardrobe budget, followed by the shot of her strutting in that sparkly jacket, was GOLD.)

Before they all head out to flip Mockingbird the bird, Ethan and Alice have a close moment. She gently makes it clear that she’s with Ben, “but I was going to spend the rest of my life with you,” she says. “I’m always gonna love you.” Ethan sadly responds that he’s not sure if that makes things better or worse.

And when the gang sees who The Mockingbird is… they’re incredulous. “He’s my idiot baby brother,” Alice tells Justine. But Tommy is still useful: Alice has him call Margot and set up another meeting, though Felicity assumes control and says she’s the new boss. Anyway, the conversation allows the team to figure out where Felicity and Tessa have everyone stashed.

While the calvary is en route, Ben manages to appeal to the better angels of Tessa’s nature, causing her to turn on Felicity. Too bad the tazing Margot gives Felicity doesn’t stick; the younger woman jumps up and shoots Rhys in the shoulder, then takes off after Tessa and Margot, who’ve made a run for it. But Felicity meets nothing more than Alice’s vengeful fist one she hits the hallway, and the FBI step in to take her into custody.

THE WORD ON THE BIRD | Tommy manages to slip out from under Danny’s watchful eye, but Ben and Alice track him down via his tailor. They know he’s not really The Mockingbird, but they’re not sure who is. But when credit cards link The Mockingbird to areas where Ben and the FBI have busted crime rings, it becomes clear that the elusive criminal is stepping in and filling a power vaccum that has allowed him to become very mighty. And the only person who would know about all of those opportunities is… Rhys.

Yep, Rhys is The Mockingbird. And when Tommy returns to the FBI, he offers to hand over Rhys’ operation in order to save Alice — whom Justine is convinced is somehow involved in everything — from prosecution.

HASTA LA VISTA! | Meanwhile, Margot and Tessa are about to board a private jet for parts unknown in order to escape the Feds. When Alice and Ethan show up, Ben learns that the plane (and the airport!) both belong to Ethan.

“I can’t compete with this guy,” Ben says. “You don’t have to,” Margot says, smirking. “She loves you, you idiot.”

When Rhys calls, Ben makes it clear that he’s going to see his kid and baby mama safe, then come for the traitor. Indeed, Ben wants to stay, but Alice convinces him that he’s got to go, too, because an angry Justine has deemed his deal with the FBI invalid. “If you get on that plane, I promise we will figure this out,” the redhead vows. He asks her to disappear with him, but she ruefully says she can’t… “Not yet.” And then all that’s left is the passionate kiss and the sad goodbye. Here’s lookin’ at you, kid!

Now it’s your turn. What did you think of the finale? Grade the episode via the poll below, then hit the comments with your thoughts!