In college, I used to roll my eyes when my good friend, Courtney, welled up while watching NBC’s critically acclaimed White House drama The West Wing.

“Are you crying because something happened, or are you just crying because of America?” I’d ask sarcastically. I was a casual viewer, and usually hadn’t paid much attention to what President Bartlet and his team were up to on any given week. 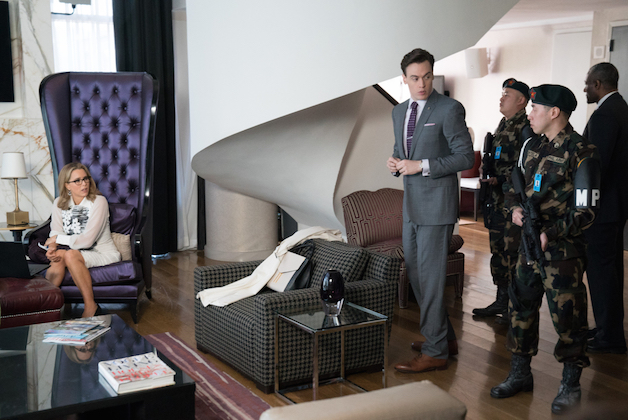 “America!” she’d respond, dabbing at her eyes and laughing. I laughed, too, because — even while in the thrall of a brilliantly written, expertly acted TV series — who gets all sappy over political footballs like healthcare and the national debt ceiling?

Cut to 16 years later. This past Sunday night, in fact. Witness me trying to hold it together while Madam Secretary‘s Elizabeth McCord watched a wrongly imprisoned, recently freed American journalist reconnect with his family for the first time in years.

Who cries at uplifting political dramas? In this age of Muslim bans, Mexican walls and pregnancy as a pre-existing condition, I do.

All I can say is: Thank goodness for the CBS drama, which has picked up The West Wing‘s mantle of believing in the best parts of American exceptionalism. Téa Leoni’s character, the titular government official, is a smart and savvy — and above all, not jaded — believer in the good that her country can do in the world. And she fuels my hope that I can feel that way about the United States, too, even though my national pride has taken a beating in the last year or so.

If you’ve never seen an episode of the series, now in its third season, let me quickly fill you in. Elizabeth is a former CIA analyst and college professor who reluctantly accepted the Secretary of State gig when her former colleague, Conrad Dalton, needed her to. She’s married to Tim Daly’s Henry, himself a religion-and-philosophy professor who now works with the National Security Agency. 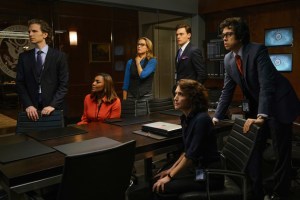 As I’ve said before (and as recently as earlier today), I could fill a dossier with how much I love Mr. and Mrs. McCord’s mature, sexy, intelligent, respectful, fun on-screen relationship and the way they raise their three kids. But for the sake of my argument, let’s just focus on this: Elizabeth and Henry are morally and ethically upright creatures who struggle mightily with some of the planet’s toughest problems yet somehow make the right decisions when it matters most.

And when Elizabeth has to deal with a power-hungry Russian president… or figure out who stole uranium in Eastern Europe… or weigh how schooling the newly elected leader of an Asian country for his misogynistic tendencies will affect his participation in an important treaty… or — as she did in Sunday’s episode — track down the country really responsible for an ailing reporter’s unjust incarceration, you can rest easy in the notion that she’s doing so in a way that’s good for the American people as well as forAmerica as a whole.

I would be remiss if I didn’t mention Elizabeth’s staff, who — like West Wing‘s Sam Seaborn & Co. — frequently do the heavy lifting and detailed legwork for whatever international crisis or diplomatic quandary comes her way. They are sharp, dedicated workaholics (played by Erich Bergen, Patina Miller, Sebastian Arcelus, Geoffrey Arend and Bebe Neuwirth) who are so good at their jobs because they care so damn much. It’s inspiring.

Sec. McCord’s support team also often bears the burden of the primetime drama’s less-believable storylines; Miller’s Daisy, for instance, is now pregnant thanks to a fledgling relationship with an undercover CIA agent who was murdered before their romance really got underway. Absurd? Kinda. But the performances are so good — Elizabeth’s reassuring reaction to her press coordinator’s impending motherhood, for instance — you just kinda roll with it.

One last note: Just in case the words “liberal” and “snowflake” have crossed your mind in the last few minutes, you should know that Madam Secretary has never once declared whether President Dalton’s administration — and Elizabeth, by extension — is Republican or Democrat. The show’s decision not to affiliate with either party was a “kicky idea” in the beginning, Leoni told CBS News in 2015. “It’s become something more interesting than that now, to me, because I think on [Capitol] Hill, there’s such polarization.”

Translation: Madam Secretary is not a Democratic thing or a Republican thing. It is an American thing, a soothing balm when your faith in the country and its leaders is scraped-up and raw.

Somewhere, perhaps in his presidential library, Jed Bartlet is smiling.