Nora Durst, how could you?

In Sunday’s The Leftovers, Carrie Coon’s wounded yet resilient heroine embarked on something of a wild goose chase in search of her Departed husband and children, completely icing out current love Kevin (Justin Theroux) in the process (read full episode recap here).

As a longtime acolyte of the Kevin-Nora relationship, it was difficult to sit back and watch her emotionally and physically detach from her life partner (and, as far as I’m concerned, soul mate) as she pursued this Mark Linn-Baker-fueled fantasy. Intellectually, I (mostly) understood why she needed to untether herself from Kevin. But viscerally? It sucked.

And at one point, it nearly destroyed me.

That moment occurred at the airport when Australia-bound Nora abandoned Kevin on the security line because she had Global Entry status. I don’t care what kind of turmoil your relationship is facing. I don’t care what you’re smuggling. You just don’t do that! One of the unspoken rules of couplehood is that if you are going on a trip together, you stick together during the roughest part of that journey: the airport security line. And the rules don’t change during an apocalypse. Nor are they lifted when one half of the couple is sneaking $20,000 into a foreign country (something Nora could’ve looped Kevin in on at home before they left for the airport, thus avoiding all of this ugliness to begin with!) 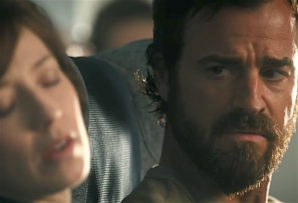 I formally registered my grievance with series co-creator Damon Lindelof and Coon herself last month shortly after I first screened the episode. They basically took Nora’s side, and suggested that my beef with her insensitive actions says more about my own airport baggage than it does about her (and, ugh, they’re probably right).

“Kevin and Nora are not married for a reason,” Lindelof argued. “The story is very purposefully articulating that they haven’t gone all the way. And the idea that she is willing to ditch him to go through Global Entry is… look at where that episode ends. It never even occurred to her to think of them as a unit.”

Coon, meanwhile, reminded me that Nora remains a complete basket case. “When you think of the tremendous loss that she’s suffered and you think of the tantalizing possibility that’s being dangled in front of her, the only way she can consider that path is by distancing herself from everyone she is close to,” she explained. “Or she can’t take that path. And she’s clearly taking that path. She’s very myopic about that. And she’s not taking his needs into consideration.”

The actress also makes the case that the victim in this case — Kevin — is equally culpable. “Kevin is keeping secrets, too,” she noted. “He’s not revealing to her what his coping mechanisms have evolved into. They are not talking to each other. And it takes two to tango when it comes to that.”

Conversely, Coon also suggested we should not minimize the role Nora’s suspicious-looking cargo played in her decision to make a fast break for the Global Entry line. “She doesn’t want to implicate him if it goes wrong,” she posited. “You could think of it as her being protective of him.”

What do you think? Did you understand/Could you defend why Nora did what she did?