Fact: Only on The Originals could you watch a grown man coerce a seven-year-old girl into bringing him a bag of blood and think, “You know, this scene is actually kind of sweet.”

Then again, there was an undeniable charm about the way Hope interacted with Marcel during her visit to his new abode on Friday’s episode. Powerful as she may be — and she’s happy to remind you, in case you forget — Hope is way too innocent to comprehend the bad blood between her father and the boy he once loved like a son. Truth be told, I could actually see Marcel evolve into more of an uncle figure than Elijah.

Little did Marcel know, Freya and Josh were busy using his likeness to trap Dominic (and maybe also to enjoy #datbody, for which I pass no judgment). But their plan was foiled when Dom — can I call him Dom? — got the upper hand against an overzealous Freya, knocking her out and storming the Mikaelsons’ no-longer-secure compound.

And once the dust had settled from the Originals’ latest melee, Freya stumbled upon the kind of the discovery that crossovers are made of: Dominic had tracked one of the bones needed to summon the Hollow to a line of werewolves that recently ended when its last-known member was mysteriously killed. And who is that member, you ask? Why, none other than everyone’s favorite hybrid dick, Tyler Lockwood! (Alaric’s visit in next week’s episode suddenly makes a lot more sense.) 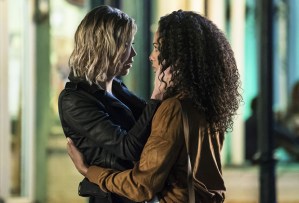 * Even though we knew it was coming, how perfect was that long-awaited kiss between Freya and Keelin? Like, putting aside the couple’s Beauty and the (Also Beautiful) Beast-style beginnings, there’s no denying the feelings they have for one another. “You make me feel understood — known,” Keelin told her. “There’s always going to be a spell to do or an enemy to fight, but when all that’s finished, you deserve someone that gets you.” (These two have the potential to de-throne Supergirl‘s Alex and Maggie as The CW’s reigning lesbian queens, I’m just saying.)

* On a less enjoyable note, Elijah and Vincent got up to some really messed up stuff in a graveyard this week. When the ancestors refused to help them in their fight against the Hollow — no shocker there — they turned to Davina, appointing her the official gatekeeper for all of the town’s magic. If that doesn’t sound messed up to you, perhaps you’re overlooking the four young witches who nearly lost their lives in the process. Not to mention all the blood secreted from Elijah and Vincent’s eye sockets. Blech.

* And then there’s Sofya, who was mercifully released from her blade-induced hell at the end of the hour… just in time to be possessed by the Hollow. (Speaking of the Hollow, how does it manage to keep getting creepier? I haven’t been that unsettled by a little girl since I saw The Ring.)

Your thoughts on this week’s episode? Who are you more excited to see next week, Davina or Alaric? Whatever’s on your mind, drop it in a comment below.