Two months after The Vampire Diaries‘ series finale, one of Mystic Falls’ finest is making his way to the Big Easy.

As TVLine previously reported, TVD vet Matt Davis will guest-star in the May 12 episode of The Originals (The CW, 8/7c). And now, we’ve got your exclusive first look at his meeting with the two most important women in Klaus’ life: 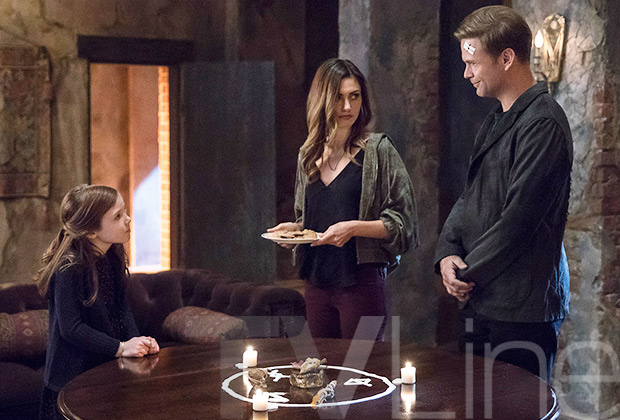 Following the Vampire Diaries finale — during which Caroline and Alaric’s new school for supernatural kids received a sizable donation from Klaus — TVLine spoke with TVD showrunner Julie Plec, who told us that Alaric’s trip to New Orleans “falls probably more in line with the timeline of that last scene with [Klaus’] letter.”

“In fact, Alaric is the one who shows up and actually tells Klaus about the school,” Plec said. “The idea of the school as a safe haven for young supernatural beings certainly has a lot of relevance for Hope Mikaelson.”

So it should come as no surprise that our first-look photo finds Alaric meeting the youngest member of the Mikaelson clan. (The question is: Will she also become the newest student at Alaric and Caroline’s school?)

Additionally, according to the episode’s official synopsis, Alaric brings along a “crucial artifact that could help in [the Mikaelsons’] fight against the Hollow.”

Drink that photo in, then drop a comment with your thoughts below.