Warning: The following recap contains major spoilers from Thursday’s Superstore. Proceed at your own risk.

In Superstore‘s Season 2 finale, Cloud 9 is destroyed by a massive tornado, and the only person to blame… is Lisa Rinna.

Midway through “Tornado,” a customer gets his hands on a universal remote controlling all of the TVs in Cloud 9’s electronics department. He begins to flip past wall-to-wall breaking news coverage, all of which warns of the approaching storm, before ultimately landing on the Home Shopping Network, which is advertising the Real Housewife’s line of fringe cardigans.

As such, no one in the store seems to be aware that a tornado is about to touch down. To be fair,  nearly everyone is distracted by the prospect of layoffs, while Jonah is freaking out about that awkward moment with Amy. Let’s recap:

BRINGING “SEXY” BACK | Jonah confides in Garrett about referring to Amy as “sexy” at Cheyenne and Bo’s wedding — which turns out to be a bad idea. “Why would you use that word?” Garrett asks, to which Jonah argues that “lots of people” use it. “Oh yeah, sure, tons of people,” Garrett says sarcastically, “like hilarious gay teenagers, Gloria Estefan, cartoon skunks… that’s about it.” And so Jonah makes it his mission to bring “sexy” back, using it in situations where it should absolutely, 100-percent not be used. First, he tells new hire Alisha that she, too, is sexy while standing in earshot of Amy; later, he makes a storewide announcement to alert the owner of a “beige, sexy Cabriolet” that the car’s lights were left on in the parking lot.

Jonah and Amy eventually take cover in the pharmacy as they prepare for the brunt of the storm. Amy attempts to make a “sexy” joke to put Jonah at ease, but it’s she who eventually needs him to make her feel better once they realize a tornado is about to tear through the store. After he shields her from a piece of falling debris, she looks directly into his eyes and kisses him. (Yay!)

Once the storm passes, Amy thanks Jonah for comforting her — but then proceeds to leave with Adam and Emma. (Nooooooooo!) A seemingly bummed Jonah then asks Mateo and Marcus if they’d like to join him for a drink.

GOOD LORD | Glenn spends much of the episode hesitant to follow through with the layoffs, but winds up firing six employees, including Justine and Marcus. Unfortunately, his timing couldn’t be much worse: Moments after dropping the ax, Glenn is forced to hunker down with the fired associates as the storm proves much more intense than expected. He then makes an effort to pray the twister away, calling on a plethora of gods to keep him and everyone else safe. His prayers are ultimately answered (or so he thinks) after he pleads his case to Allah. (“Thank you Allah?”) 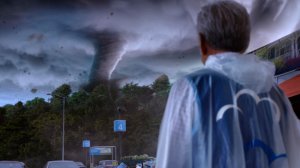 After the store is evacuated, Dina takes a roll call to make sure everyone is OK, but Brett — whom we last saw outside as the twister approached Cloud 9 — is nowhere to be found. Yikes!

* Garrett, who is clearly developing feelings for Dina, gets angry at her for not seeming at all worried about the prospect of his getting fired. Making matters worse, she eventually opts to flip a coin when deciding whether to give him or Alicia a protective helmet to wear during the storm. After telling her that he feels an emotional attachment to her, Dina makes it a point to tell Garrett that she’s glad he made it out alive.

* Worried he’ll die miserable and alone, Mateo — who somehow still has cell reception – calls Jeff during the natural disaster to tell him that he still loves him.

* Carol, who is upset with Sandra about the whole Jerry situation, leaves a message with Jerry saying that Sandra has passed on STDs to at least 10 men. To get back at her, Sandra refuses to help Carol when it comes time to take cover during the storm. (If you care, Carol made it out alive.)

Have at it, TVLiners: How are you feeling about Jonah and Amy after that big kiss? And is Brett, ya know, dead? Grade the episode via our poll, then chime in below.