Are Superstore‘s Jonah and Amy officially in the express checkout lane to coupledom?

Towards the end of “Cheyenne’s Wedding,” the second-to-last episode of Season 2, a slightly drunk Jonah attempted to comfort Amy once she realized that her marriage to Adam was probably over. It was during this pep talk that Jonah let it slip that he finds his coworker sexy.

Jonah’s bout of TMI came after he spent the entirety of Cheyenne and Bo’s wedding feeling uncomfortable about being labeled Amy’s work husband in front of Adam and Kristen. (Kristen wound up dumping Jonah after he went so far as to ask her to move in with him in an ill-fated bid to change the subject.) The festivities also made Amy tense, having come to the realization that much like Cheyenne agreeing to wed Bo, she only ever married Adam because he was the father of her child. This resulted in an impromptu wedding toast, during which she detailed the highs and many lows of marriage and pretty much admitted that hers was a mistake. 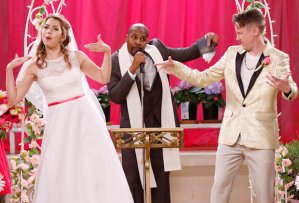 As for Cheyenne and Bo’s aforementioned nuptials, the event was as delightfully tacky as you’d imagine. After staging it to look like Bo was dumping his baby mamma at the altar, it was revealed that it was all part of an act so the mustached buffoon could lay down some (sick?) rhymes with wedding officiator Reverend Funkacon. (Yes, really.) But perhaps best of all was Garrett getting Myrtle to believe that this was a lesbian wedding, and Bo was in fact a woman.

* In an attempt to prevent the layoffs we learned about at the end of last week’s episode, Glenn invited Jeff to the reception. His plan? Introduce the district manager to some of the Cloud 9 associates who are “right on the poverty line,” and he’ll be forced to call off firing anyone. Once that backfired, Glenn grabbed a microphone and begged Jeff not to make him fire his family, thus revealing to all of his employees that their jobs were in danger.

* Dina insisted on being a part of Cheyenne’s bridal party, then proceeded to be the absolute worst bridesmaid ever. Not only did she give an unwanted toast that featured one too many d–k jokes, but she later rejected Cheyenne’s gift and asked for the cash instead.

* Sandra’s crush Jerry (who we first met in “Ladies’ Lunch”) turned up as Carol’s date. After Sandra cleared up the fact that she never actually had a boyfriend named Jeff, and Jerry realized how much he and Sandra had in common (they are both susceptible to Internet clickbait), he returned to the reception sans Carol and asked if it would be OK to kiss her. (Aww!)

What did you think of Superstore‘s penultimate Season 2 episode? And more importantly, do you think it’s time for Jonah and Amy to get together? Weigh in via the poll below, then back up your choice in the comments.