After a season full of dead ends and red herrings, Riverdale finally revealed who killed Jason Blossom this week. But of course, they tossed a few more curveballs (and dead bodies) our way first.

It’s still homecoming night, and Jughead’s dad F.P. is under arrest for Jason’s murder. Back at Archie’s house, he and Veronica tell their parents they know F.P. is innocent, because someone planted the murder weapon in his trailer. The parents don’t believe them, though, and Mary — she’s a lawyer, by the way — says Archie’s testimony wouldn’t be admissible anyway. Meanwhile, Jughead has gone AWOL: He heads to the bus station and calls his mom, hoping to come see her and Jellybean in Toledo. But she tells him that’s not such a good idea. Gee, thanks, Mom.

Archie and Betty find Jughead slumped in a booth at Pop’s, nearly catatonic. He perks up, though, when Veronica tells him about the planted gun. So his dad is innocent, right? Well, maybe not: Back at the police station, Sheriff Keller questions F.P. about Jason, and F.P. tells him about paying Jason to do that drug delivery for him. But then he says he took Jason hostage in hopes of scoring a big fat ransom from the Blossoms, and when he tried to escape… F.P. shot him. He’s confessing! He admits to stealing the sheriff’s files and torching the getaway car, too.

News of his confession spreads like wildfire, which turns Jughead into a pariah at school. He tries to apologize to Cheryl, but she just slaps him across the face. Betty still thinks F.P. didn’t do it, but Jughead is tired of sticking up for his dad: “I’ve been waiting my whole life for that man to do the right thing… I’m done.” Polly does seem surprised when she sees F.P.’s mugshot on the front page, though: “He killed Jason, not…?” (Dammit, Polly, what do you know??) 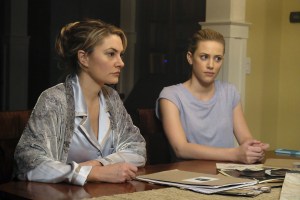 Then the complications start piling up: Betty and Alice catch Hal sneaking into their home to destroy evidence — namely, the murder-board files he stole from Sheriff Keller’s house on drive-in night. But didn’t F.P. just confess to that? Hal says he did it to protect Polly, because (hold on to your butts) their great-grandfather that was murdered by a Blossom… was a Blossom. The Coopers were Blossoms! They split away and took a new name after that murder, but that still means: Polly and Jason are related. So that’s why Hal tried to keep them apart. (He’s not just a dick!) They rush right over to Thorn Hill to rescue Polly from that insane asylum.

Meanwhile, Jughead visits his dad in jail, pouring his heart out about how he was fooled by F.P.’s faux “redemption.” F.P. is only sorry he got caught, though, and yells at Jughead to never come see him again. But Jughead knows his dad too well; he calls Betty right after and tells her, “You were right. He’s hiding something.” They take another long look at their murder board and rule out everybody except Hiram… and Cliff and Penelope Blossom.

When the gang learns that F.P. made his one prison phone call to Joaquin, they confront him, and he admits that F.P. called him back in July to do a “clean-up job”: to stash Jason’s dead body in the freezer. Joaquin assumed F.P. killed him, but he gives them the name of another Serpent: Mustang, the tough guy who fought Archie when he went to the biker bar. They track Mustang down in a seedy motel room — dead in the bathtub of an overdose. 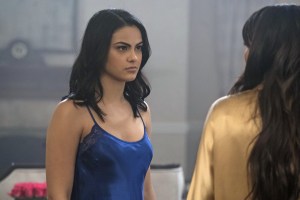 The cops find Hiram’s bag of cash in Mustang’s room, and everyone connects the dots and assumes Veronica’s dad paid F.P. and Mustang to off Jason. Mystery solved, right? Well, not exactly: Joaquin directs Betty and Jughead to F.P.’s “contingency plan,” i.e. that bag with Jason’s letterman jacket in it. Still seems incriminating, but Betty searches the jacket and finds a USB drive in the lining. They pop that baby into a laptop and watch the video file on it. We can’t see the video — just their shocked reactions. But it sure looks like the smoking gun we’ve been waiting all season for.

Betty immediately calls Cheryl (!) and tells her she needs to get out of that house. Cheryl calmly walks downstairs and looks Cliff right in the eye: “You did a bad thing, Daddy… and now everyone knows.” Yep, the video shows Jason tied up in the biker bar’s basement, like F.P. said… only Cliff walks in, takes the Blossom family ring back from his son, and then shoots him right between the eyes. Whodunit? Cliff Blossom dun it!

F.P. only confessed because Cliff threatened to do the same thing to Jughead if he didn’t. So the cops head for Thorn Hill, where Cheryl and Penelope point them towards a barn full of maple-syrup barrels — where Cliff is hanging dead from a noose. But why did Cliff kill his own son? We may get a hint when the cops knock over one of the syrup barrels… and bundles of drugs spill out. So that’s why the maple-syrup business is so lucrative.

Did you have Cliff Blossom in your Riverdale killer pool? Drop your thoughts on the big reveal in a comment below.