Hoo boy… a whole bunch of chickens came home to roost in Riverdale‘s homecoming episode. And when the dust settled, we got ourselves a new arrest in the Jason Blossom case.

Jughead returns home to F.P.’s trailer and is happy to see his dad has cleaned the place up. F.P. even took the time to read Jughead’s manuscript! But he starts asking a lot of questions about Jason Blossom’s death before recommending that Jughead “move on” from the case. Hmmm. Alice is suspicious of F.P., too, and tells Betty and Veronica she wants to question him about Jason. Betty refuses to go along, since she trusts Jughead, and Jughead trusts his dad — but Veronica stays behind after Betty leaves to offer Alice her help.

Alice’s plan: Invite F.P. over for dinner before the homecoming dance and keep him busy while Veronica searches his trailer for evidence. Even though Betty instantly sees through her dinner scheme, Jughead likes the idea of their families getting to know each other. (Alice even baked a peach pie!) At dinner, she starts to grill F.P. about his shady past, but she’s interrupted when Betty’s dad Hal unexpectedly shows up. That leads to F.P. remembering an old school dance where he overheard Alice and Hal fighting about what sounded like “life or death.” (Was that maybe about the abortion Alice says Hal pushed on her?) 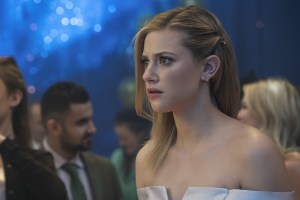 While all that’s going on, Veronica enlists Archie to help her comb through F.P.’s trailer. They don’t find anything incriminating, but Ronnie keeps pushing: “I want to know!” Basically, this boils down to her believing her dad Hiram may have hired F.P. to off Jason to get back at the Blossoms. But Archie reassures her it’s a good sign they didn’t find anything, and they head to the dance to report their findings to Alice… which Betty notices. (With a real Dark Betty look on her face, it should be noted.)

Betty confronts Archie and Veronica about why they’re scheming with her mom — just as Sheriff Keller is raiding F.P.’s trailer with a search warrant. While Archie and Ronnie tell Betty what they were doing, Jughead wanders by, clueless. Now he thinks Betty invited him and his dad to that pre-dance dinner as a set-up. Betty claims she didn’t know, but Jughead still thinks they all lied to him. Then Kevin bursts in with the bad news: They found a gun in F.P.’s trailer, and now F.P. is under arrest for Jason’s murder.

Jughead is devastated, running back to the trailer in tears and smashing up the place, remembering his dad saying, “I’m no killer.” Alice tries to tell Betty she didn’t tip off the cops, but Betty’s not having it: “Do not push me tonight, Mom… because I will push back.” But Archie and Veronica track down Betty at Pop’s with some important news: That gun that Sheriff Keller found at F.P.’s? It wasn’t there when they searched the place. So maybe F.P. was telling Jughead the truth after all…

And yes, a whole lot more happened this week in “To Riverdale and Back Again”: 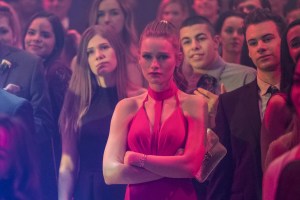 A MILKSHAKE A DAY… | I just love the Blossom family, don’t you? They’re Riverdale at its weirdest and most fun. Pregnant Polly is still staying at Thorn Hill and wandering the halls, snooping around for clues about Jason. She stumbles upon Cheryl’s dad Cliff sporting white hair next to a row of redheaded wigs. Gasp! He’s not a true ginger! That leads to Penelope giving Polly a stern warning as she serves Polly her “daily milkshake” (!): The East Wing, including the Blossoms’ master bedroom, is “out of bounds.”

Cheryl wants to bring Polly to the homecoming dance as her date, in hopes of winning homecoming co-queens together as a tribute to Jason. (Um, OK.) Polly suggests they borrow some of Penelope’s “vintage bling” as a way to get inside the East Wing. There, they find the family heirloom ring Jason proposed to Polly with. Penelope says Jason threw that ring in Cliff’s face when he walked out on the family. Polly wants to keep it, but the Blossoms don’t seem eager to let it out of their sight.

The night of the dance, Cheryl gets ready to escort Polly… but the girl is passed out cold. Penelope says she slipped an “all-natural relaxer” into her milkshake to calm her down — and asks Cheryl about the ring. But Cheryl claims she already flushed it down the drain. Later, when news hits of F.P.’s arrest, Penelope cries, “I want him dead for what he did!” And Cliff swears to make that happen. Plus, we see that Cheryl’s still clutching that ring. (Duh. Cheryl’s too smart to flush away a valuable bargaining chip like that.)

* You know this was a busy episode when Molly Freaking Ringwald gets bumped down to this section. She made her first full appearance as Archie’s mom Mary and joined Fred and Hermione at the homecoming dance. (Another Riverdale throuple!) But she also tells Archie that Riverdale isn’t safe anymore, and she wants him to move back to Chicago with her. Oh no… Archie wouldn’t leave his pals, would he?

* Archie and Veronica had a moment at Jughead’s birthday party, but that moment seems to be over. She told Archie she doesn’t have the “bandwidth” for a relationship right now. (Ouch. Harsh.) But they did have good chemistry when they performed a cover of Kim Wildes’ “Kids in America” at the dance. Hey, at least it wasn’t the usual “make you want to slit your wrists” music Archie plays!

* Veronica is convinced her dad Hiram is involved in Jason’s death because he had a grudge against the Blossoms and that gives him “motive.” But… so? Motive isn’t evidence. Not sure why Veronica’s freaking out so much, unless the writers just want an excuse to tie her into the murder plot.

* Alice told Betty and Veronica in the school newspaper office, “Whoever is not in this room is on the table as a possible suspect” in Jason’s murder. But have we really ruled out the people in that room? Alice has some big ol’ red flags, and I’m still keeping an eye on Dark Betty and her convenient blackouts.

* Gotta say, the prospect of a “daily milkshake” makes being pregnant sound pretty sweet… even if that shake is drugged.