Birthday parties are lots of fun, right? Well, not on Riverdale, where they just lead to bitter arguments, problem drinking and uncomfortable secrets being revealed. 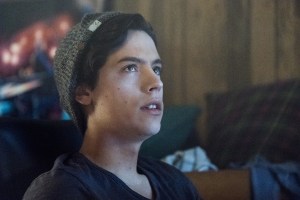 It’s Jughead’s birthday, but he doesn’t want anyone to know about it: He’s happy to celebrate by catching a double feature at the Bijou. Archie usually joins him, but this year, he suggests to Betty that she step in. She didn’t even know it was Jughead’s birthday, so she wants to throw him a surprise party. She even invites his dad F.P., and after he politely declines, she shows up at Fred’s work site to insist. F.P. laughs: “You don’t quit, do you?” No, she certainly does not!

Betty’s mood darkens, though, when she sees Chuck — the sexist football jerk she almost drowned in a hot tub — back at school after his suspension. She tries to get him to leave Ethel alone, but he just laughs her off and asks if she’s about to go “Dark Betty” on him again. (He actually says “Dark Betty,” so it’s not just us calling her that!) Betty holds it together on the surface… but she tightens her fists so tight, she leaves red marks on her palms. Again, Chuck, Betty Cooper does not quit.

Archie is bummed out because Fred is out of town finalizing his divorce from Archie’s mom Mary. (It’s been two years since she moved out, we learn.) It’s gotten so ugly that they can’t even meet without lawyers present, and hearing that sends Archie straight to Fred’s liquor stash. Not our innocent Archie! Plus, Veronica shows up Cheryl at cheer practice, beating her in a dance-off to claim the title of head cheerleader. This infuriates Cheryl, who heads to Pop’s and finds an ally in mischief in Chuck: “Wanna team up for a little destruction?” 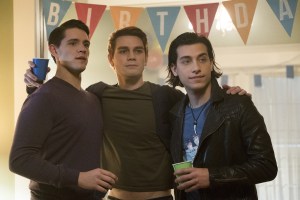 While Betty distracts Jughead with a birthday matinee of An American Werewolf in London, Archie and Veronica set up for his surprise party. And Ronnie has her own problems: Her dad Hiram wants her to make a statement on his behalf at his embezzlement trial — and warns that if she doesn’t, Hermione might be in danger, too. So by the time Betty and Jughead show up to the party, Archie reeks of booze, and Veronica is sobbing in the kitchen. Good times!

Cheryl and Chuck show up to crash the party, bringing a couple of kegs and dozens of classmates with them. The party begins to rage, with a shirtless (of course) Archie drinking and dancing his cares away. But Jughead hides out alone in the garage; he’d rather not be “in the middle of a Seth Rogen movie.” F.P. does come by — with a gift and everything! Kevin’s boyfriend Joaquin pulls him aside, though, to share what he overheard when Veronica was complaining about Hiram. And across the street, Alice Cooper is peering in with binoculars. She is the head of the neighborhood watch, after all.

Betty finds Jughead in the garage, and he unloads on her, wondering why she would even think he would want a party: “I’m a weirdo… I don’t want to fit in.” Then he gets mean, accusing her of “slumming” with him while she waits for Archie to change his mind about her. (Ouch.) Things get worse when Cheryl kicks off a game of “Secrets and Sins,” which apparently involves picking a person you don’t like and putting them on blast for all of their misdeeds. Veronica makes fun of Cheryl’s “twincest,” Dilton spills about Archie’s affair with Miss Grundy and Chuck reveals his hot-tub moment with “Dark Betty.” That last one leads to an already-pissed Jughead taking a swing at Chuck.

F.P. breaks up the fight and kicks everyone out of the house. (Same time next year, guys?) Back at Pop’s, Jughead apologizes to Betty: “When people do nice things for me, I short-circuit.” She apologizes for not telling him about the whole Chuck debacle: “There’s this darkness in me that’s overwhelming sometimes.” She shows him the red marks on her palms, and he kisses them. Aw! Aren’t we all rooting for this sweet (and weird) couple? Speaking of couples: Archie and Veronica share their miseries after the party, and end up making out. Quick, what’s their shipper name? Archonica? 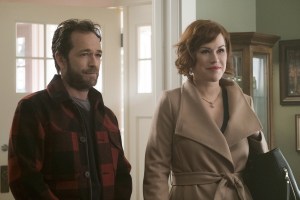 Veronica wakes up in Archie’s bed, but nothing happened: He slept on the floor (shirtless, of course). Jughead sees her sneaking out, and promises that his “lips are sealed.” After a chat with family butler Smithers, Ronnie decides to testify on her dad’s behalf — and gets a fresh necklace of pearls from Hiram as a thank-you. And Fred arrives back at home… with Archie’s mom Mary! Oh hi, Molly Ringwald!

* Seriously, though, how does Betty not know when Jughead’s birthday is? Not only is he her boyfriend, but they’ve known each other since they were kids. They never celebrated his birthday in elementary school? Not believable, Riverdale.

* Veronica also dug up a series of payments from the Blossoms to her dad’s company that date back 75 years, and that stopped when Hiram went to jail. So does that give Hiram a motive to hire someone to off the Blossom heir apparent?

* Betty told Jughead at their Werewolf matinee: “I’m all about the beast within.” She wasn’t kidding, was she? Is there a chance she’s involved with Jason’s death and just doesn’t remember because she blacked out, “Dark Betty”-style?

* That scene between F.P. and Alice when the party broke up was a fun little glimpse into their shared past. F.P. revealed that Alice used to live on the south side… and he still thinks she’s hot. Hey, she might be single soon!

* Had to giggle when Jughead reacted to Betty’s sweet (but odd) rendition of “Happy Birthday” with a deadpan “That was haunting, Betty.”