Heaven help him, Alex squared off in Thursday’s Grey’s Anatomy against not only a couple of religious zealots who preferred to watch their son die than allow him to receive medical treatment but also Eliza, who supported the parents’ right to murder the kid through inaction. On top of that, he came one step closer to losing Jo for good when Andrew began to get antsy about his unexpressed feelings for her. How did it all play out? Read on…

‘YOU WANT TO LET THAT GO’ | Early on in “Leave It Inside,” Meredith — cleaning at 3:30 a.m. — offered Amelia the giant tumor that Derek had drawn her. (All the better to prep her bedroom for a visit from Nathan.) At the hospital, Grey then asked Maggie if she’d be home that night as she was thinking of having Riggs over. Mer could have him visit even if she was home, Pierce insisted. But yeah, OK, it was a little weird. Elsewhere, Eliza was evaluating the residents with Bailey and Richard when they got to Ben’s file. Minnick’s take? He’s a “utility player” but tended to play it safe and take no risks (since his earlier gambles). When Andrew asked Stephanie if she thought Alex and Jo were, you know, done-done, Edwards immediately knew that what he was really asking was whether the time was right for him to make his move. It was not, she said, pointing out that by dropping the charges against Alex in order to keep Jo’s new identity a secret from her husband, “You made a grand gesture, but she still hasn’t said anything to you, has she?” Er, no. Finally, Eliza had no sooner told Arizona to clear her schedule for the evening, as they’d be having sex for the first time, than into the ER walked young Liam, who declared that he had no parents.

By and by, Alex was called in to diagnose Liam, who began having a seizure. Turned out, he had a tumor that was going to kill him. Not that, upon arriving, his folks cared. Surgery was against their beliefs, so they simply wanted the boy discharged. “This probably seems a little unusual,” Mom told Stephanie, who couldn’t resist reiterating that what it really seemed was stupid. Naturally, when Alex learned that the boy had been discharged, he hit the roof. But, as Eliza pointed out, no doctor would — nor should he — dare to violate the religious freedom that enabled Liam’s parents to condemn him to death. Alex sensibly argued that the kid needed surgery, “not prayers and olive oil on his head.” The next day, Liam returned to Grey Sloan by himself — unable to see! “I did what they said,” he cried. “I prayed and I prayed.” But God hadn’t cured him. Would Karev? Yes. He’d lie that Liam became emergent in order to authorize surgery. After Amelia removed the boy’s tumor, Liam’s father expressed his gratitude by informing Alex that his medical career was over. Bailey warned Karev that he could go to prison for this. But he didn’t care — he was more than willing to do time for having intervened on Liam’s behalf. 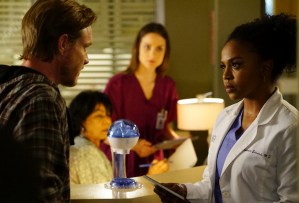 ‘YOU’RE GONNA BURN IN HELL’ | Watching Ben in action, Richard observed that, in fact, he was playing it safe. “I owe you an apology,” Webber later told Minnick. No big, she said. She’d become more concerned about Stephanie, whose file had revealed that she’d returned to work without any counseling after Kyle’s death and now became easily triggered by patients. Later, when Eliza questioned Stephanie about what Alex had done, Edwards protected him, insisting that, per the Minnick method, “I was running point.” As Liam’s father huffed and puffed his way through paperwork, Stephanie then got into it with him, saying that, yeah, God had helped Liam — by seeing that his father was “so weak and so stupid” and delivering him safely to the hospital. She even threw a tablet at him… which Eliza, of course, saw. Meanwhile, Richard asked Ben why he was covering the pit, not operating. Warren didn’t mind filling in where he was needed. But Webber pointed out that, since he wasn’t the only one making fellowship recommendations now, he might want to step up.

‘HOW LONG TILL I CAN GET BACK IN THE SADDLE?’ | After April discovered that Holly, a patient injured during sex, also had “a giant inoperable heart tumor,” Mer and Maggie wanted to try to save her. But all Holly wanted was to get back to screwing around until her tumor did her in. Too many times, she’d already heard doctor after doctor insist that they could come up with a plan to chase away the Grim Reaper, only to then wind up having to make them feel better when they couldn’t. When her one-night stand showed up at Grey Sloan, she asked Mer and April to just tell him that she’d died. April couldn’t bring herself to do that. But they had to admit, he was as cute as Holly had said he was. Maybe Kepner should tap that, Mer suggested. “You are a dark, dark person,” April replied. The next day, Maggie thought she’d cracked Holly’s case, but the girl still wasn’t interested. Eventually, Mer got through to Holly, and she agreed to the surgery. Alas, “the Sistine Chapel of tumors” had spread so far that it had bested Maggie.

‘WE HAVE TO SUPPORT THIS’ | Talking with Amelia about her earlier weirdness with Mer regarding Nathan, Maggie realized that her relationship must be fairly serious, if she was removing Derek’s tumor from her bedroom. So Pierce went back to her sis and told her that she’d be out late that night — super late, in fact. Yet Mer still cancelled on Nathan; she was struggling (but managed) to put her framed Post-It wedding vows in a drawer. The next day, Amelia filled in Maggie on the fact that Mer had bailed on Nathan. 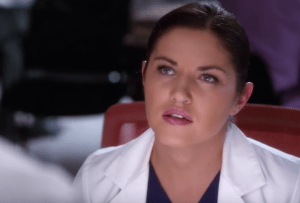 ‘I CAN’T WAIT FOR OUR NAKED PLANS’ | When Arizona told Eliza that she couldn’t make their capital-D date, Minnick was clearly bummed. To clarify that she, too, had been eagerly anticipating their first time, Robbins revealed that “I look for you all day, when I turn a corner… I hope that maybe I’ll just catch a glimpse of you.” And every time she did, it took her breath away. So, until they finally sealed the deal, there was no reason why the waiting couldn’t be deliciously hot.

‘I’M GUNNING FOR YOU’ | As the episode drew to a close, Andrew told Jo that talking to her was one of the only good things to come of the last year for him. “I know what you’re about to say,” she told him, “and the second that you say it… ” Aaand that was that. He didn’t even get to say it. Alex told Liam’s mother that he was expected to make a full recovery, and added that he’d made it to the hospital all by himself… blind… unless, of course, someone helped him. “The Lord helps those who help themselves,” she replied. In the locker room, Ben warned Stephanie that he was raising his game. But he wouldn’t be competing with her — her privileges had been revoked; she was being forced to get counseling. Alex made a phone call asking for a referral. Arizona and Eliza hit the sheets. And Mer told Holly’s one-time lover that she wasn’t going to see him again, it was time to move on. As she walked out of Grey Sloan, she took Nathan’s hand. Sweet.

So, what did you think of “Leave It Inside”? Hit the comments.