This week on The Flash, Barry & Co. were forced to face off against Caitlin aka Killer Frost, all building to the actual (audience-included!) reveal of who is nestled inside Savitar’s armor.

Coming off of Barry’s trip to 2024, Team Flash’s No. 1 priority was finding, protecting and nudging along Tracy Brand, the destined-to-be-great theoretical physicist who will invent a way to trap Savitar in the Speed Force… several years from now. But when they meet the scientist, she is a defeated, quirky grad student, ready to trade in her dissed dissertation on “extra-dimensional energy” for “Would you like fries with that?”

When it becomes evident that Killer Frost is pursuing Tracy as well — tasked by Savitar to “kill the girl” — Team Flash, led by a smitten H.R., take her under their wing at S.T.A.R. Labs, looping her in on her super-impressive, Nobel Prize-winning fate (as well as the scary-named baddies they are up against). Meanwhile, Cisco, after freezing twice when he had a chance to take down the ice queen — including after an ambitiously-CGI’d ice ramp chase through the Central City skyline — is confronted by Julian, who questions if Cisco will be able to do what needs to be done if the time comes. “I’m afraid of killing her!” Cisco barks back. “She’s my best friend,” and if push comes to shove, “I’d rather it be me than her” who dies.

When Killer Frost kidnaps Cecile, to trade for Tracy, Barry has a plan — except once they arrive at the warehouse meet-up, Killer Frost knows every sneaky trick Team Flash has planned, and more eerily every word that Barry will say. The stand-off leads to a showdown between Caitlin/Killer Frost and Cisco/Vibe, with the latter eventually emerging triumphant. Before Savitar shows up to whisk KO’d Killer Frost away, Cisco grabs a sample of her blood, which Julian hopes to use to reverse-engineer a cure.

Later at Joe’s — after he has (obviously!) come clean to Cecile about his Team Flash secrets, and finally echoed her “I love you” — something that Joe says triggers an epiphany for Barry. He speeds off to seek Savitar, declaring, “I know who you are.” Barry observes that the god of speed seems to know 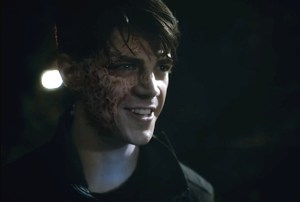 “everything about me, about Joe, about Wally, about Iris… our strengths and fears… how to use our love against us….” And that is all because Savitar “lived it,” Barry says. “You remember, when you were me.”

And on that note, Savitar extricates himself from his “strange metal” armor, and the person emerging is a late-model Anakin Skywalker-looking, scar-faced Barry Allen. “Like I told you from the beginning,” he grinned. “I am the future Flash.” But how? Who? (Time remnant?) And most pressing of all, why????

What did you think of the episode “I Know Who You Are”?