The series adaptation of Neil Gaiman’s 2001 novel American Gods, which gets underway on Sunday (9/8c), encompasses topics as sprawling as world religions, failed romance, the reach of technology, the meaning of death and the constantly challenged nature of belief.

Though you certainly don’t have to have read the book to enjoy the show, we thought we’d pull together a little field guide for those new to the Gods-verse, complete with input from the series’ creators and stars. So read on for a primer on the different types of deities and much more. 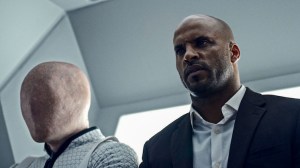 THE DEVIL’S IN THE DETAILS | American Gods‘ basic story is this: A man named Shadow Moon (played by Ricky Whittle, The 100) gets out of prison after a life-changing tragedy and just happens to run into a mysterious man named Mr. Wednesday (Ian McShane, Deadwood). Wednesday needs a bodyguard/driver/right-hand man, and Shadow reluctantly agrees.

Through a bizarre chain of events, Shadow soon learns that there’s a war brewing between old gods (like those of mythology and ancient traditions) and new gods (like technology and media). And he and Wednesday set out on a road trip to rally support for the old gods. Along the way, the pair encounters characters like a bruiser of a leprechaun named Mad Sweeney (Pablo Schreiber, Orange Is the New Black), the chameleon-like Media (Gillian Anderson, The X-Files) and the brutal Czernobog (Peter Stormare, Prison Break).

MAN PLANS, GOD LAUGHS | If you think all of this sounds too intense for Sunday-night viewing, series co-creator Bryan Fuller (Hannibal) understands. “We’re dealing with such heavy issues, and it’s easy to get lost in the sturm und drang of mortality and what we’re doing in this world, but you need levity and you need wit,” he tells TVLine, adding that he and co-creator Michael Green used “our instincts as writers to integrate that into the heaviness” of the source material.

EXHIBIT A | Unfortunately for Whittle, Shadow is more often than not the series’ straight man, which meant he had to get used to tamping down his natural comedic tendencies. “It’s tough for me, because I am flanked and framed by such wonderful, colorful characters,” he says. “It was a conscious effort to resist any kind of comedy.” Co-star McShane, who delivers plenty of zingers in the first few episodes, agrees: “You got the tough part.” 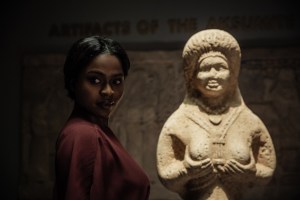 LADIES’ TURN | Female characters, like Shadow’s wife, Laura (Emily Browning, Sucker Punch), and the goddess of love Bilquis (Yetide Badaki, Aquarius), don’t take up a lot of real estate in Gaiman’s book — something he amended when conceiving the series with Fuller and Green. Laura, for instance, “only really exists in the book in relation to Shadow,” Browning says. “That was on eof the first things I talked about with Michael and Bryan. They obviously wanted her to be her own person and expand upon all of the female characters, which is important… I guess Michael and Bryan just wanted to make sure we had as much girl energy.” Badaki chimes in, laughing: “The way Bryan put it is that he didn’t want it to be a sausage party.” 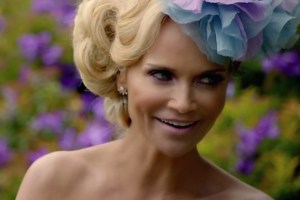 FULLER FAVORITES | It wouldn’t be a Fuller project if it didn’t feature some of his former collaborators: In addition to Hannibal alum Anderson, American Gods‘ cast includes Beth Grant (Wonderfalls) and Kristin Chenoweth (Pushing Daisies), the latter of whom plays the goddess Easter. In the book, “she’s described a certain way,” Chenoweth says, “zaftig and the goddess of fertility and the Earth. I was like, ‘I’m 4’11’. How does that work?” The series’ Easter is a bit tweaked from the book version, and Chenoweth said that change sparked some interesting conversations between herself and Fuller. “What made her the goddess of fertility? Is it self-appointed, or does she have lost children?” the actress says. “So we’re going to delve into that.”