A few days ahead of the debut of Bryan Fuller’s latest series, American Gods, may we please have a moment of silence for Wonderfalls, his hugely loved but ratings-challenged dramedy?

(Psst… that means hush it up for a sec, wax lion.) 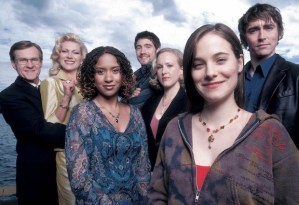 “I loved it so much,” says Caroline Dhavernas, who currently stars in Lifetime’s Mary Kills People and played Dr. Alana Bloom in Fuller’s Hannibal. Back in 2004, though, she was Jaye Tyler, a lovably grumpy recent Ivy League graduate who worked at a Niagara Falls gift shop and who thought she was losing her mind when some of the store’s trinkets — starting with that lion — started talking to her. As the series progressed, it became clear that the animals’ cryptic messages were designed to help Jaye make other people’s lives better, a duty she reluctantly carried out each week.

“I’ll never quite understand what happened,” Dhavernas tells TVLine. “I think it was politics. I think it was just being in the wrong place at the wrong moment, but it did have a life of its own somehow after… I think now maybe it would have worked better than it did back in the day.”

Part of the show’s difficulty in building an audience, she muses, might have come from its huuuuge competition. “I’ll always remember this, and this is more relevant than ever,” she recalls. “They put us on Thursday night against The Apprentice with Donald Trump.”

When we suggest that there’s an alternate universe in which Wonderfalls succeeded and Trump is somewhere, lamenting to a reporter about how The Apprentice got cancelled after four episodes, Dhavernas erupts into laughter. “I love that,” she says. “That can be the title of your article.”