The following casting news is out of this world: Saturday Night Live vet Nasim Pedrad is joining TBS’ People of Earth as a series regular. The announcement comes as Fox comedy New Girl, on which Pedrad has recurred for the last three seasons, remains heavily on the bubble.

The TBS comedy — recently deemed one of TVLine’s Peak TV Treasures — centers on a group of alien abductees living in the small town in Upstate New York. Pedrad is set to play Special Agent Alex Foster, who is described by the network as a “smart, dedicated FBI investigator getting a second chance after recently being disgraced.” She arrives in town “on the hunt for local newspaper owner Jonathan Walsh (played by Michael Cassidy), who is wanted for white-collar crimes.” 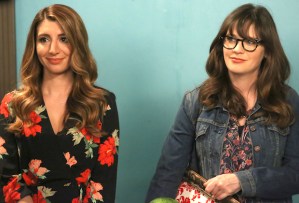 Pedrad first joined New Girl during Season 4, portraying Winston’s LAPD partner Aly. The two became romantically involved during Season 5, and were engaged to be married by the end of Season 6 — which would make her absence all the more difficult to explain in a potential Season 7. In addition to SNL and New Girl, Pedrad’s other TV credits include Mulaney, The Mindy Project and Scream Queens.

People of Earth Season 2 is expected to premiere this summer.

Are you psyched about Pedrad’s casting? Worried about what this could mean for New Girl? Drop all your thoughts in a comment below.